Strikeforce results and LIVE fight coverage for 'Fedor vs Henderson' on July 30 in Hoffman Estates, IL

Share All sharing options for: Strikeforce results and LIVE fight coverage for 'Fedor vs Henderson' on July 30 in Hoffman Estates, IL 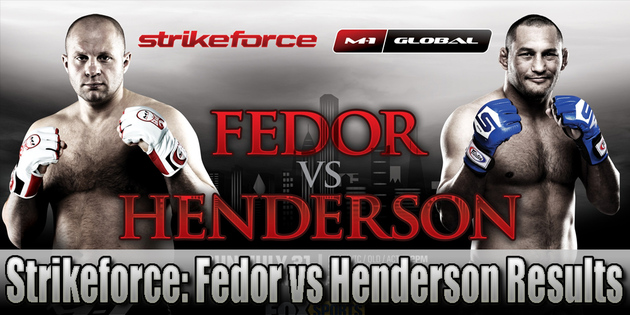 Strikeforce is all set to pull the trigger on its latest event TONIGHT (July 30, 2011) from the Sears Centre in Hoffman Estates, Illinois.

The Showtime-televised event will feature what could very well turn out to be the last stand of "The Last Emperor" Fedor Emelianenko, as he takes on fellow Pride FC veteran and current Strikeforce light heavyweight champion Dan Henderson in a three-round non-title fight.

In addition, Strikeforce Women's Welterweight Champion Marloes Coenen will defend her 135-pound title against number one contender Miesha Tate in the co-main event of the evening.

MMAmania.com will provide LIVE blow-by-blow, round-by-round coverage of Strikeforce: "Fedor vs. Henderson," beginning with the Showtime telecast at 10 p.m. ET, as well as provide quick results of all the undercard action as it gets underway earlier in the evening.

Without further delay, see below for the latest  Strikeforce: "Fedor vs. Henderson" results. (Note: This will go from the bottom up; therefore, scroll toward the bottom for the latest detailed round-by-round action):

Round one: Fedor comes out and throws wild punches. Hendo lands a left and backs off Fedor. Big right from Hendo and then a leg kick. Hendo with dirty boxing now and pushes Fedor against the cage. Fedor already bleeding from his right eye. Knees to the thigh against the cage from Hendo. More knees from Hendo. Hendo lands a wild left on the break but barely. Big right from Fedor now. Leg kick from Hendo. Right from Fedor and now he unloads with a powerful combo!!!!! Fedor is dropping BOMBS and has Hendo almost out!!!! Hendo slips out the back door and lands a VICIOUS right that puts Fedor flat on his face on the mat!!! Hendo now lands a few more bombs for good measure and that is it this fight is stopped!!!!!! WOW UNBELIEVABLE KO from Henderson. It came literally out of no where!!! That was INSANE!!!

Round two: *Sorry Technical Difficulties here is round summary* Coenen gets a reverse on a take down attempt and is working the back with a body triangle looking for a choke. Coenen is now going to hooks. Coenen works punches and elbows while going for the choke for the majority of the round. 10-9 Coenen.

Round one: Woodley with a low stance looking for the take down. Good right from Woodley. Inside leg kick from Woodley. Woodley catches a kick and now bullies Daley up against the cage. Low knee from Daley stops the fight for a minute. Woodley misses a flying knee and big right but he is aggressive. Woodley charges and pushes Daley against the cage now. Knees to the thigh from Woodley. Ref breaks them. Daley misses with a big combo, Daley throws an uppercut and Woodley pushes him against the cage once again. Daley with good take down defense. They break and Daley takes a breath. Good right from Woodley and now their tied up again. Woodley briefly goes for a standing guillotine. Good body shots from Woodley. Daley reverses and is now in the dominant position but Woodley gets position back as both men trade knees at the bell. Boring round, but all Woodley. 10-9 Woodley.

Round two: Woodley ducks under a combo and grabs Daley briefly. Daley stuffs another take down and now pushes Woodley agains the cage. Woodley drives for a take down but nothing there now he lands some knees to the body. Woodley finally gets a single leg take down and is now in full guard. Good punches from Woodley. Good elbows from Woodley. Woodley pushes Daley against the cage and Daley trying to walk the cage. Daley back down in full guard and Woodley lands an elbow. Good elbow from Woodley. Ref stands them up now. Woodley shoots and Daley sprawls out. Daley lands two hammer fists at the bell. One more for Woodley, 10-9 Woodley.

Round three: Woodley lands a good right and a knee. Daley looking for an uppercut. Daley goes for a knee and Woodley catches it and gets the take down. Daley going for a arm, but Woodley muscles out and is landing solid punches from the top to the body and head. Forearms from Woodley. Daley getting desperate trying to walk the cage. Daley kicks away and walks up and Woodley holding onto a leg trying to get it back to the mat. Daley finally to his feet and sprawls out and lands a good left hook. Daley on top now and lands some strikes to the back of the head and gets warned. Woodley looking for a leg and Daley lets him up. Woodley right back for a leg and Dlaye sprawls out. Daley lands a good uppercut and a knee. Another knee from Daley and Woodley drops for a leg again. Daley rolls through for an Oma plata!!! Woodley gets out and is on top in full guard now. That is the bell and this last round was close Daley could have taken it but I think Woodley still gets the nod. 10-9 Daley.