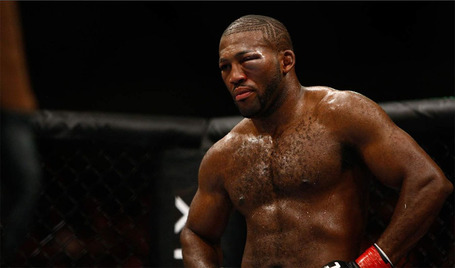 John Howard has been cut from the Ultimate Fighting Championship (UFC) following his third straight loss, a less-than-stellar performance against fellow welterweight Matt Brown.at UFC on Versus 4 back on June 26 in Pittsburgh.

Before his defeat to Brown, "Doomsday" suffered a unanimous decision loss to Thiago Alves at UFC 124 as well as a technical knockout loss to top contender Jake Ellenberger at UFC on Versus 2.

It looks as though his much talked about grudge match against Anthony "Rumble" Johnson will have to be put on hold ... for now.

More after the jump...

When the UFC signed John Howard in 2009, his star could hardly have been rising any faster. He was coming off of three consecutive wins, including a victory over current UFC welterweight contender Charlie Brenneman at Ring of Combat 21.

Howard kept his string of victories going by winning his next four fights (which were his first four fights in the UFC octagon). The streak included two knockouts against veteran Denis Hallman and "Scrap Pack" member Daniel "Ninja" Roberts. The KO against Roberts earned Howard the "Knockout of the Night" award bonus for the UFC Live: Vera vs. Jones event on Mar. 21, 2010.

Unfortunately for Howard, UFC President Dana White has always employed a "What have you done for me lately?" mentality when it comes to his fighters.

Over the past year, 'Doomsday' has become more famous for his outside-the-cage chatter and pre-fight banter than for his actual fighting. He has famously engaged in a verbal sparring match between UFC welterweight Anthony "Rumble" Johnson.

The move should light a match under the rest of the welterweight division, which has become a very competitive place to be for UFC fighters.

There has been no word yet as to what Howard's next career move will be, though manager Malki Kawa has said that they are already fielding possibilities for a future fight.

What say you, Maniacs? Did Howard get a fair shake? Will he ever work his way back to the UFC mothership? Will he get his grudge match against Johnson?