Share All sharing options for: Referee in Kim Couture vs Sheila Bird fight under investigation by Calgary Commission 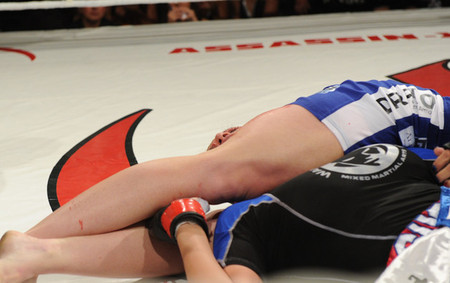 Justice may not be lost after all.

AX Combat 1, an event held in Calgary, Alberta, Canada on July 8, featured a co-main event of Kim Couture vs. Sheila Bird, a fight won by the latter with a scissors choke in the first round.

The referee in the bout has since come under fire for his decision making process while Bird had the choke locked in. The short version of the story (read the long version with a detailed breakdown here) is that the ref in question failed to stop the fight for a full 10 seconds while Couture was completely unconscious.

Thankfully, fight fans aren't the only ones with a problem with this. According to MMAWeekly.com, the Calgary Commission is launching an investigation into the matter:

"This matter is under review by the Calgary Combative Sports Commission and until a thorough investigation has been conducted there will be no further comment."

Comments were also made in the full report by Couture herself, who is in decidedly better spirits than she probably should be. The high road can be difficult to travel but that's exactly what she's done.

Here's what she had to say about the fight:

"I'm fine. I woke up and I thought the fight was still going on. Once I realized what was happening, I stood up and waved to the crowd, but I'm fine."

The air on the high road is clean, indeed.

It's certainly well-received news after most reports stated that after the ref finally broke up the choke, Couture was out on the mat, prone and convulsing for an entire minute.

Oh how long 60 seconds can be.

All's well that ends well, at least on "Suger Free's" end, but the referee may not, and in my opinion, should not, be so lucky.

Thoughts on what actions will or should be taken in this matter?