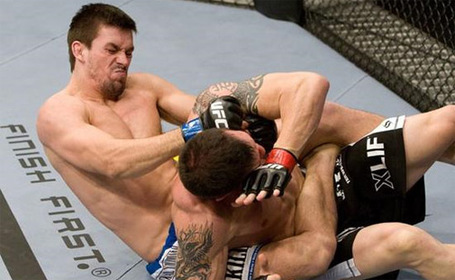 UFC 131 is set to go down this Saturday night (June 11) featuring a heavyweight clash between possibly the two most feared strikers in the promotion's heavyweight division. Junior Dos Santos will try to vault himself into a title shot against division champion Cain Velasquez by dispatching heavy-hitter and former Interim Champion Shane Carwin.

But before these two giants collide inside the Octagon, a pair of contending middleweights will do battle as Mark Munoz and Demian Maia will showcase one of the more interesting style clashes pitting an All-American wrestler against a world champion jiu-jitsu practitioner.

Munoz is a NCAA Division 1 champion wrestler out of Oklahoma State University. "The Philippine Wrecking Machine" dedicated himself to the sport in 2007 and has made an impressive run in the UFC's 185-pound division.

Maia, one of the more notable grapplers in the sport of MMA is a former ADCC and Pan American champion. He has translated his jiu-jitsu effectively into cage fighting as evidenced by his four "Submission of the Night" bonuses with wins over Ed Herman, Nate Quarry, Jason McDonald and Ryan Jensen.

After the jump, we will look at his most high-profile submission victory to date.

In February 2009, Demian Maia faced Chael Sonnen at UFC 95: "Sanchez vs. Stevenson" in a middleweight bout with heavy title implications. He was still undefeated at that point (10-0) and won his first four UFC fights by way of submission.

Maia was looking for an impressive showing to place himself high atop the divisional and would need less then a round to accomplish his goal.

After a combination sent Sonnen back-first into the cage, Maia completely stole the show against the fighter who on paper was supposed to be the superior wrestler.

As you see in the above clip, Maia has double underhooks while pressuring Sonnen against the fence. He throws a knee to the midsection that immediately causes his foe to make an attempt to push forward.

Chael pushing forward makes this takedown possible. Maia uses that momentum and sweeps the left leg of Sonnen while simultaneously dragging the upper body down. He sweeps Chael right into a side control position but as soon as he hits the ground he begins working.

The best grapplers in the world hit the mat and immediately begin to work, whether it be to attack with a submission or to improve position.

As soon as the right hip and leg of Maia hit the ground, he continues to use momentum to his advantage and he quickly throws his left leg up and over Chael into the mounted position. In most scenarios, Maia would look for an armbar or possible an arm-triangle from this position which would be less high risk in terms of losing position.

When gaining the mounted position, the Brazilian is able to isolate the left arm of Sonnen by trapping it beneath his own leg. Once again using Chael’s momentum, he attempts to buck out of the mount and Maia smoothly allows him to continue the roll while securing the right leg up and over the top of Chael’s neck.

From there it is all textbook grappling as Maia hooks the left leg up over his right ankle and locks in the choke. He thrusts his hips forward and pulls down on the head, increasing the pressure of the choke and securing the tapout.

Maia once again showcases his high level Brazilian Jiu Jitsu (BJJ) and secures a bout against fellow contender Nate Marquardt where he would go on to suffer his first career defeat.

Maia has not had a submission victory since tapping Sonnen over two years ago across the span of five fights. Will all that change on Saturday night against Munoz?