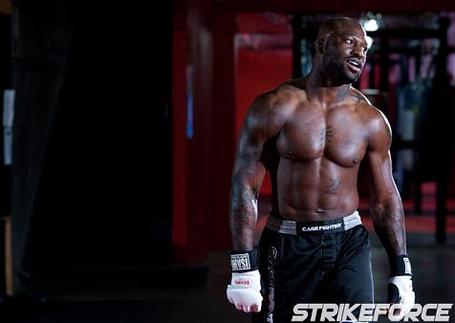 Pick your poison for this match-up, as former Light Heavyweight Champion Muhammed Lawal has been booked to hit the mat with grappling sensation Roger Gracie at the upcoming July 30 Strikeforce event in Chicago, Illinois.

Lawal hasn't been seen since Aug. 2010, when he dropped his 205-pound strap to Rafael Cavalcante in his first title defense after winning the belt from Gegard Mousasi.

To add injury to insult, "King Mo" blew out his knee in the process that forced him out of action for an extended period of time.

But he's back now and ready to bring a hype train to a halt.

After injuries and a myriad of other problems kept Roger Gracie from competing, the Abu Dhabi Combat Club (ADCC) Superfight Champion finally made his Strikeforce debut at the "Heavy Artillery" Showtime event last May 2010, strangling Kevin Randleman to notch his third win in as many tries.

The victory was Gracie's first on U.S. soil since throwing his hat into the sport way back in December 2006.

He followed that up with yet another submission victory, a first round choke out of well-traveled veteran Trevor Prangley.

Lawal is a big step up for the budding mixed martial artist; can he handle it?

Stay tuned to MMAmania.com for more on this still-developing fight card.