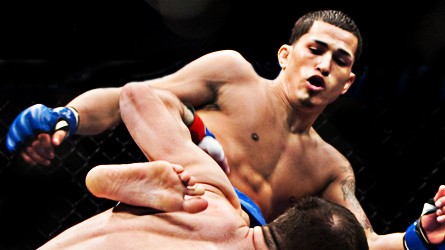 2010 was one hell of a year for Anthony Pettis.

The Duke Roufus trained lightweight entered the year having just tasted defeat for the very first time in Dec. 2009, a rough and tumble split decision loss to Bart Palaszewski.

Hard to believe, but that's the worst he's had to deal with throughout his young mixed martial arts career.

By the time 2010 was over, Pettis had fought four times, winning all four fights in spectacular fashion. One knockout (Danny Castillo), two submissions (Alex Karalexis, Shane Roller) and one decision (Ben Henderson) that earned him the WEC lightweight championship and was almost unquestionably the "Fight of the Year."

UFC fans are perhaps most familiar with him for the incredible running cage kick he landed on Henderson at WEC 53, a feat he accomplished in the last minute of the last round of the last fight in the history of the promotion.

He deserves all the accolades for that astonishing feat, something we may not ever see again in elite competition in such a high-profile fight.

Sadly, it's entirely possible the majority of fans only know his highlight reel kick of "Bendo" and nothing more. It seems a shame his other brilliantly efficient work has largely gone unappreciated.

Today, we bring you his crushing head kick knockout of Danny Castillo at WEC 47. This is not a breakdown of his technique nor a comprehensive look at the fight. It's simply a short video showcasing his immense talents.

It's also a reminder of what exactly Pettis is capable of. In watching the video you will see how similar this high kick is to the one Diego Sanchez landed on Clay Guida at The Ultimate Fighter (TUF) 9 Finale in June 2009.

Does a similar fate await "The Carpenter" tonight when he goes head-to-head with Pettis at the TUF 13 Finale on Spike TV? Stay tuned.

Until then, enjoy this sweet destruction (courtesy of Yahoo! Sports):