Anthony Pettis: No amount of heart will save Clay Guida from my left high kick

Share All sharing options for: Anthony Pettis: No amount of heart will save Clay Guida from my left high kick 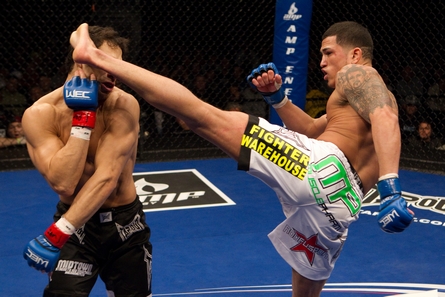 The renowned Roufusport star has all eyes on him entering this fight and he's ready to give MMA fans a new memory, perhaps even better. He plans on making a big splash with a shot at the UFC title within his grasp.

Pettis was a guest on a special edition of Pro MMA Radio this week and he detailed the Edgar-Maynard situation, his infamous kick and, of course, his upcoming fight with Clay Guida.

Find out why he chose Guida for his UFC debut after the jump.

Anthony Pettis: I'm not sick of it but I definitely don't want to be remembered just for the kick. It's like a Catch-22. I'm hear things like, "he's getting all this publicity from the kick, all this hype but he's not a good fighter." I just want to prove that I'm not just a kick. I've got the skills to back it up.

Pro MMA Radio: Do you feel that people sleep on your other skills because that kick was so exciting, so out of the ordinary taht people forget that you're an awesome striker with great jiu-jitsu and you've shown improved wrestling over these last few fights. Nobody's talking about that. Is that almost a good thing, Anthony, that they're focused on one thing that's not something you do all the time?

Anthony Pettis: It's a good thing in a sense of opponents-wise but UFC guys won't buy into the hype or get into all that. As far as fans, fans that weren't really dedicated WEC fans, they'd never seen any of my other fights so all they do is remember me for the kick. It's an awesome move, but guys that haven't been following my career think that's all I have.

Pro MMA Radio: Let's talk about the decision to take a fight. Let's go back to Maynard-Edgar 2. Who do you think won that fight?

Anthony Pettis: I said it right after the fight. I thought Edgar did enough to win the fight. For sure Maynard demolished him in the first round but I thought Edgar took all of the other rounds. Initially I thought Edgar won but I was sitting next to Wanderlei Silva and he said, "I'm giving that to Maynard," and I thought, "oh boy, we might have a problem here." Different views of a fight.

Pro MMA Radio: So now, it's a draw and you're sitting there waiting and they were probably going to bring you in the cage afterwards. That moment is gone. Take me through what was in your head that moment when you hear that it's a draw.

Anthony Pettis: At first I was like, "man, this sucks! What happens now? What happens to me?" For me, the title shot was just an added bonus to everything that already happened. It wasn't like, "I deserved this shot, it's mine and no one can take it away from me." People were asking me like, "are you mad you're not getting a title shot?" I'm not really upset that I'm not getting a title shot. I came to the UFC to fight and this gonna be my debut fight in the UFC. It's gonna be easier not having to fight for the title or fight five rounds. I get to warm myself up in the division and show I belong here.

Pro MMA Radio: What factored into the decision to take the fight with Guida instead of waiting for a title shot?

Anthony Pettis: The biggest factor in the decision to take a fight was exactly what happened. "What if these guys get injured?" First thing, what if these guys get hurt and I don't fight until I'm 25? I would lose a whole year of my life not fighting. I turned 24 at the end of January and I can't wait a whole year of my life sitting on the sidelines. Why not just get in there and mix it up. Do what I'm here to do. I'm a UFC fighter and that's what my decision came from. It was the best decision I made. If I had waited for the title shot, who knows when I'd be fighting again?

Pro MMA Radio: Now that Maynard and Edgar are both injured, which made your decision look brilliant. Who do you think wins the third fight?

Anthony Pettis: I'm gonna go with Edgar from the last four rounds. I think he outwrestled him, he landed more punches. It wasn't the big punch that landed like Gray Maynard's first punch but as far as more punches, I think Edgar did the better job throughout that fight.

Pro MMA Radio: Are you surprised that Gray came out and had some negative comments directed your way? He referred to some of the guys that you beat in the WEC as "scrubs" and maybe focused more on the kick than your other skills?

Anthony Pettis: I was definitely surprised because I've met Gray before, I've talked to Gray before. He was more of a quiet, humble guy. He shook my hand, congratulated me. I didn't think of him as a friend but I thought it was some cool mutual respect but I guess he thought otherwise. For me, it just makes me smile that the number one contender is talking about the last WEC lightweight champ. He has a title to win but he's talking about me. That just makes me smile. I'm doing something right.

Pro MMA Radio: Let's get to Guida. I had heard that you had several options presented to you and you chose to fight Guida. Is that true?

Anthony Pettis: Yeah, very true. After the title shot that was promised and didn't happen, I met with the team and they said, "well you can wait for your shot or you can pick somebody to fight." Guida fought the same night and I remember that fight, it was a big fight. He's coming off three big wins and his style is very similar to what I'd be facing after him, lots of wrestlers so I think Guida would be a perfect opponent. He has a big name and he's definitely a test. He's not an easy opponent ... I went to them and said, "If I'm gonna fight, I wanna fight Guida." I look at Guida as a top guy for sure. He trains at Greg Jackson's camp and that was a great decision for him. He's on a hot streak right now.

Pro MMA Radio: Top guy or not, I have to think that you don't choose a guy unless you think you can beat him.

Anthony Pettis: Yeah, it's one of those fights I thought like I knew I could win. Honestly, if I want to be the UFC lightweight champion, I could have chose anybody to beat but match-up-wise, it's a good fight to prepare for ... Clay as an opponent is an aggressive guy. He's tough as they come. He keeps coming and doesn't stop. He's got a great gas tank and his battery is just on full the whole time. To prepare for a guy like Clay you have to look at his losses, K-Flo and Diego Sanches, guys that beat him or finished him. The guys he lost to, he doesn't do well against good strikers that know how to use their range. His big advantage is to get body-to-body, lock you up and take you down. My big thing is to keep my range. Do what I do best. Stay in range, surprise him with my wrestling and takedown defense and just not let him impose his will. I can't let him break me, like Mac Danzig, he was just frustrated, couldn't get up and he gave up. In fights, it looks like he's doing a lot of stuff because of his hair. He holds you down and moves his head and the ref is like, "he must be working." You can't let him suffocate you. For me, it's going to be keeping my range and picking him apart.

Pro MMA Radio: It's your first fight in the UFC and a lot of people talk about "the jitters." Is there any concern about that or does it help that this is a smaller venue and you've fought here before?

Anthony Pettis: It definitely helps. I've fought at The Palms twice already, one loss and one win there. I really don't get the jitters or stuff. My WEC debut was in front of 17,000 people at Arco Arena when I fought so it's not a big deal to me.

Pro MMA Radio: Where do you think Clay's wrestling compares to Ben's and Shane's wrestling?

Anthony Pettis: I don't think it's the same style. I think Clay's wrestling is adapted very well to his style of MMA fighting. He does well with his crazy wild punches into takedowns and he does it at the right times. I don't think he's a very technical wrestler. He just commits to it and he either finishes the takedown or leans you against the cage and squeezes everything he has into it.

Pro MMA Radio: Clay's coach Mike Winklejohn said that you won't have an answer for Clay's heart. How would you respond to that?

Pro MMA Radio: After the fight, we're still waiting for Frankie Edgar and Gray Maynard's injuries. If you win, it'll probably be a 5-6 month wait for a shot at the belt. Would you be willing to wait or would you take another fight?

Anthony Pettis: Definitely take another fight. That title shot is going to be there either way. I'm gonna take another fight. I'd take two more fights. Like I said, I'm here to fight. If I can't beat the guys who are trying to get where I'm at then I shouldn't be fighting for the title anyways. You know as well as I do that the more you fight, the more you get paid.

So does Pettis have his head in the right place as he rolls into his UFC debut tomorrow night? How does he fare against "The Carpenter?"

For more on Anthony Pettis, check out the replay of MMAmania.com's exclusive presentation of Pro MMA Radio by clicking here.