UFC on Versus 5: Donald Cerrone vs Paul Taylor booked for Aug. 14 with John Makdessi injured

Share All sharing options for: UFC on Versus 5: Donald Cerrone vs Paul Taylor booked for Aug. 14 with John Makdessi injured 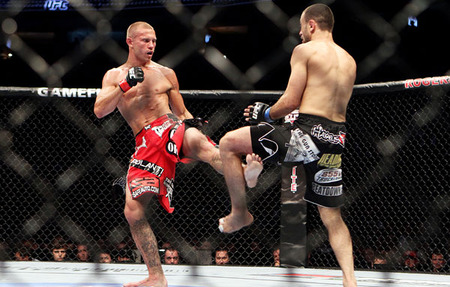 Lightweight John Makdessi has suffered an injury that will force him out of his planned date at UFC on Versus 5 on Aug. 14 in Milwaukee, Wisconsin.

Donald Cerrone will step in to take his place in a match-up against Paul Taylor, potentially on the main card of the upcoming cable television broadcast, according to ESPN.

Cerrone's (15-3) been riding dirty through the UFC lightweight division since making the jump from the now defunct WEC promotion earlier this year.

He's rattled off two very impressive wins, over Paul Kelly and Vagner Rocha, respectively, and he's got no qualms with taking a short notice fight in his attempts to get up to win number three.

If he can do it, it would give him five in a row. Time to make him a contender?

Standing in his way is the "Relentless" Paul Taylor (11-6-1), who is coming off a highlight reel knockout.

The hard-hitting Brit dimmed the lights for Gabe Reudiger with a punishing head kick back at UFC 126: "Silva vs. Belfort" earlier this year.

The win over "Godzilla" snapped Taylor's two fight losing streak and gave him an even 1-1 record in his new digs at 155-pounds.

UFC on Versus 5 will feature a bevy of marquee match ups, including Dan Hardy getting one last chance to go out on his shield against Chris Lytle.

In addition, surging lightweight contenders Jim Miller and Ben Henderson will square off in a bout that may very well go a long way in determining the next number one contender to the 155-pound title.

To check out the latest news and notes for the promotion's upcoming trip to Milwaukee click here.