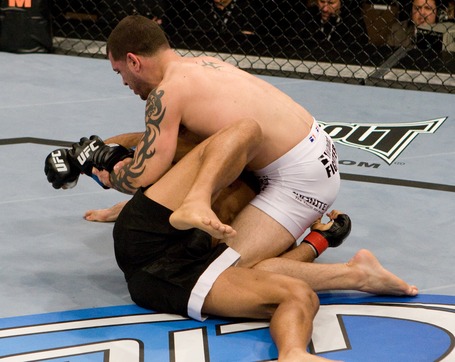 Welcome back to another installment of MMAmania.com's "Ultimate Submissions" where the focus is put on the breakdown of different combat submissions. In mixed martial arts (MMA), the outcome of any fight can be altered or decided with a huge blow, knocking your opponent down in a single strike.

Or a single submission.

It may take a little longer to set up, but the results remain the same. Make one small mistake in body positioning or arm placement and you will quickly find yourself in a world of pain from any number of joint-lock submissions.

After deconstructing other limb-oriented submissions such as the heel hook, knee bar and arm bar, we will shift our focus once again away from chokes and onto the painful and bone-crushing locks that have forced many talented combatants to tap.

Follow me as we take a closer look at arm locks, specifically the Kimura and the Americana.

Named after its innovator, Masahiko Kimura, the submission is a double wristlock. The Kimura submission is sister to the Americana which we will get into shortly. It requires space behind the opponent to be effective which is why most uses comes from your own guard. It is also used frequently when you have side control and can torque the arm you are attacking behind your opponent.

You will need to attack that arm very swiftly if you hope to get the "figure-four" lock on the arm. Grab the wrist firmly on the controlled arm with the hand that is closest to your opponent's head. If you are on the right side of their body, this would be your left hand on their right wrist. It is very important to get the right configuration of your hands to pull off the submission.

From there, you will pull your opponents arm up where their elbow is pointing towards your face. This is where control will be a key. They will try to buck out from under you or posture up and pull out if on top of you. If you are in your guard make sure to wrap your guard tight and keep them close, if you are on top, try to get to the knee on belly position.

Slide your other arm under your opponent's elbow and grab your own wrist on the opposite arm. This is through their trapped arm and attaching to your own. This is the "figure-four" lock. Quickly, rotate around your opponent's head if you are on top. If on bottom, keep pressuring the hold behind and away from the body. Being smooth as possible (and fast) will help increase the success level of the hold.

By controlling your opponent's body and cranking the arm away from your opponent, the shoulder joint and elbow joint will begin to succumb to the pressure prompting the pain to secure the tap out.

Escaping will be easier said than done. Since the submission is a hold really dependent on strength, you are immediately outnumbered two hands to one as your opponent will be attacking with both of his arms.

Kazushi Sakuraba made a career of thrilling, rolling Kimuras. While not in the conventional form of setting up the submission from guard, it was effective nonetheless.

While standing, Sakuraba turns his back to Renzo, as he does so he isolates and attacks the left arm. While jockeying for position, the two scramble as "The Gracie Hunter" comes up with the upper hand and begins torquing the arm with a figure four lock behind the back of Renzo. As the fight hits the ground, Sakuraba positions himself on top and stays heavy, leaving little wiggle room for Gracie to escape.

With the figure four lock already set up, Sakuraba continues to torque the angle of the submission until the referee calls a halt to the bout.

This submission is often labeled a ‘keylock" or even more descriptive a "Lateral keylock" and is very similar to the Kimura. The Americana attacks the shoulder, elbow and wrist of your opponent and much like the Kimura, will require you to attack your opponent’s single arm with both of yours.

Generally, the Americana is best achieved when set up from side control of your opponent. You will find best results attacking with the same hand as you are using. For example, if you plan to attack his right arm while you sit on the left side of side control, you will use your own right hand to pin and isolate.

With that attacking hand you will pin the wrist down to the mat preferably with the entire arm sitting at a right angle and palm facing skywards. A key tip to go by is to make sure the wrist grip is an overhand one with your thumb facing your own body and stray from wrapping the thumb around the wrist.

Keep your opposite arm's elbow next to your opponent's ear if possible; this will give you great space to execute the hold. The elbow placement will help tremendously in making sure the 90-degree right angle is set. You will then snake your opposite (in this case left arm) arm under your opponent's bicep and clasp on to your right wrist, thus gaining the figure four similar to that of the Kimura.

From there the submission is locked in and all that needs to be done is executing the technical aspect of the hold. "Turn the lock" is a great way to describe what comes next. Slide your opponent's wrist towards the lower body while simultaneously raising the forearm/elbow which will put extreme pressure on the joints.

The torque of the hold should secure the tap quickly.

When being trapped in a keylock or Americana it is important to act swiftly in that once the hold is locked in, pain will set in very quickly. In the same aspect as the Kimura, you will be facing long odds being trapped by two arms on your single, isolated arm.

If you are on the bottom being controlled by your opponent you will want to avoid the "lateral" movements, so attempt to point your elbow and arm towards your opponent's face which will make it much more difficult to finish and buy you some precious time.

You will want to power your elbow/arm as if you were throwing an elbow strike from the bottom and in doing so, attempt to maneuver your elbow into your opponent's bicep and ideally inside of his bicep. This stops the ability to torque on the hold.

With this time and space you have created, use your free arm to create space between your body and your opponent's, enough to snake in a leg or even just a knee. Use that leg or knee to explode upwards thrusting your opponent off you and if you muster enough power you can land on top of your opponent.

This tends to also work while defending the Kimura.

In a bout between two black belts (above) we were able to see the much more talented grappler when Gabriel Gonzaga slapped on this Americana against Justin McCully. "Napao" has McCully mounted in a very bad position.

In the beginning of the clip, you can see the figure four is already latched on to McCully by the massive arms of Gonzaga, being a powerful grappler makes this submission even more dangerous to get caught in.

Gonzaga begins to push down on the wrist while laterally torquing the arm skywards and he stays very heavy in his mount which prevents any sort of escape from happening. From there it is only a matter of pain threshold by McCully until the tap out comes.

Until next time Maniacs...