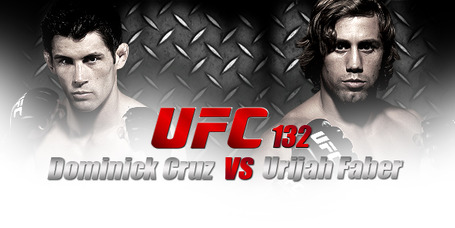 Attending today's call will be UFC bantamweight champion Dominick Cruz and former WEC featherweight champion Urijah Faber, who will be headlining the event as they battle for the 135 pound title.

The last time these two men fought, it was Cruz vying for Faber's featherweight title and he was quickly stuck in a guillotine choke and forced to tap in the first round. The roles have now been reversed as Faber is dropping down to bantamweight to challenge for Cruz's title. Cruz is out for revenge as his loss to Faber is the only blemish on his record.

Also on the call will be UFC 132 co-main event fighters Wanderlei Silva and Chris Leben. Silva is fighting for the first time in over a year after recovering from knee surgery while Leben is looking to rebound after running head first into Brian Stann's heavy hands at UFC 125 earlier this year.

Brian Hemminger here. The call is expected to begin shortly

On how the bad blood between each other makes it easier or more difficult to train and prepare.

Urijah Faber: it doesn't make it easier. I've never really been an emotional fighter but that's because I usually feel indifferent or like the other guy. In a real fight, it would be because I don't like the guy so it makes it easier.

Dominick Cruz: I'm not real fond of Faber but at the same time, I fight just as hard as I'm fighting someone I like. You find out a lot about each other when you get in a fight. We'll see how it goes. At the end of the fight, I'm gonna take it in stride.

On if they will bury the hatchet after they fight.

Urijah Faber: The last time we fought we didn't settle anything.

on how they are different.

Dominick Cruz: The only thing different about Urijah is his haircut and his years. Everything is different for me, my striking, my kicks. He'll be fighting a whole different person.

Urijah Faber: I've been working with a whole new training system. My hands have improved. I'm smaller and faster and at my more natural competition weight. I feel like I'm in the prime of my life. You're looking at a guy that's never been better in my eight year career.

On how the loss has played on his preparation

Chris Leben: For me it's huge. For one fighting Wanderlei definitely makes me train a little harder. For two, there's nothing more motivating than a loss. I want to show people, "hey, I'm better than what they saw." With the Brian Stann fight, I want to go out and get back on the winning side and there's nothing better than a win over Wanderlei. It would be huge.

On headlining a UFC card

Dominick Cruz: It's an honor to be headlining a card alongside some of the legends that I grew up watching like Tito Ortiz and Wanderlei. I'm honored to be representing the UFC bantamweight division. I'm going through the exact same rituals, the same exact preparation, there's just the reward at the end that's bigger.

Dominick Cruz: I'm confident in my preparation. I've fought many main event fights in the WEC and I went the distance in both of them. There's no better way to prepare for a fight than what I did in the WEC. I'm not worried about it at.

Urijah Faber: It's hard for me to go back and forth and remember how I felt before every fight. I know I'm ready for this and I'm excited for it and a little bit antsy about it. Every single fight I get into, the sport has grown leaps and bounds and it's skyrocketing. I'm in the middle of it and it's exciting.

Urijah Faber: I don't really fret about that kinda stuff. My lifestyle, my demeanor is just like I'm really enjoying what I do all the time. I've had 29 fights and I think 21 of them is some sort of title shot. People always seem to be asking me about what it's like to fight in a title fight. I've lost to four people in my career and they were all bigger than me or considered the best at that point in time. I don't sweat about that sort of thing.

On dealing with his injuries and setbacks

Wanderlei Silva: It was not easy. I like to be inside the Octagon and fight my whole life. It was a tough year. I have unbelievable support from my fans. They support me every day. I really want to give them a good show because it's hard to be the side. I want to show the real and the best Wanderlei Silva.

On training with Rafael Cordeira again

Wanderlei Silva: He has 16 different guys fighting in Strikeforce and the UFC. I train with Babalu, Werdum, Shogun and it's so tough and they kick my ass every day. They make me stronger. I'm rooting for all of them inside the Octagon. My target is really good right now. I've had the best camp in my life.

On what he learned from the Brian Stann fight.

Chris Leben: I've had a lot of fights and I got a little comfortable after my three win streak. I underestimated Brian Stann. I didn't focus on my diet enough. I came in a little too heavy and I cut too much weight. This time, I'm really, I'll be honest, I'm excited to fight Wanderlei and I'm a little scared. It's a very motivating and driving emotion. I'm focusing on my diet and I'm in the gym 110% and I'm putting everything in because I want to win this fight. I'm eating a bunch of crappy food that's good for me and I'm doing all the stuff that I'm supposed to.

On how things have changed since the merger as a bantamweight

Dominick Cruz: The division is exploding. I think 135 and 145 are getting a lot more recognition than four years ago. it's exciting to represent the weight class. Fighting at 145 pounds, I was actually 10 pounds lighter than I am at 135 pounds. I'm cutting a lot more weight and it's harder to make the weight. When I cut that weight, I feel like I sacrifice the last little bit to get out there and get that "W."

On calling out for Wanderlei a year ago

Chris Leben: From one point, it's "be careful what you wish for." When Joe [Silva] called me and said "you got it" I just went back to training. Losses are never good. i went to counseling for my last loss. Wanderlei was slated to fight Akiyama and he got injured. I stepped in there and won that fight and for me I felt like I earned that fight. It took a while for the UFC to come around to it but here we are.

On if he something to prove

Dominick Cruz: Part of the reason I wasn't on that poster and didn't get the respect is because I didn't do the media. I felt at the time that I didn't need to do it because I'd go out and get the win first. Being a fighter is a 24/7 job. You've got to do the media, do the twitter, do everything on top of training. I feel I've got a lot more respect than I have in the past. I've just gotta go out and do my exciting fights and winning will take care of the rest as well as the media I've been doing now. That's how the fight game works.

Urijah Faber: Definitely. I'm here in a new weight class and the bottom line is I'm the best 135-pounder in the world and I'm going to prove it. Dominick is a tough guy to track down and I'm going to prove that I'm not the same guy he's been fighting, the guys he's been getting decisions over in all these fights. I'm gonna fight to the bitter end.

On getting over his loss

Chris Leben: We've all had our wins and losses. The bottom line is you've got to get back up on the horse. This is going to be my fight in the UFC. A loss isn't going to make me perform bad the next time. I don't lose all the believe in my self that I had before hand. I look at myself and look at what works and what didn't work. This sport is a continual learning curve. I never stop learning. Our life outside the fights, our diet, everything outside the fight I'm trying to change and tweak. How can I get the best out of myself?

On if the bigger cage helps him out

Dominick Cruz: I think it definitely is. A lot of people try to cut me off and push me into the fence. At the same time, I'm very offensive. While it's a big cage, it's not like I'm going to be running the whole time. i throw a lot of punches and I'm going to let everything out and try and get that finish as soon as possible. The big cage, while it's going to be good for my movement, I'm going to go in there and lay hands on whoever I'm scrapping.

Chris Leben: I ain't retiring any time soon that's for sure. I fight for a lot of reasons. As long as my body's gonna let me, I will keep going. I see how much motivation it gives other people around me. I don't like fighting. I like the training but I think most fighters would agree with me. I don't see myself throwing in the towel.

Chris Leben: Wanderlei is an animal. There's nothing more motivating than a fear of a coma. I'm so exciting to fight Wanderlei Silva. He's one of my heroes. He's one of the reasons I fight. I used to get bootleg videos of him and I would try to emulate stuff that he did. You have to beat the legend to become the legend. This is like the passing of the torch at least that's what I hope for. I might be a little worried but I'm going to get out there and do what I do and look my fears in the eye and conquer them.

Chris Leben: In the past I've fought guys against guys that I thought were better than me and I ended up winning. It's easy to put those feelings of admiration away when they start swinging at you. I'm a reactive fighter. I'm thinking that "I've got to put this guy out before he puts me out."

And that concludes the UFC 132 conference call.

Did anything interest you Maniacs?