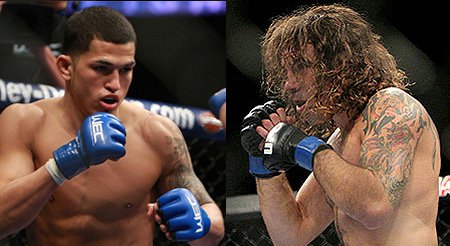 The Ultimate Fighter (TUF) 13 Finale will give fans a free lightweight treat this Saturday night (June 4, 2011) in Las Vegas, Nevada, as two of the top contenders at 155 pounds will duke it out with a potential title shot on the line.

Anthony Pettis is one of MMA's rising stars. After putting on one of 2010's best fights against Ben Henderson which included the "kick heard 'round the world," he was named the "Breakout Star of the Year" by multiple MMA publications.

For Clay Guida, he's finally putting it all together. Originally content with being an incredibly exciting fan-favorite, he's worked tirelessly at Greg Jackson's gym to become a well-rounded fighter that can not only push a hectic pace, but can now finish fights against top-level competition.

"The Carpenter" is ready to nail Pettis in the main event.

Can Pettis "wow" us again in his much anticipated UFC debut? Will Guida derail the "Showtime" hype train? Can this match possibly live up to the "Fight of the Year" expectations that many fans and media are already throwing its way?

Check out the complete fight preview after the jump to find out:

How he got here: Anthony got his start in the Gladiator Fighting Series, going 8-0 on the Wisconsin local circuit with seven of those wins coming by way of first round stoppage. Pettis would earn a trip to the WEC and he would debut with a triangle choke submission over Mike Campbell in June of 2009.

After suffering a split decision setback to Bart Palaszewski in his next fight, "Showtime" would kick into high gear with three consecutive stoppage performances against the likes of Danny Castillo, Shane Roller and Alex Karalexis. His career defining fight would be his title shot against then WEC lightweight champion Ben Henderson in the final World Extreme Cagefighting event ever, WEC 53.

With the WEC title (and a shot at UFC gold) on the line, Pettis and Henderson put on a performance for the ages and you all should know how it ended by now. Final minute of the fight and "Showtime" pulls off the craziest kick in MMA history to score a near fight-ending knockdown that sealed the victory for the youngster.

When Frankie Edgar and Gray Maynard fought to a draw at UFC 125, Pettis refused to sit and wait on the sidelines, instead choosing to take on UFC lightweight contender Clay Guida at the TUF 13 Finale.

How he gets it done: What makes Pettis so fun to watch is his willingness to think outside the box and try crazy new things. It's not just the "Showtime kick" either. Pettis has been willing to throw anything from crazy capoeira kicks to insane cage somersault sweeps from mount. Pettis is an enigma in the cage ... you never know what to expect.

One thing you can count on, though, will be his steady improvement in his defensive wrestling. It's his strength in his takedown defense, ability to get back to his feet or even sweep from a bad position that gives him the confidence to try crazy things.

Look for Pettis to really work his kicking game. Only fellow UFC lightweight John Makdessi rivals "Showtime" in flashy kicks and Anthony has had over six months to work and improve the power and technique in his striking.

If Pettis gets taken down, he's dangerous off his back with submissions, reversals and he can always just pop back to his feet. He will likely try to keep this fight standing and punish Guida and his crazy head movement. Expect anything.

How he got here: Clay Guida is a fan favorite because he's tenacious and he never gets tired. "The Carpenter's" UFC record had dropped to 5-5 after a tough submission loss to perennial contender Kenny Florian and he needed to change.

Guida stepped up his training with Greg Jackson and put a focus on his offensive wrestling, footwork, head movement and submissions. The results have been amazing. The Chicago native has scored three consecutive submissions against impressive foes like Takanori Gomi and Rafael dos Anjos.

In his last bout with Gomi, he perplexed the Japanese slugger with some of the most ridiculous and frenetic head movement of all time, eventually mixing in takedowns to put away "The Fireball Kid" with a guillotine choke.

With the victory, Guida once again entered contender status and earned the right to greet Anthony Pettis in his UFC debut.

How he gets it done: Clay's bread and butter throughout his career has been his wrestling. It's been the backbone of just about every one of his victories and he'll need it to be extremely sharp to get by Pettis.

Clay has what is most likely the best gas tank in the sport, possibly only rivaled by bantamweight champion Dominick Cruz. He will need to tirelessly pressure Pettis and outwork him from bell to bell in each round to wear the WEC champion down.

In the stand-up, Clay will continue his trend of increasingly ridiculous head movement to keep "Showtime" guessing. All it takes is one ill-timed kick or strike attempt and "The Carpenter" will be all up in the Duke Roufus-trained fighter's face with clinch attacks and takedown attempts.

It will be very difficult for Clay to score a finish in this fight as Pettis is incredibly well-rounded and durable so expect more of a positional dominance gameplan from the Greg Jackson fighter. One thing's for certain, though, it won't be boring.

Fight "X-Factor:" The "X-Factor" for this fight is Ben Askren. The Bellator welterweight champion and 2008 wrestling Olympian recently switched over to Duke Roufus' gym to help train his fighters in the art of wrestling.

Anthony Pettis was already putting on a show in defending the takedowns of Shane Roller and Ben Henderson in 2010 and the addition of one of America's finest wrestlers to his camp will only make him even stronger against the top wrestlers in the UFC's lightweight division.

If Pettis has progressed to the point where he can stuff Guida's takedown attempts with ease, this could be an ugly fight for "The Carpenter."

Bottom line: This is absolutely, without a doubt, must-watch television. Clay Guida is going to bring the fight to Pettis and fans are chomping at the bit to see what "Showtime" has up his sleeve this time around. This headlining match-up has all the potential in the world to be one of 2011's most exciting and entertaining fights. Don't blink, make sure you hit the bathroom beforehand because you'll have no one to blame but yourself if you miss out on this one.

Who will come out on top at the Ultimate Finale? Let us know in the comments section below!