As you can see, in terms of sheer volume, Fabricio Werdum got the better of his fight tonight against Alistair Overeem. Yet, two of the three cage side judges awarded "The Reem" the win by scores of 30-27.

Perhaps that's more a function of their perceived hatred for butt-scooting than anything. Far be it from me to speculate too much, though, and I'll simply let the numbers speak for themselves. 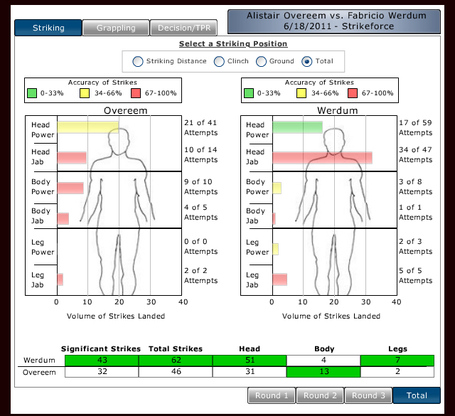 If you watched the fight, you saw "Demolition Man" throw Werdum down multiple times. So why are none of those instances credited as takedowns?

Note: Overeem is not credited with successful takedowns because a takedown requires that the attempting fighter establish a ground-based advantageous position.

There you have it.

For those of you that do not have a Twitter account, there were more than a few MMA media members that scored the bout for Werdum, who looked slightly surprised when the decision was announced in favor of his opponent.

Looking at these numbers, it's hard to blame him.

Anyone feel like the judges botched this one and the wrong man is headed to the semi-finals to take on Antonio Silva? Or was the decision the right one?