Strikeforce: Does Alistair Overeem deserve to be ranked in the top five?

Share All sharing options for: Strikeforce: Does Alistair Overeem deserve to be ranked in the top five? 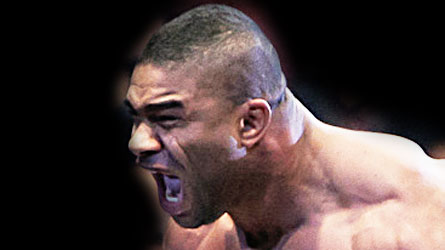 There's a certain space in mixed martial arts that represents stellar fighters with incomparable skills who, for various reasons, can't seem to break into the top of the rankings.

Let's take a look at the current heavyweight pecking order as determined by the USA Today/SB Nation rankings:

What's interesting to note is that Overeem is only ranked number three inside the very promotion in which he is the heavyweight champion of.

Of course, the beautiful thing about these subjective rankings is that they're so fluid. "The Reem's" next fight is against Fabricio Werdum and, if he is to come away victorious, he will then fight Antonio Silva.

That works out rather nicely.

Still, his spot at number seven is up for heavy debate. Yours truly, along with Mania's own Jesse Holland, believe "Demolition Man" is the top dog in all the land.

Thankfully, Ariel Helwani is on the front lines asking questions of the man himself. And how does Overeem feel about his placement in the rankings?

"I understand very well (why I'm not ranked highly). There is an argument that, you could say 'Alistair is not top 10 or not top five because he has not fought this guy and that guy.' But I think where the fans get their motivation is that I did fight a lot, I did have a lot of knockouts or submissions. I am the only fighter to hold a major MMA belt with a major MMA organization as well as the K-1 organization, something that has... nobody has ever done that before so... There's arguments, there's arguments for both ways. But I can understand it that people don't place me in the top five but I also understand why people say, 'Yeah, he's the number one or number two or number three.' But the only way to find out is for those fights to happen and now that Zuffa has bought Strikeforce, it's one step closer and we're going to see it coming in two years. And I'm going to make sure I'm damn ready."

Naturally, the go-to argument in the never-ending debate is mixed martial arts version of "strength of schedule" -- who has he beaten?

If we're not taking into account his K-1 exploits and simply focusing on his MMA career, Overeem hasn't lost since 2007, a span that includes nine wins and one no contest.

The problem arises when considering who he's beating up. A few of the notable names: Todd Duffee, Brett Rogers, Paul Buentello, Mark Hunt, Gary Goodridge, James Thompson... you get the picture.

As of this writing, other than Rogers, not a single one of his wins since '07 has come against a fighter ranked in the top 25.

You can see why some would be hesitant to place him any higher than seven ... other than myself and Nostradumbass, of course.

All that said, his involvement in the Strikeforce heavyweight grand prix tournament, along with the recent Zuffa purchase of the San Jose based organization, ensures he won't be fighting scrubs for quite some time.

Unless he rapidly declines and loses a few fights in a row. Doubtful, I know.

His next bout comes this Saturday, June 18, 2011, in Dallas, Texas against Fabricio Werdum, an old nemesis of his thanks to a May 2006 submission loss.

Not only is he out to avenge that defeat, he's also out to prove his name belongs at the top of the heap, right there with UFC heavyweight king Cain Velasquez.

I think he deserves to be. Do you?