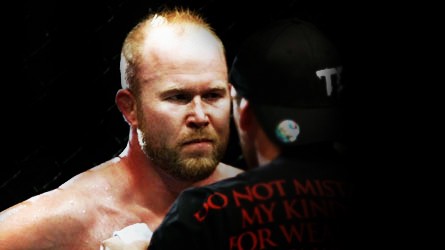 "There are so many guys in this weight class that I'd absolutely love to beat up and that I think I can put on a good show against. A lot of them happen to be ‘Ultimate Fighter' show guys. I don't know if I can maybe get a streak going where I beat up guys from the ‘Ultimate Fighter' show. We'll see what happens and who they throw me next, but certainly C.B. Dollaway would be on the hit list. I always wanted to fight Bisping, but I know obviously he's a little bit higher up the ladder than I am right now. I wanted to take a shot at him when he was at light heavyweight. So now we're back in the same weight class again, and hopefully we'll get a chance to cross paths in the Octagon at some point."

-- While Brendan Schaub is currently making a name for himself as the "legend killer" in the UFC heavyweight division, Tim Boetsch is in the midst of a campaign involving sniping away at Ultimate Fighter (TUF) veterans in the 185-pound weight class. He already took out season three champ Kendall Grove at UFC 130 on May 28 and now he's got his sights set on both C.B. Dollaway and Michael Bisping. "The Barbarian," who found mixed success in the light heavyweight division, recently made the drop down to middleweight, where he says he feels like an overpowering beast and is looking forward to making serious headway in his career. As he tells Sherdog.com, that might as well involve gunning down TUF guys while he's doing so. Unfortunately for Boetsch, both Dollaway and Bisping are booked for dates later this year. Calling all Maniacs. Can anyone find him an opponent that fits the mold?