Share All sharing options for: The biggest flaw in UFC light heavyweight champion Jon Jones' game is his jiu-jitsu 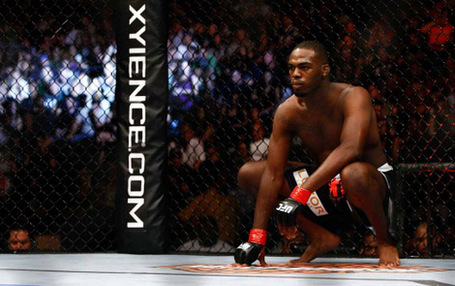 His words, not mine.

This is what he said in a recent interview (via USA Today) when discussing his status in the mixed martial arts world. It's a topic up for debate and the voracious fans of our fair sport aren't shy in their arguments within it.

For some, his rise through the ranks of the light heavyweight division has been nothing short of extraordinary and his ranking should reflect as much.

14 career fights and he's come away victorious in all but one -- and been dominant along the way. Even his one loss was more of a win than anything, as he was disqualified for throwing illegal strikes but was brutalizing his foe beforehand.

His ascension up the 205-pound ladder was capped off with an authoritative performance against Mauricio Rua, in which he decimated one of the greatest fighters to ever live to capture the light heavyweight gold.

But were his cumulative efforts enough to earn him the mythological status of pound-for-pound king?

Jones believes he's still got some holes in his game, and one in particular that's holding him back from claiming that status.

"For a lot of people, they consider me, pound-for-pound, one of the best fighters in the world, which is an honor because (I was) just some snotty-nosed kid a few years ago. But I have a lot of holes in my game. There's a lot of things I need to work on, still, to really live up to that. I think jiu-jitsu is my biggest flaw and that's something I'm attacking every day to become pound-for-pound best."

Of his 13 career wins, just three have come by way of submission. That's not to say winning by way of tap, nap or snap is the definitive measure of a fighter's jiu-jitsu game, of course, but it does provide a bit of insight into the range of the fighter himself.

Another aspect of a martial artist, albeit a vastly underrated one, is his mindset. The very fact that Jones believes he needs to make sure his jiu-jitsu game is as potent as the rest of his ever-evolving skill-set speaks volumes.

The current pound-for-pound king, widely accepted to be Middleweight Champion Anderson Silva, certainly has his deficiencies. Let's just say no one ever accused "The Spider" of lay-n-pray -- for good reason.

That said, if Jones can put it all together, from his striking to his wrestling to his jiu-jitsu all the way down to his mentality, combined with his immense physical talents, and you can forget pound-for-pound.

He just may end up as the greatest of all time.

Let's not get ahead of ourselves; that talk, at least for the moment, is premature. His first defense of the light heavyweight title will come on Sept. 24, 2011, at the Pepsi Center in Denver, Colorado at UFC 135.

And he'll be fighting Quinton Jackson. Not exactly the ideal opponent to shore up ones jiu-jitsu skills.

But the opportunities will come as he continues to mature within the sport. After all, the phenom is just 23-years-old, 24 by the time he steps inside the Octagon opposite "Rampage."

The sky, as they say, truly is the limit.