Share All sharing options for: Strikeforce results and LIVE fight coverage for 'Overeem vs Werdum' on June 18 in Dallas 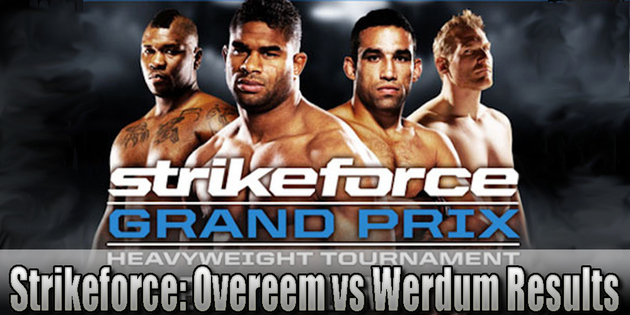 Strikeforce is all set to pull the trigger on its latest event, "Overeem vs. Werdum," TONIGHT (Sat., June 18, 2011) from the American Airlines Center in Dallas, Texas.

Strikeforce: "Overeem vs. Werdum" will feature a rematch of epic proportions, as heavyweight champion Alistair Overeem attempts to avenge a 2006 loss in Pride against "Vai Cavalo" Fabricio Werdum.

Many of our readers check-in before, during and after the Showtime telecast to share their thoughts on the action. Therefore, feel free to leave a comment (or 10) before you leave and chat with all the other Maniacs during the show -- it always turns out to be a great discussion.

Keep in mind that we will also be the spot for the latest news, recaps and post-fight analysis after the show. Without further delay, see below for the latest Strikeforce: "Overeem vs. Werdum" results. (Note: This will go from the bottom up; therefore, scroll toward the bottom for the latest detailed round-by-round action):

Round one: Werdum saunters to the cage in full Brazilian jiu-jitsu garb and Overeem trumps him with a Dallas Mavericks banner draped over his sturdy shoulders. Big head kick attempt from Werdum to get things started and Overeem is stalking him. Werdum closes with a knee and then dives forward with a lunging right hand that Overeem avoids. Overeem sprawls on a Werdum takedown attempt and forces Werdum to stand, walkign away from him. Werdum wants nothing to do with the stand-up early. Inside leg kick from Werdum and Overeem shrugs off another attemp tfrom Fabricio. Overeem is taunting Werdum now. Knee from the clinch briefly from Overeem and Werdum flies forward with a flurry of hooks. Werdum pulls guard and Overeem stands up. Body shot from Overeem and Werdum responds with a knee to the body and he pulls guard again. Overeem gets back to his feet and taunts Werdum. Overeem trips Werdum and walks away from him. Head kick from Werdum and Overeem slams a left hook inter Werdum's head but doesn't follow him down. Overeem slams Werdum and walks away again. Big left and right hand from Overeem and he takes Werdum down but gets back up. Overeem finishes the round in Werdum's guard, not concerned about getting submitted in the last 10 seconds. 10-9 Overeem

Round three: Werdum opens with some knees but Overeem counters with a right hand. Werdum pushes forward and latches onto a leg for a single-leg takedown attempt and he wrestles Werdum to the ground. Werdum turtles and Overeem lets him back to his feet. Another big right hand from Overeem and Werdum pulls guard yet again. After some posturing, Overeem backs out and taunts Werdum. Werdum pushes forward with a combination of punches and a knee and Overeem is loading up for big strikes. Werdum grabs a leg and pulls guard again. Overeem is hanging out in Werdum's guard and talking some smack as the fans chant "stand them up!" Overeem oblges and pushes forward with knees. Werdum lands some left and right hands and drops down for a knee bar as the fight finishes. That was pretty ugly. 10-9 Werdum?

Round one: Barnett quickly cuts off the escape route from Rogers and eats a leg kick. Barnett drops down for a takedown and slams Rogers to the ground with authority. Rogers reached out trying to grab the top of the cage to save himself and thankfully he whiffed or he'd have been deducted a point. Barnett really looking to do some damage from top with submissions in side control. Rogers scrambles into the turtle position and establishes half guard but Barnett passes to mount. Barnett postures up and starts raining down some punches. Rogers tries to push his legs off the fence but can't escape Barnett's position. More ground and pound from Barnett and Rogers escapes the mount but Barnett immediately passes right back and he finishes the round from full mount. 10-9 Barnett

Round two: Rogers opens with a right hand and Barnett responds with a combination. Rogers dives forward and Barnett reverses him directly into mount again. He's got to do something with the position this time, Barnett latches on an arm triangle and he forces the tap just as he passes to side control to complete the submission.

Round one: Both men trade strikes early and Noons takes command of the center of the cage. Body shot from Noons and Masvidal dives forward with a big flying knee that connects. Masvidal dives forward with a takedown attempt and he gets it, forcing Noons onto his back. Noons latches onto a shoulder lock and eventually works his way back to his feet after over a minute on the ground. Another solid knee from Masvidal and Noons is bleeding out of his forehead. Big left hand from Noons and Masvidal circles away. Both men trade straight right hands that connect flush and Noons corners Masvidal but "Gamebred" again circles away and he levels Noons with a big kick right as Noons ducks forwards! Noons is in trouble and Masvidal starts pounding on him! Masvidal is all over Noons and Noons is saved by the bell! 10-8 Masvidal

Round two: Noons again takes command of the center of the cage and lands a leg kick. Noons is bleeding profusely from his forehead but he's pushing forward throwing wildly. Masvidal takes advantage of that wildness and scores a takedown but Noons pops to his feet immediately. Nice hook to the body from Masvidal and he again takes Noons down, this time in the center of the cage and Noons is forced to wrap him up in his full guard. Noons tries to push off and escape but Masvidal recovers. Noons uses the cage to get to his feet and escapes the bad position with two minutes left. Looping right hand connects to the top of Noons' skull and he lands with a big body shot again. Masvidal drops down for a takedown attempt but Noons is defending. Nasvudak briefly takes Noons down but Noons pops back to his feet and now Noons is on top. Noons starts dropping some ground and pound but Masvidal gets to his feet and he lands another thundering knee with 10 seconds left in the round. Noons if forced to run away for until the horn sounds. 10-9 Masvidal

Round three: Noons again takes the center of the cage and throws some big power strikes and Masvidal looks like he might be coasting a bit. Now Masvidal starts to open up but Noons stuffs a takedown attempt from "Gamebred." Noons starting to open up and Masvidal is on his bicycle. Just as Noons is getting comfortable, Masvidal lunges forward and scores a takedown but Noons pops right back up. Masvidal pulls Noons' leg out from under him and smothers the boxer from above. Masvidal grabs a leg and Noons dives down for a desperation kneebar attempt but he can't pull it off as the final horn sounds. 10-9 Masvidal.

Round one: Cormier immediately takes the center of the cage as Monson circles right. Both men clinch and Monson looks strong there with a nice knee to the thigh. Cormier looks content to counter strike and just as I say that he leads with a big right uppercut to the body. Monson initiates a clinch and Cormier takes inside position. Crisp overhand right from Monson and Cormier unleashes a full combination on "The Snowman." Cormier dives in with a 1-2 combination and finishes it with a body kick that connects. Monson is forced to back away under the pressure of some more strikes from Cormier. Monson lands a nice right hand as both men exit the clinch. Cormier punishes Monson with some more strikes and he's looking comfortable there. 10-9 Cormier

Round two: Cormier opens with a wild flurry and a head kick but Monson withstands it and responds. Monson swings wildly and falls to his back but Cormier doesn't indulge him by jumping into his stellar ground game. Both men exchange and Monson dives forward with a clinch attempt but Cormier reverses and Monson lands a nice right hand as they break. Nice left jab from Monson but Cormier clinches n the center of the cage and both men trade big shots. Cormier pushes Monson into the fence and both men posture for a bit. Cormier unleashes a wild flurry after they break but Monson eats it and keeps coming. Big lead right hand for Cormier and he follows it up with a clinch attempt along the fence. Solid knees from Cormier and there's a takedown attempt but it's denied.as the final horn sounds. 10-9 Cormier

Round three: Cormier clinches and takes Monson's back standing but he lets go. Both men crash into each other in the center of the cage and Cormier leaps forward with a big 1-2 that staggers Monson. More bombs from Cormier and Monson wobbles. Monson's in trouble and he's backing away! Monson rolls onto his back but Cormier makes him stand back up. Monson is hurt and Cormier pushes forward with a clinch. Cormier backs away with combinations and whiffs with a huge head kick attempt. Another flurry hurts Monson and "The Snowman" dives down for a desperation takedown but is easily denied. Mauro with his first bad pun of the night saying "the Snowman is melting." One minute left and Cormier just tosses Monson to the ground but lets him up. Right hand by Monson but Cormier counters and lands back to back leg kicks. Big head kick from Cormier and he jukes and jives to the final horn. 10-9 Cormier and he should take away an easy decision here.

Round one: Chad Griggs enters the cage very enthusiastically but Overeem has been there and done that. Both men cautiously circle each other early and Griggs bull-rushes Overeem, pressing "The Python" into the fence and he takes him down with a lateral drop! Very nice takedown by Griggs. Griggs pressuring Overeem on the ground from half guard and he's pounding on him here. Griggs really turning up the heat and pounding away. Valentijn turns away from the strikes and turtles and he's not fighting back and the ref stops the fight. Might have been a little early but Overeem had nothing for Griggs there. Fear the mutton chops! The replay shows that Overeem tapped to strikes.

Final result: Chad Griggs defeats Valentijn Overeem via TKO (strikes) at 2:08 of the first round