UFC Fight Night 25: Jonathan Brookins vs Erik Koch booked for 'Battle on the Bayou' on Sept. 17

Share All sharing options for: UFC Fight Night 25: Jonathan Brookins vs Erik Koch booked for 'Battle on the Bayou' on Sept. 17 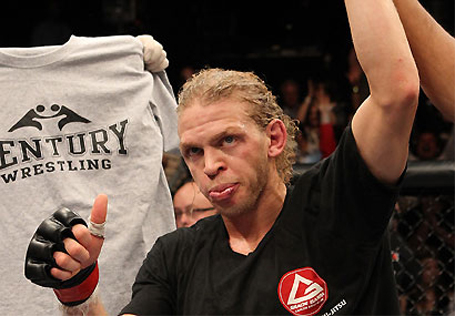 After capturing a "six-figure contract" at the conclusion of The Ultimate Fighter (TUF) 12 back in December 2010, UFC prospect Jonathan Brookins is returning to the Spike TV airwaves. But it won't be at lightweight.

No, "JB" will drop down to the featherweight division for a scrap against feisty fight monger Erik Koch at the upcoming UFC Fight Night 25: "Battle on the Bayou" event in New Orleans on Sept. 17.

The promotion brought word of the pending contest earlier today.

Brookins (12-3) was last seen surviving the offensive stylings of fellow finalist Michael Johnson (and a lawsuit from Bellator CEO Bjorn Rebney) to capture the TUF crown on season 12 of the popular reality series.

He's currently enjoying a four-fight winning streak and hasn't tasted defeat since being crushed by Brazilian butt-kicker Jose Aldo way back at WEC 36 in late 2008.

Smart move to head back to 145-pounds before even testing the lightweight waters?

Koch is just 22 years old and already sports an impressive record of 11-1 in his budding professional career. "The New Breed" is fresh off two straight destructive knockouts, against Francisco Rivera and Raphael Assuncao, respectively, both of which earned him "Knockout of the Night" honors.

The Iowa native trains with Roufusport. That's the Duke Roufus led team that is quickly becoming famous in the world of MMA with such stars as Pat Barry and Anthony Pettis.

Koch brings the same level of excitement as his stable mates and this match-up has fireworks written all over it.

UFC Fight Night 25, a Bud Light sponsored event known as "Battle on the Bayou," is set to go down on Sept. 17 in New Orleans, Louisiana.

So far, Court McGee vs. Dongi Yang and Alan Belcher vs. Jason MacDonald are the only bouts taking place on the card.

As usual, keep it locked right here at MMAmania.com for more on this still-developing fight card.