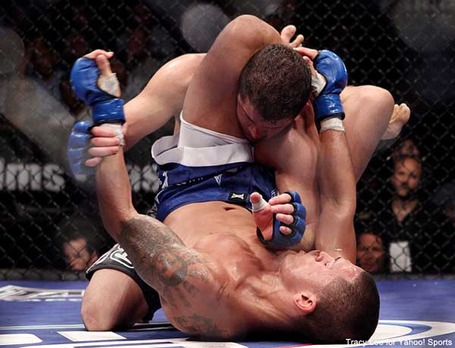 When a fighter displays striking abilities in such a unique fashion as Anthony Pettis, it's often easy to overlook his ground game in favor of the "Showtime" kick or the vast array of Capoeira strikes he holds in his arsenal.

Make no mistake: Pettis is a complete fighter.

This Saturday (June 4, 2011) the former WEC lightweight champion will receive his introduction to the big stage of mixed martial arts when he headlines The Ultimate Fighter (TUF) 13 Finale. His opponent is Brazilian jiu-jitsu kryptonite Clay Guida, who has made a career of stifling the grappling of his opponents.

But for "The Carpenter," his grinding style may come to an abrupt halt when he clashes against an opponent well rounded in all disciplines like "Showtime." In fact, Guida’s grinding style may just play hand-in-hand into one of Pettis’ most dangerous skills, the triangle choke, which he has secured in three of his last five victories.

Follow me after the jump for a triangle breakdown and one of the defining moments in Pettis’ young career:

The triangle choke was made famous by jiu-jitsu pioneer Royce Gracie in the early days of the UFC when he choked out Dan Severn. It is traditionally set up from within the guard when you will want to trap an arm between the legs, while extending the leg of the side of the trapped arm up and across your opponent’s neck. It will slide all the way across and hang on the opposite side of the neck and shoulders of your opponent.

From there you take that other leg and go up and over the ankle, locking around that leg. The locked legs will formulate what appears to be a triangle and the choke comes from the pressure of the legs, as well as the position of the un-trapped arm.

To get a little more perspective on the set up of the choke I employed the help of MMAmania’s own A.K., who has executed this hold in a mixed martial arts fight.

The triangle choke is probably my absolute favorite submission. It was the first submission I ever tapped someone out with while rolling, and it was the submission method I used to earn my first win in MMA. The triangle is also very versatile, as it can be used as a set up or a transition for other submissions.  I have two set ups that I like to use most when aiming to submit my opponent with a triangle choke.

The first one is very basic, but can be considered high-risk in MMA since it involves giving up dominant position. While in full mount, I will move up to a high mount position, taking away my opponents ability to use his hips for a sweep, or to shrimp back to guard.

Here, I will put one hand behind my opponents head and pull towards myself, getting him to lift his arms and try to push away to create space. From there, I grab say my opponents right wrist and quickly stuff it underneath my right leg. From here you’ve got to be quick. It is possible for my opponent to spin and go out the back door right here, so before he does that, I keep my control of his head, pull him in to me and roll to my back while simultaneously moving my left leg along my opponents right side, under his right arm, and locking my right foot under my left knee.

The triangle is locked in.

Once on my back with the submission locked in (remember, my right foot is locked under my left knee) I will reach my right hand down and hook my opponents left leg, and pull. This not only breaks down my opponent and keeps him from stacking/Rampage slamming me, but by hooking that leg it naturally turns my body parallel with my opponent, which tightens up the choke.

This sort of set up strays from the traditional usage of the choke, but it is effective nonetheless. Several fighters actually end up in this position because when mounted all they think about is getting their opponents off of them. In doing so, often times they will push off the body of the fighter in mount, which leaves openings for arm bars and as mentioned above, a triangle.

In a fray or scramble, the fighter on bottom will leave plenty of opportunity, as well as their own momentum, for the mounted fighter to lock in a submission. You do have to be very quick though because if your opponent escapes, he is now sitting in your guard -- or worse -- he passes into side control.

Another set up from A.K.:

The second one is a little more flashy, and slightly less practical in an MMA but still very practical (in my opinion in jiu-jitsu tourneys).

While facing my opponent in the butt scoot position, I will have my left foot flat on the floor in front of me, with my knee vertical, and my right foot kind of relaxed out in front of me with my knee parallel to the mat. I will gain wrist control with my left hand (my opponents right wrist), and make sure that my left knee is inside of my of my opponents right hand. Think along the lines of keeping your right foot to the outside of a southpaw’s lead foot in boxing.

I will then use my wrist control to pull my opponent toward me and extend his right arm away from his body. I will use my left foot to hop up a little bit, shoot my left leg over my opponents right arm and hook my leg over their shoulder, close to their neck, while simultaneously hooking my right leg around my opponents side and sliding it up underneath his arm to lock in the triangle.

It is basically a flying triangle, but from the butt scoot position instead of standing. No one suspects you to triangle them as you are sitting on your haunches in front of them.

While being very flashy, often times the chokes and submissions in general are the most effective when nobody suspects them. Pablo Garza and Chan Sung Jung just recently executed submissions that neither opponent ever suspected and were submitting before they knew it.

Having a unique set up to the choke makes it harder for the opponent to defend since you tend not to drill for that in training and your reflexes won’t operate as quickly when the situation occurs. I recently had this impact me completely when we began training for an opponent of a teammate who has a highly unique arsenal of movements and set ups.

But when this weekend hits, Anthony Pettis will showcase a dynamic striking arsenal with a deadly technical ground game. He owns one of the more dynamic and active guards in MMA today and will look for a way to escape and defeat Guida’s overwhelming and suffocating top game.

His triangle choke is very dangerous -- Shane Roller found out exactly how dangerous when they met in their extremely exciting WEC bout. A classic set up and textbook execution took over with less than a minute left in the third and final round.

(Before we start with the .gifs, let me first give a thank you to Zombie Prophet for the .gifs. Check out his site (Ironforgesiron.com) -- he has .gifs and videos of fights up faster than anyone else on the net.)

Roller, who is gassed (along with Pettis, actually) in the third round, knows he needs a finish to win because he was most likely down two rounds to none. Desperate, he throws a massive overhand into the guard of Pettis.

Pettis keeps his legs active and traps the punching arm between his legs, and, as the punch hurls toward him, Pettis stays moving, avoiding the punch with a subtle shoulder tuck. He immediately uses his left leg to trap the body of Roller as he sets up the triangle.

Pettis grabs the left ankle and pulls down his leg further from a high guard into the triangle position. He then wraps the right leg up and over the left leg, locking in the choke. He immediately pulls down on the head to increase pressure on the choke and shifts his body toward his left side.

In doing so, he takes Roller's balance away from him, as well as his capability to stack or pick up Pettis. He also looks for the leg to sweep under, too, demonstrating classic, traditional and text book perfect execution.

Alex Karalexis met a similar fate when he faced Pettis. While on top of Pettis, Karalexis makes the critical mistake of leaving his hands on the mat and being lazy inside the guard.

Keeping his hips active swiveling, Pettis never stays grounded or isolated in one area off his back. He plays a patient chess game with Karalexis until the right arm of Karalexis is wrist controlled comfortably enough to manipulate to allow the left leg to come up and over.

From there, again, Pettis uses his hand to bring down his leg from high guard into the triangle and hooks under the right leg of Karalexis to sweep his balance from under him, putting him on his side with no leverage or way to escape. Pettis lands some punches to an exposed and vulnerable head, further increasing the likely success of the hold until he earns the tap out.

Have at it, Maniacs! What do you think of the ground game of both Pettis and our very own A.K.?