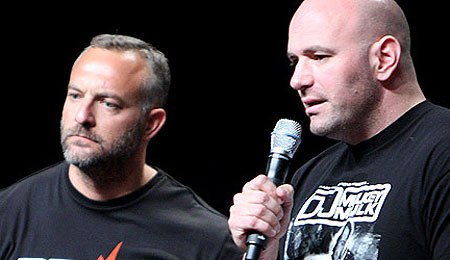 As was reported earlier today, Zuffa LLC announced that it will begin to provide customized accident insurance coverage for all 350 UFC and Strikeforce fighters on its roster.

The new policy, underwritten by the Houston Casualty Insurance Company, is an unprecedented move in combat sports history.

UFC executives Lorenzo Fertitta and Dana White were made available today in a media conference call to discuss the finer details of -- and genesis for -- the groundbreaking deal. In addition, the dynamic duo discussed the recent changes to the UFC 130 card with Frankie Edgar and Gray Maynard both dropping because of injuries.

Check out all the highlights and juicy new details after the jump:

So what are your thoughts, Maniacs -- How important is this day in MMA history?