Share All sharing options for: Bellator 43 results and recap for 'Hieron vs Hawn' on May 7 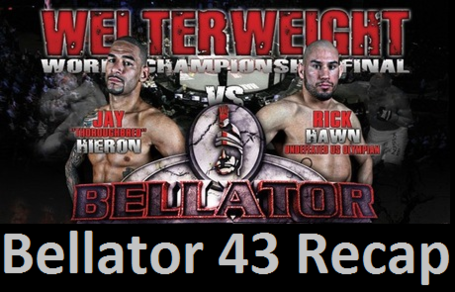 Bellator 43, which aired live from the First Council in Newkirk, Oklahoma last night (May 7, 2011), is officially in the books. The event started off great but again, in typical Bellator fashion, ended in a controversial decision.

The main event of the evening was the welterweight tournament finals between Jay Hieron and Rick Hawn. While both men were known for their different grappling techniques, this bout turned into a kickboxing match.

Hieron was able to outmaneuver Hawn early, circling away from his aggression and countering nicely but in the second round, Hawn began landing his punches in combination and even stunned "The Thoroughbred" on a couple of occasions.

The story of the fight was Rick Hawn's constant forward aggression mixed with decent punches and Jay Hieron's counters and strong kicks. By the end of the third round, Hieron had a slight cut under his eye and he'd taken more than he'd doled out but the judges awarded him a split decision anyways.

Granted, it was a close fight but MMAmania and Bloody Elbow both scored the fight for Hieron while the Sherdog consensus was a draw.

Hieron was unable to win a fight in the Bellator season four welterweight tournament without controversy. His first round fight with Anthony Lapsley was mistakenly ruled a technical submission despite Lapsley being fully conscious and many felt the Xtreme Couture product lost both his semifinal and final tournament bouts.

He'll have his hands full with Bellator welterweight champion Ben Askren in a title bout later this year.

The rest of the card, however, ended with plenty of exciting finishes.

The middleweight special attraction between Bryan Baker and Joe Riggs ended with a very exciting technical knockout. Both men were slow to engage early, with Baker getting the better of the striking.

Both men really began to open up about the midway point of the second round and Baker decked "Diesel" with a massive left hook. The fight was stopped before Baker could follow up on the turtled veteran.

After his victory, Baker proposed to his girlfriend ... and she said yes.

Actually, this has been an incredible year for "The Beast." First, his cancer goes into remission and now he's defeated his second consecutive big time MMA veteran.

Baker will be more than a welcome addition to the next Bellator middleweight tournament.

Also on the main card, former WEC bantamweight champion Chase Beebe withstood an early attack from Jose Vega to submit the Bellator season three bantamweight semifinalist with a guillotine choke just over four minutes into the first round.

It took him three attempts but if at first you don't succeed and all that.

Beebe had dropped five fights in a row at one point, losing his WEC title in the process, but he appears to be back on track. The Chicago wrestler has now won six of seven fights and with his win tonight, earned an invite to the Bellator season five bantamweight tournament.

Ron Sparks set the pace for the evening in the opening bout of the main card, dropping Vince Lucero with a nasty leg kick. Sparks smelled blood and swarmed the veteran, forcing Lucero to tap out with a keylock just over two minutes into the first round to earn his first career victory by way of submission

Bellator will be very happy to have Sparks in the next heavyweight tournament whenever it gets around to holding one. "The Monster" is a ferocious finisher and could definitely liven up the stale division..

For complete Bellator 43 results and detailed round-by-round commentary of all the televised fights click here.