Saturday Night's Mania Event is back, despite heavy competition from both Bellator 43 and the mega-fight between Manny Pacquiao and Shane Mosley.

That's alright, though, because we've got business to take care of.

In the wake of one of the most successful events in the history of the UFC, there are questions that need asking in regards to the main event that marred the entire show.

Was Jake Shields intentionally trying to poke Georges St. Pierre in the eye at UFC 129 this past Saturday, April 30, 2011, in Toronto, Ontario, Canada?

To start, it should be immediately established that an eye poke did, in fact, occur and it was the main culprit in causing GSP to lose vision in his left eye for most of the duration of the fight.

It was not a punch to the eye, as Shields initially commented at the post-fight press conference. It was a vicious poke, or maybe even scrape is a better term.

There are many layers to this occurrence that need to be discussed. Should the fight have been allowed to continue after the infraction, in which St. Pierre's sight was clearly compromised to the point of dangerousness?

Does someone need to tell Greg Jackson, trainer to the stars, that it's simply irresponsible for him to outright dismiss this fact when his fighter made him aware of it between rounds?

Did the ringside doctors and the entire commission drop the ball in regards to this entire incident?

Lots to talk about, ladies and sirs, let's get right to it.

Let's start with the fact that St. Pierre was, without a shadow of a doubt, poked in the eye by Shields and suffered an injury, which turned out to be a build-up of blood in his eye that obstructed his vision and required treatment of which is still ongoing as of this writing.

"Rush's" trainer, Firas Zahabi, who was cornering him on fight night, detailed the exact point in which he witnessed the poke:

"Luckily it was just blood in the eye and not the detached retina. This occurred after the swipe to the face. When he threw that open handed hook, that was recorded, I complained to the ref immediately. I saw it, I completely saw it. I complained about it immediately to the referee that it was an open hand swipe to the face. I don't think it was intentional, but I mean it still happened, and he should get a warning and it should be kept in mind that he's punching with an open hand. It's not right, it's very dangerous."

Shields was NOT warned and the poke went unnoticed by everyone until later replays showed exactly what happened. In fact, even ringside commentators Mike Goldberg and Joe Rogan, who had access to countless replays, were not aware of the poke. They initially thought the same as Shields and blamed a punch.

What happened next was one of the most reckless and irresponsible exchanges you will ever hear inside the Octagon.

Here is the conversation that occurred between St. Pierre and Greg Jackson after the former went to his corner following the second round.

Reading that again is almost sickening.

Here is this world-renowned trainer, who is supposed to have his fighters best interests at heart, and he's literally telling him it's no big deal that he can't see out of one of his eyes.

The lack of outrage, or even the calls for some sort of explanation for this, is dumbfounding.

What should have taken place, was a doctor needed to come inside the Octagon and give a thorough examination of GSP to make sure he was fit to continue fighting. And if he was being truly forthcoming in that he had almost no vision in one of his eyes, then the fight should have been stopped.

And we would have a new welterweight champion.

That's because the title would have changed hands due to doctor stoppage, despite the fact the damage was caused by an illegal infraction on the part of the challenger.

Had Shields been called for a foul, the way he should have been, and the doctors would have deemed St. Pierre unfit to continue, as they should have, the belt would not have changed hands.

Yet, no one is being held responsible for these grievous oversights.

And now on we go to the big one and one that has recently been given quite a bit of play on message boards and forums all over the Internet.

Was Jake Shields intentionally trying to poke Georges St. Pierre in the eyes?

First of all, Shields head trainer, Cesar Gracie, told us at MMAmania.com that he brought in a new boxing coach for Jake and his stand-up game was on point in the fight:

"He hurt St. Pierre, broke his nose, popped his eye and I was really surprised how well he did standing with the guy. I got a new boxing coach, this guy named Mario (L'Esperance) and the guy really tuned up Jake's game. He was throwing a great jab. He landed the right hand a couple times really hard. I really think he caught GSP off track to see how good Jake's come along in the stand-up department."

This seemed to be supported in some ways, if for no other reason then the fact that Shields, widely regarded as a sitting duck on his feet, was not completely blown out by the champion.

Why exactly is that? Could it be that from the second round onward, the French-Canadian was handicapped?

On the surface, this all seems well and good. Except a deeper look, with some extremely incriminating photos and .gifs, reveal that Shields may have known exactly what he was doing with those open-fingered four-ounce gloves.

Let's look at a photo by Tracy Lee of Yahoo! Sports: 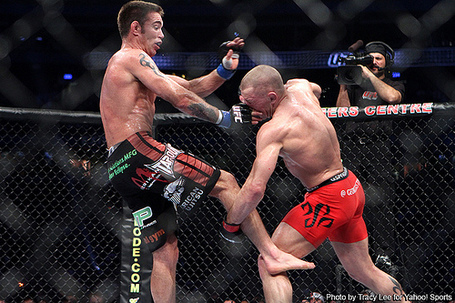 I'm not exactly a boxing aficionado but that doesn't look like a proper defensive technique, nor an effective offensive weapon ... unless the point is to gauge your opponents eyes out, shades of Hollywood Hulk Hogan in his nWo days.

This picture actually isn't that bad, considering it's often nothing more than instinct in the cage and reactions vary based on impending dangers.

Let's look at another photo. 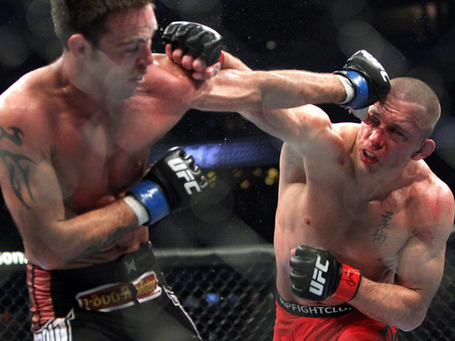 Now that is a pretty blatant thumb in the eye. Again, you could say he's simply acting on instinct and this was not intentional, but if you're throwing your arms out to block against the overhand right GSP is throwing, what's the point of sticking your thumb out in that manner?

How about a few .gifs to illustrate what looks to be pretty shady striking on the part of Jake.

Remember, Shields came into this fight with greatly improved stand-up thanks to a new boxing coach.

I didn't realize a wide arcing, open-handed scrape across the face was effective boxing technique. And again, I fail to see the effectiveness of such a strike, even if it lands perfectly.

What's this? An effective counter jab? A straight left? But again, the fingers are open and out and this time it looks like a blatant attempt on the part of Shields at pushing his fingers directly into St. Pierre's face.

One last .gif to illustrate.

Where is this improved boxing?

That's actually become a crux in the argument against any nefarious activities on the part of Shields. There are a select few that have taken the stance that his stand-up game is so horrifically bad, that he simply did this because he doesn't know any better and that's his natural reaction to the situation at hand.

To which I call bullshit.

Cesar Gracie brings in a coach specifically to advance Shields stand-up skills and this is the result?

It's a slippery slope any time you call into question whether or not a fighter is playing by the rules. In this instance, it's not unreasonable to think there are more than a few of you who will come away from this with the idea that Jake Shields is a dirty fighter.

I'm not endorsing that message, nor is it what I seek to convey.

However, I do think it's necessary to look into this occurrence, if, for nothing else, future fights that have so much on the line. It is absolutely unacceptable that Shields is throwing open-handed strikes in that manner, especially in the fifth round of the fight when St. Pierre's eye was unquestionably at its worst.

It's also utterly and completely unsatisfactory that GSP was allowed to return to his corner and have his coaches simply dismiss his injury as irrelevant.

While I can appreciate why that method of psychology was employed, with victory in mind and nothing else, that's precisely the problem. Winning should not represent the be all, end all in this, or any, sport.

Safety matters ... or at least it should.

Yes, it's admirable that St. Pierre showed the heart of a champion in battling through such a debilitating injury. However, it's equally stupid and just as appalling that he was allowed that opportunity in the first place.

Let's hope some changes are made so the health and well being of the fighters that drive this wonderful sport are always kept in mind above all else.

I attempted to contact Jake Shields and his management to obtain a response to the allegations that he was purposely trying to poke St. Pierre in the eye and received no response.

Props go out to the Underground for the .gifs.