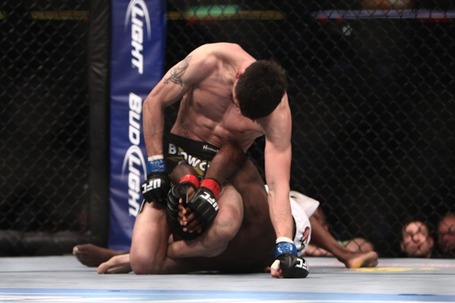 When a sports fanatic begins to introduce potential fans into the sport he or she loves, that person generally begins by highlighting exciting fights and jaw-dropping moments.

The new fan then becomes interested in moments of that nature and starts paying attention in closer detail. That tends to be a common way of gaining new fans to any given sport.

In football, it's the one-handed catches and the nasty hits on the quarterback. In basketball, it's the alley-oops and gravity defying breakaway dunks.

UFC 129: "St. Pierre vs. Shields" was a fun event. It had knockouts, submissions, retirements, back-and-forth battles and two titles on the line. The event was fun for pretty much any type of fan.

If you're a grappling fan, then you were especially delighted to be treated to a highlight-reel submission, which I'll break down in greater detail after the jump.

Pablo Garza has burst onto the scene very rapidly after losing his WEC debut against Zhang Tie Quan. He secured a 51-second knockout victory with a highlight real flying knee over Fredson Paixao in his UFC debut in December of 2010.

With a knockout that many MMA fans have watched over and over, it was his submission on April 30 in Toronto that has the MMA world chirping.

From MMAmania.com's play by play:

Round one: The Facebook stream finally starts and we're already halfway through the opening round. Big shot from Jabouin knocks the mouthpiece out of Garza's mouth. These two are banging it out a bit. Plenty of kicks and Jabouin is landing big with those legs. Garza gets aggressive and holy shit he throws on a flying triangle. He's almost got it in and he rolls him over. Yves hanging tight but Garza is on top now and grabs an arm to go with it. He's pulling on the back of the head and that does it. Hell of a triangle and way to stay with it.

Ladies and gentleman, the flying triangle.

There was plenty of clinch work in the set up, as you will see Garza has a very solid clinch on the back of Jabouin's head and neck. He throws a punch that misses and immediately wraps up the clinch again by throwing such a strike even if it does not land, it keeps you ahead of your opponent in terms of dictating the pace.

Remember MMA is much like a chess match and just because you feel good about this move, your opponent may win in the next three moves.

Garza has a very significant height advantage which makes the clinch work much more effective. He also (aside from the strike thrown over the top) throws a knee to the body, forcing Jabouin to have a lower guard to defend himself, leaving the neck and above area prime for attacking.

After the initial knee, he switches and throws the opposite knee to the midsection. Jabouin anticipates the third knee to the body and sets up the flying attack for Garza.

Jabouin also has a hand on Garza's neck. That is important because technically that arm is isolated for Garza to attack. It is not necessarily an error on Jabouin's part because let's be honest, not many people go for flying submissions in MMA.

If Jabouin has both hands low defending the knees or both hands wrapped around the neck, this submission would not be possible.

So from there, instead of throwing another strike, he sends his left leg skyward and plants that leg on the shoulder of Jabouin. They hit the mat instantly and Garza begins to go to work. Garza grabs his ankle and tightens the choke properly. He also immediately cuts the angle by grabbing an underhook beneath the right leg.

By doing so, he prevents Jabouin from posturing and stacking to escape the submission.

From the clip we see Garza delivering elbows to the head of Jabouin. Now he's trapped the leg, preventing balance and is throwing nice powerful elbows to keep Jabouin from getting comfortable and gaining composure.

Remaining busy is very important for most if not all submission set-ups.

Garza finishes the choke when he pulls down the head of Jabouin and torques his hips outwards. Here is another look at the aerial attack and finish.