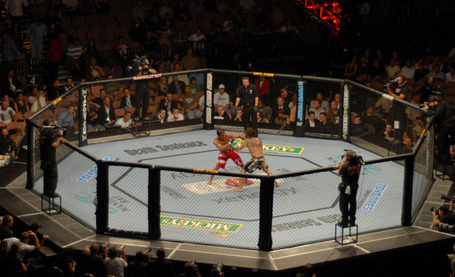 FanPost edited and promoted by MMAmania.com.

The UFC Octagon is a staple of combat sports

Mixed martial arts (MMA) has seen many variations of the famed cage along with use of the boxing ring format. Each promotion tries to fine-tune their playing field to express the brutality and ruthless confines of the cage.

The Octagon is the most famous to the point that it has become a trademarked brand.

The now famous cage would've looked a whole lot different if not for some reasonable-minded people and not the SEG brain trust for creativity.

Let's take a closer look at the evolution of MMA playing fields.

In 1993, Semaphore Entertainment Group (SEG) was an entertainment conglomerate dying for fresh and new content. With the ever increasing popularity of "Faces of Death" an idea came across SEG's desk.

"War of the World's" was the name and it was a new brand of combat sports.

The concept was one that many people in the martial arts community debated, supremacy of their art. It was karate vs. Taekwondo, boxing vs. kickboxing and a relative unknown was wanting to challenge them all, Brazilian jui-jitsu (BJJ).

The name of this new hybrid league was changed to the Ultimate Fighting Championship (UFC). The concept of the show was in the place and the UFC needed a playing field that gave the illusion that this was the ultimate proving ground.

SEG and the Gracie family butted heads for weeks and months about which model should be used to showcase the fighters without looking corny and cheesy.

And this is where it got very interesting.

The brass at SEG pushed the idea of a Gladiator-type stage with pillars and arena-style seating. This stage was to pay homage to the fallen gladiators of the past while giving them a grander feel.

The idea was shot down by the Gracies as being outdated and far too predictable for them.

The next idea was by far the most ludicrous

SEG proposed a moat infested with blood thirsty piranha's swimming within it. The story is the Gracie family stormed out of the room when this was suggested because they were so disgusted with the idea. SEG eventually withdrew the proposal and started working on creations a little closer to reality than fantasy. 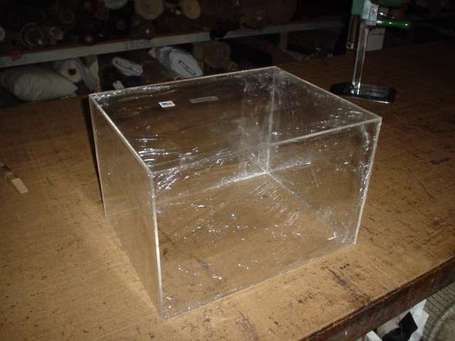 The next concept was a plexiglass surrounded canvas enclosing the fighters. The idea faced issues of ventalation and heat created by the fighters exhausting energy. The sturdiness of the plexiglass was also called into question also visibility due to perspiration building up.

The other issue was a fear the plexiglass walls would be used to abuse someones competition.

The concept of the Ocatgon finally came to fruition because the Gracies and SEG wanted an arena which looked like a street fight domain. 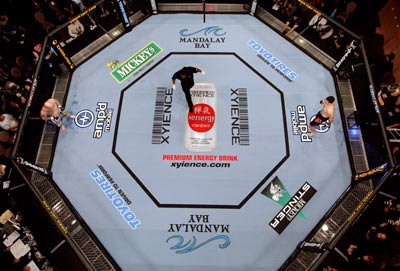 The UFC cage is an octagonal structure with walls of metal chain-link fence coated with black vinyl and a diameter of 32 ft (9.8 m), allowing 30 ft (9.1 m) of space from point-to-point. The fence is 5'6" to 5'8"  high. The cage sits atop a platform, raising it 4 ft (1.2 m) from the ground. It has foam padding around the top of the fence and between each of the eight sections. It also has two entry-exit gates opposite each other.

The cage offers the street fight appeal and would be viable for the attending fans. The cage also offered a home paying audience a chance to see much better than previous concepts.

The UFC has never looked back and has made the Ocatgon one of its pinnacle standards throughout time.

Will the UFC ever evolve from the Ocatgon?

Let's see some other implementations of the ring and cage format used by other promotions.

Promotions like World Extreme Cagefighting (WEC), King of the Cage (KOTC) and Strikeforce are using this concept because the UFC has trademarked the Ocatgon format.

Fighters don't seem to mind the circular cage but do admit that striking angles change slightly. They also note takedowns are easier because fighters can't find wedges like they can in the corners of the octagon. 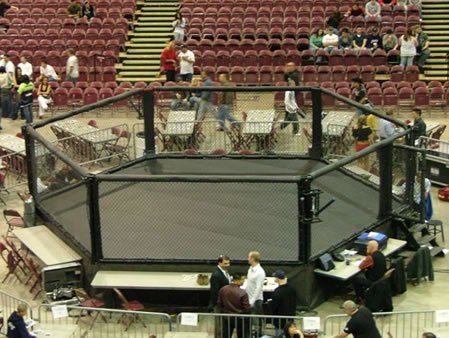 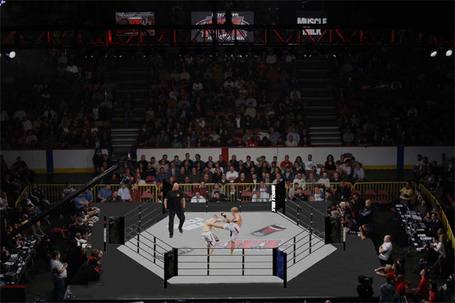 In the battle of shapes and sizes the next "crazy" concept was the use of hexagon over the "less cool" Ocatgon. Promotions like the International Fight League (IFL)  and DREAM are the most notable users.

The DREAM hex is the most notable as its chain-link caging is the color white. The Japanese tend to do everything slightly different for pure aesthetic purposes. The cage has received praise for its uniqueness and appeal from fighters. 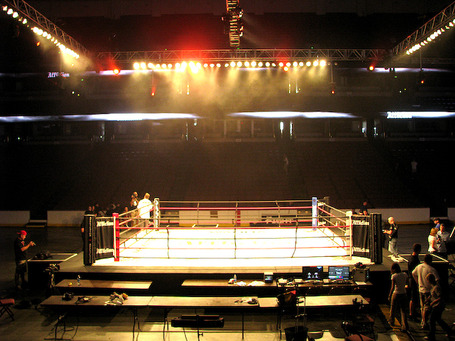 The ring was used by Pride Fighting Championship (Pride FC) and Affliction MMA most notably.

The ring offers a whole slew of different variables that a cage concept cannot offer. When in the clinch against the ropes the fighter defending can use a "rope a' dope" to gain leverage to escape the clinch easier. During a double-leg takedown the defending fighter can use his butt to press in between the middle and top rope.

The use is illegal to abuse but has been seen used effectively.

The major difference can be seen when fighters from Pride FC couldn't transfer their skills over to the Octagon. The angles within a boxing ring are hugely different as you're fighting within a square, the ropes bend more and the corners are harder to elude.

So Maniacs, let's say your a promoter, what design would you use or create and why?