Ultimate Fighting Championship (UFC) is all set to hold yet another Memorial Day weekend event with tomorrow night's (May 28, 2011) "Rampage vs. Hamill" fight card live on pay-per-view.

The world's largest fight promotion is in the middle of attempting to make it a tradition to hold a show each year around this time and really, who can blame them?

What better way to honor the men and women who have sacrificed for this country than by letting them watch a couple of highly trained martial artists climb in a cage and duke it out?

None that I can see.

With the upcoming UFC 130 event and being in the holiday spirit, we at MMAmania.com got to thinking: what were some of the best memories of past Memorial Day weekend events?

In combing through each show hosted by UFC during the last weekend in May, we found four numbered events with one common theme so glaring among them.

With that in mind, myself, as well as resident Mania feature writer Sergio Hernandez, decided to commemorate these four events with our memories of the show. Serg took the reins for UFC 13 and UFC 71 while I tackled UFC 60 and UFC 114. 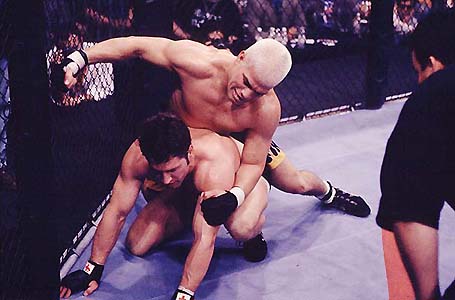 Before Brock Lesnar, there was Ludvig Borga.

Okay, not exactly but former pro wrestling turned pro boxer turned MMA failure Tony Halme fought Randy Couture -- also his debut -- at this event. It took "The Natural" all of a minute to choke him out en route to winning the heavyweight tournament. He would go on to do pretty well for himself in the sport.

Guess who else made their UFC debut at this event?

Seriously, this event is chock full of history. "The Huntington Beach Bad Boy" debuted as an alternate in the lightweight tournament (there were only two divisions back then -- if you weighed less than 200 pounds, you were a lightweight; over 200 and you're a heavyweight) and got the chance to fight for the whole sack of apples when Enson Inoue dropped out due to injury.

He fought none other Guy Mezger and was actually sticking it to him until a weird stoppage either due to a supposed tap or a cut brings a halt to the action. Mezger may have tapped, that much is sure. When the action restarts, the more experienced Lion's Den fighter gets the upper hand and wins the tournament.

Because of that fight stoppage controversy though, a rematch was set up later. And when Ortiz won that one, he talked all sorts of trash which led to a very angry Ken Shamrock doing the most intense finger wagging I have ever seen.

Yep, the Ortiz/Shamrock rivalry started at this event too.

On top of that, you've got Vitor Belfort and Tank Abbott, two guys who have never seen a face they didn't want to punch, going at it.

Abbott was a guy who you had to fight for at least 15 minutes to beat. Oleg Taktarov, Dan Severn, and Scott Ferrozzo all learned this the hard way. Yeah, Don Frye beat him in two minutes but I'm pretty sure his mustache is a weird sort of natural steroid that is only found on Don Frye's upper lip.

When Abbott wasn't forcing dudes to fight non-stop to beat him, he was knocking suckers out and putting the UFC on the map. Aside from Royce Gracie, there's no one that did more for the early UFC than Abbott and his opponent-hating fists.

Vitor Belfort on the other hand was an 18-year old kid from Brazil who fought like his country's GDP depended on it. His first three fights combine for a minute and 12 seconds.

What? That's stupid strength, right there. So it just made sense to put these two guys in the cage together.

And when they did, Belfort made quick work of Tank forcing a stoppage in less than a minute.

And you wondered why they called him "The Phenom." 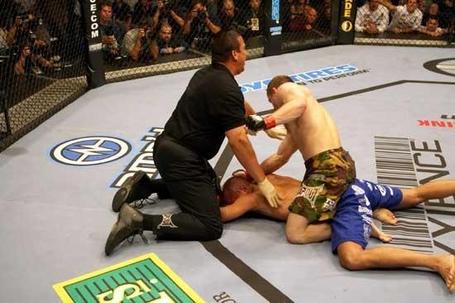 History is fascinating on many levels, both in its complexity of depth and its total impact on a future it will not see. This is especially appropriate in sports, where the old guard must always give way to the new kids on the block.

It's usually a seamless transition, one that flows so smoothly over time it seems to spring upon us one day when we step back and realize the massive changes that have occurred, that we didn't even notice, right before us.

However, there are times in which the past comes back to the future, as it were. How many times have you wondered what it would be like if Jim Brown played running back in today's NFL? Would he even make it past the line of scrimmage?

Imagine if that question could be answered -- definitely. That's what the mixed martial arts world was treated to over the Memorial Day weekend in 2006. The original Octagon gangster, Royce Gracie, made his return to the cage to take on the man known as the greatest welterweight champion of all time, Matt Hughes.

I wish I could say that I was jazzed for the event, as it occurred. Unfortunately, I can't. At the time, I had yet to discover MMA. Judge me if you'd like, but to that point in my life, I had yet to be exposed to a mixed martial arts fight.

By then, though, people like me were becoming fewer and fewer. The Ultimate Fighter (TUF) had debuted the year prior and the boon period was underway. More and more folks were tuning in and becoming fans at the amazing spectacle they were witnessing.

In fact, the "Hughes vs. Gracie" event shattered the record for pay-per-view buys up to that point, with 620,000 separate homes purchasing the show, according to MMAPayout.

They were treated to a quick -- and brutal -- fight; a veritable passing of the torch, if you will.

Royce terrorized his early opponents back in the 90s with his brand of Brazilian jiu-jitsu (BJJ) that befuddled each and every foe that climbed inside the cage with him.

However, by 2006, BJJ was required practice for any martial artist hoping to make it to the big time and Hughes was well versed in the ways of the Gracie family. He also had something his counterpart did not: good old American wrestling ... and strength.

Hughes simply overpowered Gracie, nearly tearing his arm off before back mounting him, flattening him out and devastating him with an overload of punches that gave us an answer to the question of how would the old school do against the new. 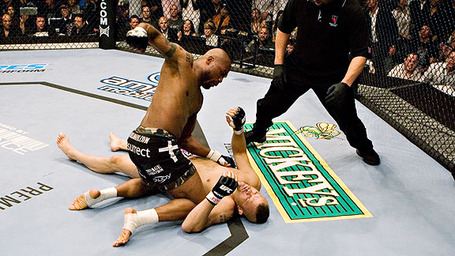 I've never seen so many butthurt white guys at once.

Liddell was the defending and dominant UFC light heavyweight champion going into UFC 71: "Liddell vs. Rampage." He won the title from Randy Couture, beat Tito Ortiz, Jeremy Horn, Renato Sobral and Couture again for good measure during his reign at the top.

Not only that but he was knocking these guys out left and right, like it was going out of style. He was simply the biggest and baddest dude on the planet at this time. Everybody loved the guy. Especially the beer swilling "Just Bleed"-types. Honestly, Chuck drank like them, had subpar tattoo work like them, and didn't mess around on the ground.

He was the "Everyman."

Quinton Jackson had been fighting in Japan for Pride FC the entire time, playing second fiddle to Wanderlei Silva, Mauricio "Shogun" Rua, and the Chute Boxe Academy. Even though he fought Liddell back in 2003 and earned the technical knockout (TKO) win, his brutal losses -- coupled with "The Iceman's" meteoric rise -- made that loss seem like ancient history by the time they locked horns again four years later.

I was at my friend's apartment and aside from myself and the two friends I came with, it didn't seem like anyone else there really followed the sport all that much. That was also one of the first instances that I realized the sport had become pretty big. Guys were answering their phones and telling the person on the other line they were "watching the fights."

"The fights." That's still nuts to me.

Anyway, just about everyone was rooting for "The Iceman." The three of us knew that Jackson had his number back in '03 and Liddell hadn't really evolved as a fighter since then. We were also big fans of Jackson to boot. I mean, how could you not be?

So when he's standing over a half-conscious Liddell, howling at the top of his lungs, the three of us are jumping up and cheering. We're ecstatic.

Well, like I said at the beginning of this write-up... 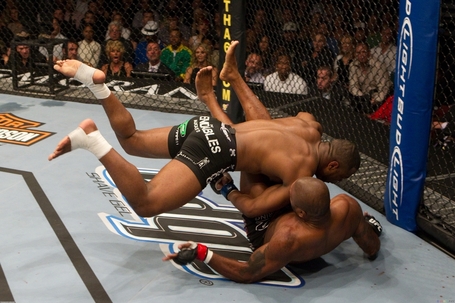 If you were able to jump into a time machine and set the date to May 28, 2010, you would have landed smack dab in the center of the tracks of one of the biggest hype trains for a fight in UFC history. That seems odd to say now.

In hindsight, the fight between Jackson and Evans meant very little. "Rampage" has fought just once since, a unanimous decision win, that seemed more like a loss, against Lyoto Machida. Rashad still hasn't been back in the cage. But this fight was a really big deal going in. My house was packed with eager onlookers, anxiously awaiting the main event.

The fight was given the full force of the UFC's promotional muscle. The two light heavyweight powerhouses were slotted opposite one another on The Ultimate Fighter (TUF) 10. With Kimbo Slice joining the cast, eyeballs were at an all-time high.

Add on the traditional "Countdown" show and even a three-part "Primetime" series and fans knew absolutely everything about each combatant headed into the fight.

Due to mostly clever editing, Evans was the traditional good guy, a well-spoken and caring teacher and coach while Jackson was cold and indifferent, just here to collect a check and whoop some ass.

Allegiance, at least at my house, followed suit. Of the 15 or so folks here that night, all but one were firmly in the corner of Evans. None of them were as confident and as outspoken as the lone "Rampage" supporter.

By the time the fight was over, we were all losers ... at least, that's how it felt.

Evans took a drawn out and mostly dreadful three-round unanimous decision win. Aside from cracking Jackson on the chin in the opening moments and a late near-finish flurry from Quinton, it was a snoozefest.

Victory at the Mrosko house was sweet, although bitter and the lone dissenter in the group left angry, slamming the door and providing far more excitement at home than Jackson vs. Evans did inside the Octagon.

Which leads us to "Rampage vs. Hamill."

Will UFC 130 on May 28, 2011, in Las Vegas provide us with yet another memorable Memorial Day weekend event? It's a solid card with each fight available for viewing but will the main event steal the show?

Speaking of which, what's with Quinton Jackson and his continued participation on these late May fight cards? He's 1-1 so far; is win number two forthcoming? Or will Matt Hamill rain on his parade?

Tune in tomorrow night to find out. And remember, MMAmania.com will provide live fight coverage of all the night's action, from the Facebook prelims at 7 p.m. ET through the Spike TV special at 8 p.m. ET and all the way through the main card on pay-per-view at 9 p.m. ET.

Until then, feel free to share your favorite memories from the Memorial Day weekend.