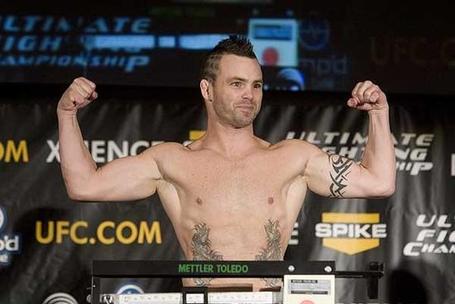 Kansas City, KS - Despite multiple lineup changes in the weeks leading up to tonight's "HDNET PRESENTS: TITAN FIGHTING CHAMPIONSHIP 18," (www.TitanFighting.com and www.HD.net) yesterday's weigh-ins at the Argosy Hotel Casino & Spa in Kansas City, MO went off without a hitch.

Seven world class professional fights are confirmed for the show, which will air live on HDNet starting at 10 p.m. ET and will emanate from the historic Memorial Hall in Kansas City, KS. The event will be headlined by former UFC lightweight champion Jens "'Lil Evil" Pulver in his continuing comeback attempt taking on renowned Taekwondo practitioner and Bellator Fighting Championships and Strikeforce veteran Brian "Mr. D" Davidson.

The 36-year old Pulver, who has competed in the past at 155 and 145 lbs. tipped the scales at a svelte 139 lbs. for the 140 lbs. catchweight affair. His opposition, the 35-year old Davidson, weighed 141 lbs. even. The matchup has begun to draw a great deal of praise both nationally and locally, with the cover of the sports page in the Kansas City Star featuring an article on Pulver's remarkable journey in MMA.

"Jens is one of the most beloved fighters in all of MMA. People genuinely want to see him do well and return to the highest levels of this sport," said Titan Fighting CEO Joe Kelly. "He is without question a true pioneer in this sport and he still has a place as an active competitor in this sport. Brian Davidson is without question a very exciting and challenging opponent and from a fight quality standpoint, I anticipate this matchup being the best main event we've done on HDNet."

In addition to the Pulver vs. Davidson main event, Titan Fighting Championship 18 received additional momentum earlier in the week when it was learned that former Oklahoma State University wrestling standouts Jake Rosholt and Jared Rosholt had both been added to the show.

The elder of the Rosholt brothers, Jake, weighed in at 198.4 lbs. Fighting for the fifth time in 2011, Rosholt will look to run his record for the year to a perfect 5-0 when he takes on another wrestling standout, John Ott. Ott, who made national headlines earlier this year following a courageous performance against former WWE superstar Bobby Lashley, weighed in at 199.6 lbs. for their 200 lbs. catchweight contest. Ott is looking to put on more than just a courageous performance this time out, as he hopes to defeat the former three-time NCAA heavyweight champion and ruin Rosholt's plans of returning to the UFC.

"Jake has stream rolled his opponents so far this year - not only winning but winning in dominant fashion," said Kelly. "He's without question ready to return to the UFC right now. However, Ott is going to be the toughest opponent he's faced this year and Jake's ticket to return to the UFC could be lost after the fight vs. Ott tonight."

The card will also feature Jake's 23-year old younger but bigger brother, Jared "The Big Show" Rosholt. The younger Rosholt is already 2-0 in his young MMA career and has been branded by several scouts and pundits as a future UFC heavyweight champion. Jared Rosholt weighed in at 258.8 lbs. while his opponent, Kirk Grinlinton, weighed in at 253.8 lbs.

"Since our alliance with HDNet, we've already seen Jason High and Aaron Rosa get picked up by Strikeforce and the UFC, respectively," began Kelly. "The scouts from every major organization watch Titan Fighting events in hopes of bolstering their rosters. All eyes will be on Jared tonight in his first television appearance. A strong performance will no doubt put him on the fast track towards winning a major national title. However, Kirk has more fights under his belt and has been training MMA a lot longer. I fully expect Jared to be tested."

Tickets for "HDNet Presents: Titan Fighting Championship 18: Pulver vs. Davidson" are still on-sale at Ticketmaster.com, all local Ticketmaster outlets, as well as the Memorial Hall box office. The main televised card will begin at 10 p.m. ET this Friday with the non-televised undercard start at 7:30 p.m. CT. The event will be brought to you by Combat Sports International (www.CombatSports.com), Monster Energy Drink (www.MonsterEnergy.com), Ink'd Out Apparel (InkDOutApparel.com), Supremacy MMA by 505 Games (watch the trailer at http://www.youtube.com/watch?v=5O4c_4RQokE) and the Argosy Casino Hotel & Spa (www.StayArgosy.com).

Complete weigh-in results for Titan Fighting Championship 18 are as follows: