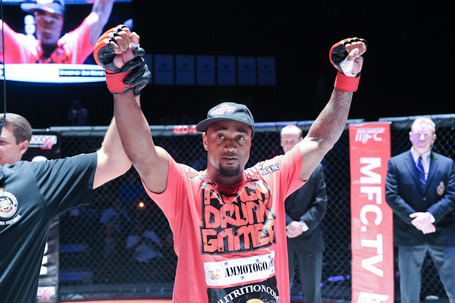 One respected professional to another, Pete Spratt doesn’t have a beef or any deep-seeded hatred toward Marcus Davis, his upcoming opponent at MFC 30: "Up Close & Personal."

And while Spratt is certain that the two will be cordial towards each other in the lead-up, and probably shake hands afterwards, "The Secret Weapon" believes all the goodwill will be set aside once they get down to business on Friday, June 10.

"At the end of the day, he’s an opponent who’s trying to bash my head in and I’m trying to do that to him. We’re going to bang it out," said Spratt, whose explosive showdown with "The Irish Hand Grenade" will be the semi-main event of the HDNet Card emanating from the Mayfield Conference Centre in Edmonton, Alberta.

There are occasions when two friends/training partners have squared off against each other, and more times than not, there’s so much respect and admiration that it leads to a dull affair without either man willing to step up and spark the action. Spratt (22-19), a crafty 40-year-old veteran, doesn’t believe there will be a lack of fireworks when he hooks up with Davis (18-8).

"I think we’re going to approach this like two brothers, and with brothers, they’re always trying to bring the best out of each other," explained Spratt. "It’s a sibling rivalry. Brothers always try to outdo the other. And it’s the same with friends – one wants to outdo and outshine the other. He’s going to try and take what I want, and what I want is redemption."

Spratt is seeking to redeem himself following the first encounter he had with Davis coming back in April of 2007. It was the San Antonio, Texas, product who was carrying the action and getting the better of Davis in the matchup between the two well-accomplished strikers.

But a costly error in the second round, and Davis’s jiu-jitsu skills, proved to be Spratt’s undoing.

"I felt the fight was going my way especially with the striking," recalled Spratt, who had shared trainer Mark Dellagrotte with Davis prior to their head-to-head meeting. "He got a takedown and spent quite a bit of time on my back trying for the rear-naked choke with no success. But I made a mistake at the end of the first round and his corner saw it, so when I got in the same position again in the second round, he got an inverted Achilles lock.

"The fight was going my way on the feet like most of my fights and I think I can do it again. I think he will want to strike with me again. I don’t think he has a choice but to get in there and stand with me. He’s been in some of the most exciting fights over the past few years ... a lot of great wars. I don’t think it’s going to be anything different."

In terms of mutual respect, Spratt sees similarities between his test against Davis, and the recent clash between boxing icons Manny Pacquiao and Shane Mosley. But where the similarities end is at the crowd-pleasing point. The boxers failed to deliver anything more than a lengthy exasperation for fans.

Spratt doesn’t want to be part of a copy-cat performance.

"They respected each other, went out and it looked like a sparring session as opposed to a big fight," said Spratt. "I took note of that, and I know that’s not the way me and Marcus are going to go after each other. "We’ve both got something to prove and we’re going to put on a great show."

Over the course of a career that has spanned 12 years and 41 fights, Spratt has at times felt his own enthusiasm wane prior to an upcoming bout. Not so for the rematch against Davis. In fact, Spratt, holder of the MFC’s 2009 Knockout of the Year, is probably eagerly anticipating this fight more than any other in a long time.

"This is the type of fight that gets me up and gets me motivated," was Spratt’s self-examination. "I’ve had my struggles to get motivated in the past but the MFC always puts me in intriguing matchups. "I put in a good performance against Demi Deeds (at MFC 29) – I saw the submission and I went for it. And I had another good fight against Luigi Fioravanti (at MFC 25). I’ve always wanted another shot at Marcus, and the MFC wouldn’t have me back at the age of 40 if I was going to come there and be boring.

Tickets are going fast for MFC 30: Up Close & Personal, featuring the MFC lightweight title fight between Drew "Night Rider" Fickett and Hermes "The Unreal" Franca plus the rematch between Sheldon Westcott and Thomas "Wildman" Denny.