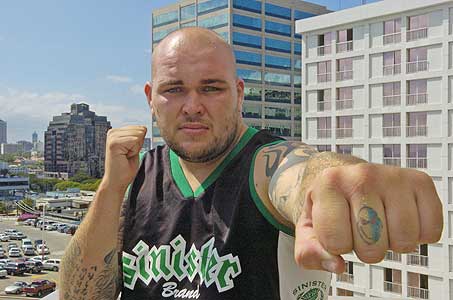 Former UFC heavyweight Wesley Correira was recently arrested in the parking lot of a Walmart in Hawaii and subsequently charged with first-degree burglary and second-degree theft.

Hawaii Tribune-Herald has the details:

Correira is accused of burglarizing a Hawaiian Paradise Park home Sept. 1, 2009. According to police, a television and assorted electronic equipment and games valued at $4,200 were taken.

Police arrested the 32-year-old Correira Wednesday afternoon in the Walmart parking lot. He was also charged with an additional second-degree theft charge, for allegedly taking an iPhone from behind the counter of a Makaala Street store April 8, plus failure to appear and two counts of contempt of court.

He is in custody at Hawaii Community Correctional Center in lieu of $19,900 bail.

The report goes on to state that Correira was also indicted for auto theft on May 5 while he already had multiple court cases pending for issues including shoplifting and terroristic threatening.

"Cabbage," just 32-years-old, is well known among fans of MMA for his iron chin and penchant for fighting with reckless abandon. His career, which began in 2000, stalled in 2008 following a technical knockout loss to Jeff Ford, which drove his record to 19-14.

He hasn't competed since and from the sounds of it, won't be doing so anytime soon.