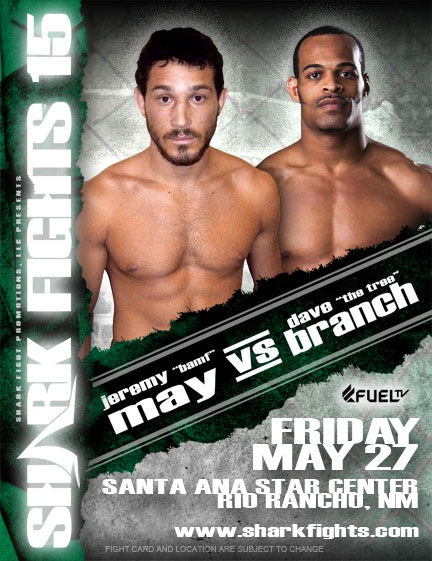 Amarillo, TX. - May 13, 2011 -Texas based mixed martial arts fight promotion company, Shark Fight Promotions, is geared up for another exciting night of fights. The fast-rising fight promotion has big plans to explode onto the national fight scene this year and they will begin that journey on May 27 at the Santa Ana Star Center in New Mexico.

Shark Fight Promotions aspires to be one of the top MMA promotions in the nation and they are well on their way. The New Mexico event is undoubtedly a very significant milestone for the popular fight organization, as it solidifies their official transition from a local to a national promotion.

Shark Fights 15 will take place on Friday, May 27 at the Santa Ana Star Center in New Mexico. In addition to a high-octane pro card line-up, the organizations debut event in the Land Of Enchantment will showcase some of New Mexico's top amateur MMA talent.

According to Wes Nolen of Shark Fight Promotions "We are looking forward to our debut in New Mexico and putting on a great show. We built the fight card with New Mexico fans in mind and feel that we have a stellar line-up. The amateur portion of the card marks another first for our organization and we are very excited. These young talented fighters are now able to use Shark Fights as a platform to advance their careers. We are thrilled to not only showcase A-list pro fighters, but also top level Amateurs looking to earn their pro cards. The card is stacked with elite talent on all fronts."

The Shark Fights 15 card will feature a total of 11 action-packed bouts. In addition to Camozzi vs. Villasenor and Branch vs. May the action-packed fight card will also feature New Mexico's own Bobby Huron out of Jackson's MMA, Bellator veteran Jared Downing of Cedar Rapids Iowa, WEC veteran Frank Gomez, the long awaited match-up between Kyle Bracey and Artenas Young , New Mexico's top amateur talent, and more!

Jeremy May vs. David Branch

*Card and Schedule Subject to Change

The event will take place on Friday, May 27 at the Santa Ana Star Center in New Mexico. Doors open at 6:30pm MT. Fights start at 7:30 pm MT. Tickets are available online at www.sharkfights.com and www.santaanastarcenter.com.