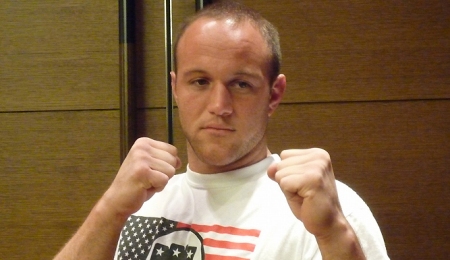 Brock Lesnar's second bout with diverticulitis has not only forced him out of his main event contest against Junior dos Santos at UFC 131 on June 11 in Vancouver, it has also necessitated a complete reshuffling of the card.

The UFC today announced the revamped fight card line-up and let's see if we can get this thing in order.

Stepping in to replace Lesnar in the headliner will be Shane Carwin, who was previously booked to take on newcomer Jon Olav Einemo.

Einemo will now square off against fellow Octagon debutant Dave Herman, who already had a date on the card against Joey Beltran, who gets a completely new opponent -- and yet another promotional newcomer --  in the form of Aaron Rosa.

If you don't know much about Jon Olav Einemo, you're not the only one. Fortunately, we've got you covered and you can learn plenty about the heavyweight submission specialist by clicking here.

The long and short of it, though, is Einemo is a 240-pound 6'6'' monster and the only man to ever defeat Roger Gracie in the heralded Abu Dhabi Combat Club (ADCC) Tournament.

His new opponent in the Great White North will be Herman, who will be making his debut with the world's largest fight promotion following after an impressive run through organizations ranging from EliteXC, Sengoku and Bellator.

"Pee Wee" is a 26-year-old Team Quest wrestler that has gone an impressive 20-2 throughout his four short years in mixed martial arts. Even more impressive is the fact that just one of those 22 fights has gone the distance.

Joey Beltran will be fighting more than a newbie in Aaron Rosa -- he's also likely fighting to remain gainfully employed with the UFC.

The California native, after winning his first two fights with the promotion, has dropped two in a row, a pair of decision losses to the always tough Matt Mitrione and the equally game Pat Barry.

Time to get dirty and see if he can't gut one out to keep his job.

Standing in his way is Rosa, a well-traveled heavyweight who's fought everywhere except the big show. He'll make his UFC debut after four wins ranging from Bellator to Shark Fights and, most recently, a submission win over Abe Wagner at Titan Fighting Championships 17 on March 25.

The short notice fight isn't exactly ideal but take chances when they present themselves, right?

For all the updated UFC 131 fight card and news click here.