History in the Making: Miguel Torres defends against the Land of the Rising Sun (Yoshiro Maeda edition)

Share All sharing options for: History in the Making: Miguel Torres defends against the Land of the Rising Sun (Yoshiro Maeda edition)

All too often a mixed martial artist rips through the regional circuit only to get to the big show and falter. He is exposed as a fighter of marginal talent and his inflated ranking begins to tumble down and out of the rankings.

Such a case can be argued for Miguel Angel Torres, World Extreme Cagefighting's (WEC) most decorated bantamweight champion.

He entered the defunct promotion with an amazing record of 33-1. But a glance at his resume reveals itself as littered with men owning losing records or worse, only a single fight to their name.

Some pundits all but pulled out a soapbox and stood on it when they decried Torres' ranking not only at the top of the 135-pound division but his inclusion in many pound-for-pound lists.

But this column isn't about that.

Perhaps the Tristar gym fighter is a member of the sport's elite, perhaps he is not. But while defending his WEC title, he engaged in two classic battles with a pair of warriors from the Land of the Rising Sun.

Torres takes on Demetrious Johnson at UFC 130: "Rampage vs. Hamill" on May 28, 2011, so we'll take a look back on those two bouts and remind ourselves that fighters don't have to be the best to put on an amazing fight.

Up first, his title defense against Yoshiro Maeda.

The title currently held by Dominic Cruz was won by Miguel Torres at WEC 32: "Condit vs. Prater" when he submitted then-champion Chase Beebe.

His first defense was against Pancrase and DEEP veteran Yoshiro Maeda. The same night Torres won the bantamweight title, Maeda made his WEC debut by liver kicking Charlie Valencia into submission.

At WEC 34: "Faber vs. Pulver," they collided and while Torres' hand was raised that night, everyone who watched the fight was the true winner.

The two fighters circle the center of the cage to start off and Torres throws a kick that his opponent catches. Maeda forces onto the mat and momentarily considers diving into the American's guard but decides against it to avoid an upkick or triangle.

They exchange missed head kicks and the champ is able to close the distance, locking the Japanese fighter in a Thai clinch. Torres shoots a couple of knees towards Maeda's head before the challenger is able to break free.

They're back on their feet, facing each other, hands up when a leg kick from the challenger chops Torres down although he immediately pops up. Blood is already trickling from his forehead.

Torres charges in with a left, then a right and ends the flurry with a knee that doesn't find its mark. Maeda ragdolls him against the cage and clinches up.

The two separate off the cage and Maeda is able to catch another kick, putting Torres on his back once again. From there, the apprehension the challenger felt earlier in the round when he refused to engage the American on the mat becomes justified when the champ immediately searches for an omoplata.

The Japanese fighter defends brilliantly and ends up on his feet, sending buzzsaw-like kicks to the still-downed Torres.

The champ begins using his superior reach to force his opponent to a distance, throwing head and body kicks that keep Maeda at bay. But again, a kick is caught by the wily challenger. Torres, confident in his submission game, pulls guard and drags the Pancrase veteran down to the mat.

A botched kneebar attempts find both fighters back on their feet with the challenger this time throwing heavy leather. The best blow in the remaining minute belong to the champion, however, who buries a knee into Maeda's ribs.

The two warrior present more caution in the second round, tasting what each had in store during the first five minutes.

Torres is keeping busy with the kicks but Maeda still manages to time one every so often. He yet again dumps the American onto the mat and immediately begins to throw lightning fast kicks to his downed opponent. The champion begins to trash talk the challenger before hoisting himself up and deliver a kick of his own to Maeda's jaw.

The blow is superficial but the audience roars with approval. Even Maeda is inclined to give the champion props for it.

The two trade combinations as the pace begins to slow. Almost midway through the round, Torres begins to press the action and forces the challenger against the cage. Pulling the Japanese fighter's head down, he delivers a steady steam of uppercuts before Maeda is able to swing Torres towards the fence.

A combination by the challenger is followed by another caught kick that forces the American onto his back. They spin and jockey for position on the ground until Maeda grabs hold of Torres' foot in a heel hook attempt.

The champion defends with elbows to the thighs and kicks to the body until the Japanese fighter switches to a toe hold submission. Torres, never one to be outdone, slaps on his own toe hold.

It's an absolutely awesome sight to see.

The American, hands wrapped around Maeda's foot, resumes kicking his opponent's body until both holds are broken. The audience is eating this fight up.

More scrambling on the ground ends with Torres taking Maeda's back to answers with several unanswered elbows to the champion's head. Now on his back, the American nearly sinks in a triangle but the challenger is able to pop his head out.

Maeda stands up, back away, and allows Torres to get to his feet. The audience cheers. It's one of those moments that make you love the sport.

The champ forces Maeda against the cage and nearly finishes him off with a guillotine choke before slipping into mount and delivering elbow after elbow to end the round.

Round three begins and Torres begins using his jab to snap Maeda's head back. He closes in and drills a knee into the challenger's body before jumping back out of range.

A leg kick is countered with a left straight by Maeda but almost immediately eats a huge right from the champ. The jabs have begun taking their toll on Maeda's eye and the previous punch only serves to accelerate the process.

Another jab and then another. Torres lands jab after jab that connect and continue to cause swelling around the challenger's right eye.

At the midway point of the third, the champion is picking his challenger apart. He continues using his jab but also peppers in knees to the body when Maeda overcompensates to protect his badly swollen eye.

The Japanese fighter is able to get Torres to the mat and lands several hammerfists before the champ swings him into guard. From there, he lands short punches to the right eye, which is beginning to look disgusting.

Back on their feet and the bantamweight title holder continues the punishment of Maeda's right eye that has been the story of the third stanza. Jabs until the horn sounds spell the Japanese fighter's doom.

One look from the doctor and the fight is called off. Torres successfully defends his title and defeats a game Maeda, who looks like a freak show main attraction.

But in the end, the two men were not enemies but merely competitors. And that competition helps breed friendship and respect. 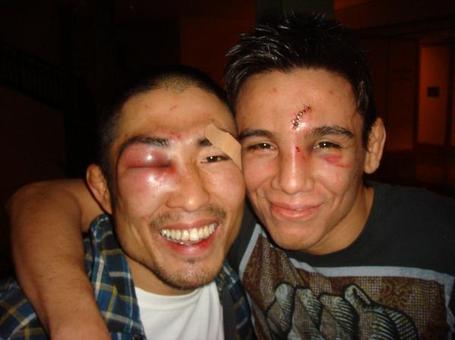 Tomorrow: Part two featuring Miguel Torres, Takeya Mizugaki, and the "Fight of the Year" candidate that shouldn't have been.