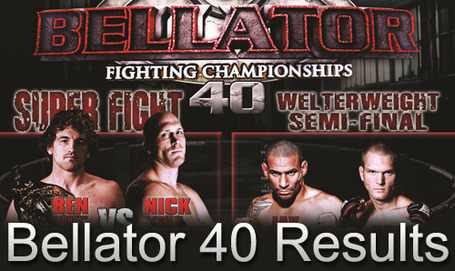 Bellator Fighting Championships is all set to go down TONIGHT (Saturday, April 9, 2011) live from the First Council Casino in Newkirk, Oklahoma.

MMAmania.com will provide LIVE blow-by-blow, round-by-round coverage of Bellator 40, beginning with the MTV2 telecast at 9 p.m. ET. In addition, we will deliver up-to-the-minute quick results of all the under card action much earlier in the evening.

Bellator 40 is headlined by a three round, non-title bout between "Funky" welterweight champion Ben Askren and well-traveled MMA veteran Nick "The Goat" Thompson.

Also featured on the televised portion of the card will be welterweight tournament semifinalists Jay Hieron and Brent Weedman duking it out to determine Rick Hawn's next opponent in the 170-pound finals.

In addition, 155-pound "Cupcake" Lloyd Woodard will square off against Michael Chandler in their semifinal bout for the chance to face 155-pound finalist Patricky "Pitbull" Freire.

Complete Bellator 40 results and live play-by-play after the jump.

Round one:  Thompson with some wild footwork.  Head kick caught by Thompson,  puts Askren on his back, but Askren gets top position quickly, works from half guard.  Thompson looking to grab a leg, Askren avoids and maintains position.  Knees to the body from side control by Askren now.  Askren in half guard, landing some hammer fists.  Thompson looking for a leg lock, easily avoided by Askren, and he's in side control once again.  Askren riding on top, Thompson can't improve position.  Thompson rolls to his knees, tries to get away, eats some hammerfists.  Askren rides to the end of the round, Thompson gets to his feet, only to be brought down right at the bell. 10-9 Askren

Round two:  Big left hand into a take down right out the gate for Askren.  Askren moves to side control and goes to work, but isn't allowed to pass to mount by Thompson.  Leg lock attempt by Thompson is futile, Askren rolls him over and takes his back.  Choke fails for Askren, they work, Askren drops a big shots while standing over Thompson but they miss.  Askren works in half guard, stands, and is tripped by Thompson while he's on his back.  Askren jumps bakc into side control, looks for a choke as Thompson tries to escape.  Thompson avoids, and ends the round on bottom again.  10-9 Askren

Round three:  Thompson jabbing and avoiding Askren early, but is taken down yet again.  Thompson manages to get Askren in his full guard, but can do nothing with it.  Askren passes to side control, and begins to work quick, light ground and pound.  Thompson gets to half guard, but cannot escape.  Askren backs off and stacks Thompson, then moves to north south with Thompson turtling up.  Thompson manages to stand, Askren dives for an ankle pick, but fails.  Thompson dives on Askren, but can't accomplish much as the round comes to an end.  10-9 Askren

Round one:  They touch gloves and we're off.  Weedman comes forward with strikes that miss, leg kick misses for Hieron.  They exchance and Weedman drops Hieron, he pounces, and looks to gain control on top.  After they scramble Weedman gets to mount, then takes Hieron's back.  Weedman loses the rear naked choke and they scramble once again.  Hieron looking for a a D'arce choke, it looked deep, but he can't finish, he works into Weedman's guard.  Weedman looking to escape, but no dice, Hieron looking for the choke again but let's it go sooner this time, and yet again finds himself in Weedman's guard.  Hieron working some light ground and pound, Weedman avoiding damage well.  Big upkick from Weedman, and Hieron gets back into his guard.  Weedman looking to stand, but fails.  The pace slows during the final minute of the round, but picks up at the thirty second mark, Hieron letting Weedman stand and hitting him with a knee.  They clinch, trade some strakes, and the round comes to an end.  10-9 Hieron after a scary start.

Round two:  Weedman coming forward, and attempts two kicks, both missing.  Weedman eats a jab from Hieron, still content to stand at distance.  Hard right hand from Weedman, doesn't faze Hieron though.  Weedman again throwing that long right straight.  Uppercut from Hieron at the end of an exchange lands.  Quite even in the stand up so far, nothing major landing, but some solid shots are keeping things interesting.  Take down attempt by Hieron is stuffed.  Weedman stalking, lands a right, eats one from Hieron.  Just over two minutes left and it's still either man's round.  Looping hook from Weedman misses, Hieron counters a knee with a solid straight.  They trade straights, Weedman lands a leg kick.  Superman punch starts a combo for Hieron, nothing landing though.  Weedman misses a leg kick, then eats one.  Another leg kick from Weedman.  Hieron on his bicycle, trying to counter, straight hand and body kick land.  The round ends.  10-10 round.

Round three:  Nice right hand from Hieron, he has to kick up the counters if he's going to continue backing up.  Take down for Hieron and he finds himself in a guillotine, he defends, and eats a knee on the exit as they stand.  Leg kick from Weedman followed by a left from Hieron.  Another leg kick from Weedman again countered with the straight.  Hooks from Weedman land, but Hieron lands solid and looks to slightly rock Weedman.  Weedman right back in the mix though,  Hieron avoiding may punches now, but counters are missing.  Hieron lands a punch, throws a glancing head kick.  Leg kick leads to a trip for Weedman.  Weedman working from back side control.  Hieron rolls, Weedman in side control.  Ground and pound leads to full mount for Weedman, Hieron trying to get out the back door, and he pulls it off, landing in Weedman's guard.  Hieron trying to land some ground and pound, but it may be too late.  Weedman throwing up a submission at the last moment, but Hieron avoids, and the fight comes to a close.  10-9 Weedman.

Round one:  Here we go.  They trade jabs and straights early, Woodard avoids a half hearted take down early, but eats a blitz of strikes from Chandler.  They clinch against the cage and BIG slam from Chandler, and he's working light ground and pound from side control.  Woodard manages to find his way to his feet, but Chandler gets the take down again, and works in Woodard's open guard.  Woodard trying to shut down Chandler, and is doing good, controlling his arms.  Chandler looks for an arm triangle momentarily, but loses it.  Woodard works to his feet and doesn't let Chandler get his back, they stand and clinch against the cage, then separate.  They trade at striking distance, but don't commit to any blows.  Chandler looks for the take down again, and after a few seconds of working on his knees, gets Woodard down and works in open guard once again, and is looking to pass.  Woodard again controlling well, but it won't win him the fight.  Woodard pushes Chandler away with his legs and looks to land a punch on the way up, Chandler gets out of dodge, then returns for another take down, which he secures.  Chandler working small punches in open guard, lands a decent right hand as he postures up.  Chandler ends the round with a hammerfist.  10-9 Chandler

Round two:  Head kick misses for Woodard.  Inside leg kick from Woodard causes Chandler to slip.  Woodard staying patient on the outside now.  Chandler jumping in with powerful hooks, one grazes Woodard.  A leaping hook from Woodard now, misses.  Leg kick then take down attempt from Chandler, Woodard avoids, and feeds Chandler a big knee on the way up, Chandler doesn't look phased though.  Chandler chases him down and gets a take down, and he's in Woodard's open guard once again.  Woodard is doing great at avoiding damage and not letting Chandler pass, but can mount no offense.  Woodard uses the fence to get to his feet, Chandler looking for another take down against the fence, but can't get it.  Woodard lands a nice uppercut, but is taken down right after.  Woodard looking for a Kimura, and gets a sweep with it.  Woodard controlling Chandler from the back against the fence, Chandler working hard to gain position, but Woodard eventually takes his back.  Hooks are in for Woodard, Chandler stands, Woodard looking for a standing rear naked choke, Chandler drops to his belly, the round ends with Woodard landing some punches while on Chandler's back.  10-9 Woodard

Round three:  Leg kick for Woodard, Chandler answers with an uppercut.  Both men looking to land on the outside.  Solid right hand from Chandler and they clinch.  Woodard working knees with double underhooks against the cage, Chandler backs away and eats an uppercut.  Chandler looks for the take down, Woodard defends, but is taken down.  Woodard gets right back to his feet, and taken down with a slam shortly after.  Woodard attempts a sweep but doesn't get it.  Chandler in Woodard's open guard (what's new) and lands a few solid punches with the right hand.  Woodard looking to regain control, but is having trouble now.  Chandler passes to half guard now.  Light ground and pound from Chandler, Woodard shuts him down, and they are stood up.  Woodard charges Chandler, lands a grazing head kick,  Chandler answers with a take down, Woodard rolls him, looks to stand, but is taken down again.  One minute left and Woodard has to make something happen.  Chandler mounted Woodard momentarily, but is pushed back to half guard.  Chandler ending the round with some ground and pound, and the bell sounds.  10-9 Chandler