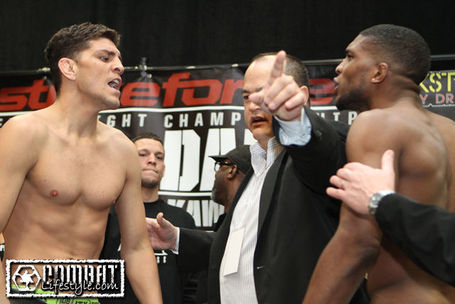 Tonight (April 9, 2011) at Strikeforce: "Diaz vs Daley," the Strikeforce welterweight title is on the line as two-time defending champion Nick Diaz squares off with Paul "Semtex" Daley at the Valley View Casino Center in San Diego, California.

The Stockton native, Diaz, is looking to continue his huge wave of momentum he's been building since leaving the UFC in late 2006. The Cesar Gracie-trained fighter is undefeated in the past two years and has looked dominant as the Strikeforce welterweight champion.

The challenger, Daley, is out to repair his tattered image. "Semtex" left the UFC on very bad terms and still pays for it in the public relations department. Defeating Diaz for the title certainly wouldn't hurt.

After the two trash talkers had a disappointing display of mutual respect in the pre-fight buildup, tensions finally spilled over last night at the weigh ins. Daley and Diaz got in each other's faces and Strikeforce CEO Scott Coker had to play referee.

Can Daley get back in Zuffa's good graces with a victory? Will Diaz's iron chin finally get cracked? Will the champion continue to defeat his challengers at their own game?

Let's find out after the jump:

How he got here: Nick Diaz did not enjoy the plethora of wrestlers he had to run into on a nightly basis in the UFC. A trio of consecutive losses to Diego Sanchez, Joe Riggs and Sean Sherk gave him second thoughts about sticking around in the promotion. Diaz would find a new home in Elite XC, but lost a doctor stoppage to KJ Noons for its inaugural lightweight title in late 2007.

Since the initial Noons fight, Diaz has been on an absolute rampage, destroying everyone in his path including legends like Frank Shamrock, as well as avenging his loss to "King Karl" this past October in a thrilling five round stand-up war.

Diaz's stock has risen significantly in the last year and he's climbed up the ladder of the welterweight rankings. When the second half of the Strikeforce Heavyweight Grand Prix was delayed, Diaz stepped up to headline a major event, defending his title against Daley, a former UFC 170-pound contender.

How he gets it done: The Cesar Gracie blackbelt has a plethora of weapons. Diaz has an unusual volume-punching striking style, but it's remarkably effective. The genius behind Nick's striking is his unpredictability. Watch this fascinating clip from his 2009 fight with Scott Smith:

Notice how Diaz keeps up a constant attack from all sorts of angles. Diaz pounds at the head with short hooks, jabs, haymakers and the second Smith covers up he throws his most powerful punch, an uppercut to the body that folds "Hands of Steel" up.

Even if Smith had Muhammed Ali reflexes, he'd have zero chance of fully defending this barrage of punches.

The "209" fighter has incredible submissions and flexibility, but he does not have very strong wrestling. He had considerable difficulty putting former boxer KJ Noons on his back in their rematch late last year. That being said, Diaz is crafty and if he has to, he'll find a way to get the fight to the ground. If Diaz is in trouble, expect a clinch, maybe even an attempt to pull guard to work his excellent bottom game.

How he got here: "Semtex" was on the fast track to a UFC title before All-American wrestler Josh Koscheck exposed his lack of a ground game on the national stage. According to Daley, Koscheck repeatedly insulted him while holding him down for three rounds and once the final horn sounded, the Brit lost his cool and threw a sucker punch at "Kos." The blow was deflected, but the damage to Daley's reputation had been done.

He was immediately expelled from the UFC.

Since his release, Daley has gone undefeated (4-0) in less than a year. He had some difficulties against an undersized Jorge Masvidal at Shark Fights 13, but rebounded with a knockout of the year performance against Scott Smith this past December in St. Louis in his return to Strikeforce. After crushing Yuya Shurai in a tune-up fight in England, Daley, after initial hesitation, accepted a title shot against Diaz.

How he gets it done: There are several words that describe Daley's stand up: Devastating, vigorous, unmerciful. The confident Brit can end a fight at any time if his opponent is willing to stand and trade blows. While the statistics say Daley and Diaz have the same reach, the tale of the tape is a bit misleading. Diaz prefers to stay on the outside and pick his spots, but Daley loves to come inside and really put his hips into his counter hooks. Watch his technique in action against poor, poor Scott Smith, the only fighter these two men have in common.

Daley sets up his attack with repeated outside left hooks, but his "money shot" is his sharp inside left hook. Watch how he plants his feet and perfectly times his strike as Smith haphazardly wades in. Daley explodes with his hips and the result is pure desolation.

"Semtex" needs to slip Diaz's relentless barrage of attacks and get inside. Despite his opponent's reputation for a granite chin, I doubt anyone could stay conscious if "Semtex" explodes with an inside assault.

Fight "X Factor:" I don't think the biggest factor in this fight will be Diaz's ground game, his stand up or Daley's power. It will be the head games Diaz plays in the cage. The Stockton fighter is infamous for taunting opponents, throwing both arms in the air and daring them to come to him. If you watch closely, he's also a talker. Who knows what he's saying for sure, but I doubt he's discussing the state of the Middle East with his opponents.

Daley has lost his cool before and he finally riled up Diaz at the weigh-ins yesterday. If Diaz can get inside his head, "Semtex" is volatile enough to lose focus of his gameplan and play right into the champion's strengths. Keep your eyes (and ears) on Diaz's mouth during this fight.

Bottom Line: Yes, Nick Diaz is a more well-rounded mixed martial artist, but as the Showtime promos say, it can all change in one punch. While the champion is hailed for his ability to absorb punishment and keep the pressure on his opponent, he's been rocked several times in his career. Marius Zaromskis and KJ Noons both hurt him temporarily in recent title fights and if Daley smells blood, he is not going to relent until the Strikeforce welterweight belt is wrapped firmly around his waist.

Diaz's propensity of beating his opponents at their own game may come back to bite him in this fight, but don't underestimate his ability to fight intelligently and stick to a gameplan. I guarantee he has something in the works that "Semtex" does not expect.

This bout has all the means of a "Fight of the Year" candidate and both men have delivered on the biggest stage in the past. There's no doubt in my mind that they won't step up again.

Who will come out on top at Strikeforce: Diaz vs Daley? Let us know in the comments below!

Who walks away with the Strikeforce Welterweight Title tonight?