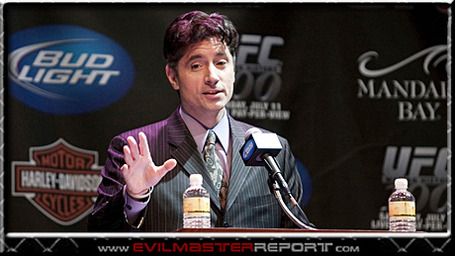 Chael Sonnen has finished his suspension with the CSAC, but he's still in trouble with the NSAC. Keith Kizer believes Sonnen has lied in giving his explanations for his steroid use.Kizer wants a formal hearing and alot of questions answered before giving him cornermans license to coach on TUF 14. Kizer said " I usually just give that administratively to corner men, but i will not do that for Mr. Sonnen". Sonnen had told the CSAC and Inside MMA that the NSAC had approved his testosterone use prior to his UFC 109 match with Nate Marquardt. Keith Kizer is calling bullshit on his story, and even told Sonnen "Thats a ridiculous explanation". Kizer says they had never discussed the Testosterone replacement therapy.

Kizer wants to hear him address his current legal situation of money laundering, and would like to question him over comments he made after his WEC 31 fight with Paulo Filho as well. Sonnen said after the fight that he did not tap to a Filho armbar. Kizer said that was an "out and out lie about what happened in the match"

Kizer has made it very clear he is not going to make it easy for Mr. Sonnen. Which means Sonnen as a TUF coach might not happen.

What do you think Maniac's? Do like Kizer's approach to treating the cheating MMA fighter and money laundering real esate agent?