Share All sharing options for: Ultimate Fighter 13: Episode 2 recap and discussion for 'Lesnar vs dos Santos' 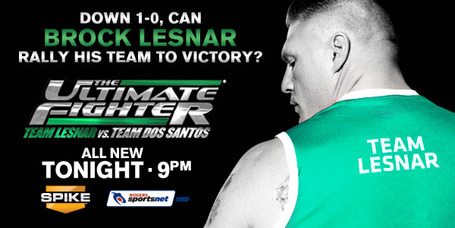 The Ultimate Fighter (TUF) 13: "Team Lesnar vs. Team Dos Santos" returns with episode two and after the coaches picked their teams in last week's episode, "Cigano" was able to jump out to an early 1-0 lead in the opening round of the elimination bouts.

Will Brock be able to even the score?

Things start off in the gym and Coach Dos Santos is pushing his team to train hard. Shamar Bailey thinks a couple of the guys are struggling mentally, including Keon Caldwell, who misses his family and may not be 100-percent committed to the competition.

On the flip side of the coin, Coach Lesnar is brooding after his opening round loss, still upset that he "can't make chicken salad out of chicken shit" and admits "you can't polish a turd and make it look pretty."

Keon Caldwell is on shaky ground again after being haunted by his six-year-old daughter's parting words. To summarize, she's going to miss him and he already misses her -- enough to want to jump ship and get back to her.

That doesn't sit well with Coach Cigano, who tries to convince him he's doing himself and his wee one a disservice by not capitalizing on this opportunity. The Brazilian bossman calls in UFC President Dana White to deliver his patented "Do you wanna be a f-----g fighter?" speech.

Time for the next fight announcement and Team Dos Santos (TDS) selects Javier Torres to fight Chris Cope. It's another classic example of using your best guy to eliminate the other team's worst. Asst. Coach Lew Polley has training experience with Cope and it's hardly a flattering account.

Torres explains his start in mixed martial arts and it begins in a Mexican market 11 years ago with a UFC DVD. Most of the team believes he'll run right through Cope and put TDS up 2-0. Torres tells the camera he's fighting for his wife and his soon-to-be-born child.

After Polley is done taking a dump on Cope he tries to push Caldwell a little harder in the gym and ends up pushing him right out of the competition. Keon is too homesick to continue and calls it quits.

During the drama Chris Cope is in the gym hoping to represent Team Lesnar while also silencing the haters. He refers to himself as "a grinder" and promises Torres a good fight. Coach Lesnar doesn't sound convinced, remarking that Cope has yet to "wow" him.

Brock rallies the troops to explain that anything can happen inside the cage and Cope can win if he wants to "by putting the leather where it has to go." His teammates think he's too nervous and too wound up before the fight to be effective but still have a "wait and see" attitude.

Round 1: Torres charges and heads collide. They struggle against the cage and exchange knees. "Gude Javier!" They separate after a minute and a half of hugging and Torres is taunting. They lock up and it's back to the cage. Torres with a trip takedown but Cope is up and escapes an armlock. More cage hugs and foot stomps. They break away and Cope lands a Superman punch. They resume cage hugging. Whaddaya say Herb can we get this thing off the fence? Cope with a big elbow. And another. Torres can't get the trip. They must have reversed about 87 times. Ten seconds left and they're back to the center of the Octagon. Cope with a haymaker and Torres smiles. End of round. 10-9 Torres for aggressive hugs.

During the commercial break there's a hilarious TapouT spot featuring Ryan Bader trying to mug like a badass.

Round 2: Cope has a gash under his left eye. Chris charges and right back to the fence we go. Save us Herb. A quick breakaway and Coach Lesnar asks "Where's your kicks buddy?" He finally unloads one but they tie up and go to the fence. 44 reverses later and they're still there. Everyone screaming for them to get off the cage. They trade elbows. They separate and trade low kicks. "This is it buddy!" Cope aggressive with kicks and Javier ties him up. Cope escapes and pushes forward but they lock up and go to the cage. AGAIN. They open up and trade kicks. Torres looks gassed. Twenty seconds left and it's a hug-off. 10-9 Cope. Putrid fight and we still have another round to go.

Round 3: Cope is fired up. They exchange punches and kicks but neither fighter lands anything significant. Torres rushes and to the fence we go. Cope muscles him down but Torres springs right back up. In the middle of fighting Torres tries to call a time out and Herb denies him. Nut shot and Torres gets the break he was looking for. They quickly resume and go to the cage for some more hugs and reversals. Cope backs off. "Yeah! That's why you're here buddy!" Torres drives him to the cage and even his own coach is yelling at him for it. Cope pushes away and Torres Superman punches his way to a clinch and they go to the wall. Cope with knees and an uppercut. Cope with an elbow. "Chris Cope wins!" Lesnar shouts with ten seconds left. Hideous.

Back in the locker room Coach Lesnar goes back to his "Any Given Chicken Shit" speech and his team doesn't seem to mind, they're just happy to have the dubya. Team Dos Santos is understandably miserable and Asst. Coach Polley blasts them for giving one away.

Stay tuned next week as Chris Cope pisses off his teammates, a "knucklehead" replaces Keon Caldwell, Coach Dos Santos has to put Lew Polley in his place and two more welterweights go to war.