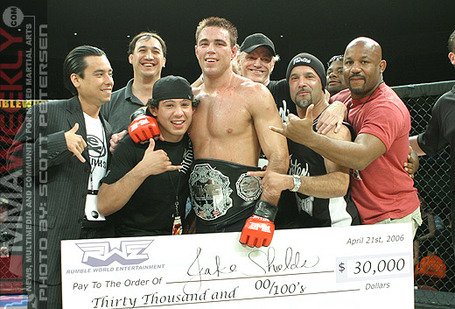 Jake Shields went back to California without his Shooto title.

He lost the belt to Akira Kikuchi in a fight that the Japanese fighter thoroughly dominated by outgrappling the American wrestler. It was a one-sided affair, one that dealt Shields his second loss at welterweight.

He took nearly a year off before making his return in a small California promotion, beating future Bellator star Toby Imada. He then headed back to the site of his Shooto title win, the biggest achievement in his career thus far: Hawaii.

Road to Toronto is a special series leading up to UFC 129: "St. Pierre vs. Shields."

We'll take a look at some of the most important moments in the careers of the champion (Georges St. Pierre) and his challenger (Jake Shields), including the ups and the downs and the highs and the lows. We'll examine the instances in time that have helped shape the men that headline this Saturday's (April 30, 2011) card, the biggest in UFC history.

Halfway through our countdown, today's edition will focus on Shields' performance in the Rumble on the Rock welterweight tournament and in particular, his victories in the semi-finals and finals.

The mark of a true champion is facing adversity and overcoming it.

Shields had to decide if he fit the bill or not.

After dispatching of Imada at the final Kage Kombat show, Shields accepted an invitation to compete in the Rumble on the Rock welterweight tournament. Not operating under the Unified Rules of MMA, the weight limit was 175-pounds, which opened up the playing field a bit.

Fighters who normally fought at middleweight made the drop to compete. Fighters such as former UFC Middleweight Champion Dave Menne, Yushin Okami, and current 185-pound kingpin Anderson Silva filled out the roster alongside long-time 170-pounders such as Carlos Condit, Frank Trigg, and Renato Verissimo.

Shields found himself included in what was the best collection of fighters not signed to either Pride or the UFC. It was a big deal.

And he knew it.

In the opening round at Rumble on the Rock 8, he faced off against Menne and won the fight via unanimous decision. Winning the Imada fight was a step in the right direction after a heartbreaking loss in Japan but defeating a former UFC champ from a heavier weight class was something else altogether.

This, no doubt, gave the American wrestler the confidence needed to progress through the tournament.

And with fighters like Okami, Condit, and Trigg still left in the pack, he was going to need all the confidence he could get.

In the semi-finals, Shields was booked against Okami. The Japanese fighter was a bit of an anomaly compared to his fellow countrymen. His style was decidedly more Western, a grinding wrestling style that made him an interesting match-up against Shields.

When they met at Rumble on the Rock 9, it was a grueling affair. Shoved up against the cage or pressed onto the mat, the two fighters jockeyed for the slightest advantage. The fight was a a positional war, a grappling clinic.

The first round had little action and was fairly even but Shields began to break away in the second. He threatened with submissions and controlled the pace against his larger opponent.

But Okami is a notorious slow starter and this, once again, proved to be his undoing. Despite being the aggressor in the final round, landing excellent ground and pound that opened up his American opponent, it wasn't enough to warrant a victory in the judges' minds.

Shields had won. It took fifteen grueling minutes but he pulled off the victory.

There is still a bit of debate as to whether or not the San Francisco native deserved to have his hand raised. But until MMA judging becomes a clear-cut science, those debates on incredibly close fights will continue.

After taking the best Okami had to offer for three full rounds, Shields was set to take on Carlos Condit in the finals. Unlike the energy-sapping fight Shields had engaged in, "The Natural Born Killer" won his semi-final tilt against Frank Trigg in less than two minutes.

The advantage was Condit's ... or so it would seem.

The final bout of the Rumble of the Rock welterweight tournament was the kind of fight Jake Shields is now known for: takedown, smothering top control, ground and pound. Repeat as needed.

Condit, despite having only fought for 88 seconds, couldn't stop the wrestler's takedowns. Shields fought like it was his first fight of the night, rarely showing any inkling of fatigue.

"The Natural Born Killer" spent nearly all of the first round, save for the opening moments and a quick doctor time-out, on his back. He simply had no answer for Shields' grappling chops. The second and third rounds were more of the same.

Inside a vacuum, it's an impressive performance by the former Shooto champion. But when you take into account he had fought Okami, a natural -- and huge -- middleweight, just a few hours earlier, Shields' grappling clinic becomes even more extraordinary.

It's Shields dogged-like focus to a gameplan that is built around his skills that draws the praise and ire of fans. His style isn't the flashiest but it gets the job done. And it worked to perfection on that April night in Honolulu.

Jake Shields was back.