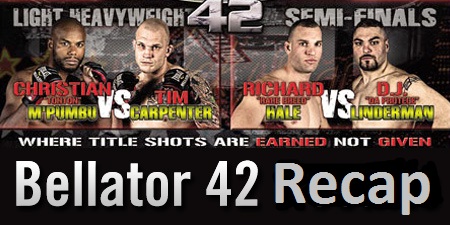 Bellator 42, which aired live from the Lucky Star Casino in Concho, OK last night (April 23, 2011), is officially in the books. There wasn't a ton of "name" talent on display, but every fighter made their mark with exciting bouts which included yet another "YouTube moment."

The final bout of the evening, a light heavyweight tournament semifinal match between D.J. Linderman and Richard Hale, was razor close. Hale and Linderman both worked their respective gameplans in the first two rounds with Hale utilizing his reach and hammering away at Linderman's legs with inside thigh kicks while Linderman wisely got inside and landed big left hooks, constantly pressing forward aggressively.

The third round was the defining round of the fight as Linderman relentlessly clinched with Hale, looking for a takedown. Hale, though, fell forward into full mount and spent the final half of the stanza plastered to Linderman's back looking for a rear naked choke.

When it was all said and done, the judges awarded Hale a split decision victory. It was considerably less controversial than last week's robbery of Marcos Galvao against Joe Warren as you could have made a case for both men to win the first round.

Hale will have his hands full in the finals of the light heavyweight tournament.

In the feature bout of the evening, Bellator standout free agent featherweight Ronnie Mann put on a show against Nebraska wrestler Josh Arocho. Mann's adept ground game completely neutralized Arocho's wrestling, immediately popping up from takedown attempts as well as pulling off beautiful sweeps. Mann spent much of the three rounds pounding away on the American's face with elbows and punches from guard.

By the time the bout went to the judges, Arocho's face was a battered mess and Mann was awarded an easy unanimous decision, even winning the bout 30-25 on one judge's scorecard.

Mann is practically guaranteed a spot in the next Bellator featherweight tournament, which is shaping up to be extremely deep.

Bellator scored their highlight of the night with Christian M'Pumbu's beautiful TKO of formerly undefeated Tim Carpenter. Carpenter unwisely chased the M-1 veteran across the cage, eating leg kick after leg kick. When both men finally exchanged, M'Pumbu landed a beautiful right hand that connected square on Carpenter's chin and stopped him dead in his tracks.

The native of the Republic of Congo followed it up with a nasty uppercut that sent Carpenter to the canvas and the referee wisely jumped in and saved Carpenter from further abuse.

M'Pumbu gives up about 20 pounds to his fellow light heavyweights but he doesn't fight like it. He will face Richard Hale in the finals of the inaugural Bellator light heavyweight tournament and the winner will be crowned the first Bellator 205-pound champion.

Bellator did something very smart, televising former middleweight finalist Jared Hess' comeback bout against Chris Bell which had occurred earlier in the evening on the undercard. If you don't remember, Hess suffered a gruesome knee injury last year to Alexander Shlemenko in the middleweight tournament semifinals.

Hess looked excellent, aggressively shooting for takedowns and wrapping that knee around his opponent's neck with a triangle choke, finishing the bout via submission inside two minutes. He will certainly be given an invite to the next Bellator middleweight tournament.

Lastly, the opening bout of the evening was an extremely entertaining scrap between two tough bantamweight prospects looking to make their mark.

Luiz Nogueira and Jerod Spoon both pushed a frenetic pace for three rounds, trading shot after shot in what was the most entertaining match of the evening.

Spoon landed some big right hands but it didn't make up for the volume of strikes that Nogueira was able to relentlessly connect with. The Brazilian pulled off a unanimous decision victory but both men would be a welcome addition to the next Bellator bantamweight tournament.

We'll have to wait and see.

Who stood out to you last night?

For complete Bellator 42 results and detailed round-by-round commentary of all the televised fights click here.