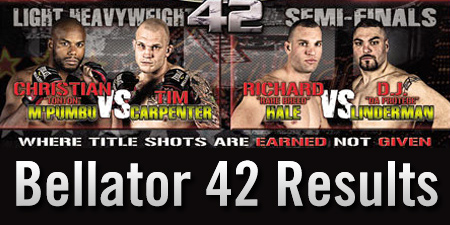 Bellator returns to the Sooner State TONIGHT (April 23, 2011) to host its forty-second event. The show will be held from Lucky Star Casino in Concho, Oklahoma.

Headlining the event, which airs live on MTV2 at 9 p.m. ET, will be the Bellator debut of British featherweight phenom Ronnie Mann as he takes on veteran Josh Arocho.

The Bellator light heavyweight tournament will hold its semifinals as well on the main card. Tough 205-pounders Richard Hale, D.J. Linderman, Christian M'Pumbu and Tim Carpenter are all vying to be the promotion's first light heavyweight champion. The $100,000 prize money probably isn't hurting either.

How will everyone fare?

Complete Bellator 42 results and play-by-play after the jump:

Round two: Spinning backfist connects from Linderman early and he picks Hale up in the clinch and dumps him on the canvas. Hale hops back to his feet and clinches against the cage. It looks like Hale landed an illegal knee and Linderman has five minutes to recover if he needs it. They reset and Hale lands a nice counter left hook. Both men exchange and Hale connects with a short left uppercut. Nice leg kicks from Hale. Spinning backfist misses from Linderman and Hale really going to town on Linderman's legs. Nice left counter again from Hale. Linderman is slowing down. I think the kicks are starting to have an effect. Just as I say that, Linderman explodes forward. Linderman lands clean with some nice inside hooks and follows it up with a lunging left hand that connects. Beautiful superman punch from Hale and both men exchange big blows. Head kick attempt from Linderman as the round concludes. 10-9 Linderman

Round three: Flying knee attempt by Hale to open things up. Linderman closes the distance and clinches with Hale against the fence, looking for the takedown. Hale sprawling effectively against the cage and he's got an underhook. Linderman drops down low but Hale circles away from danger. Linderman is really working for the takedown but Hale falls forward on top of Linderman into mount! Linderman gives up his back and Hale gets both hooks in! Hale is trying to sink in the rear naked choke and Linderman is trying to spin away from danger but Hale is glued to his back. Linderman really trying to escape but Hale refuses to be bucked off. Linderman turtles and tries to stand and Linderman turns into Hale but Hale keeps one leg wrapped around Linderman's back and he squirms his way to back mount again, dropping ground and pound until the final bell. 10-9 Hale. Great fight.

Round one: This is a special undercard feature fight since it ended quickly and Bellator has some extra time. Hess shoots in for a takedown early and gets it but Bell pops right back to his feet. Another takedown attempt from Hess is stuffed by Bell. Hess relentless pushes forward and clinches with Bell. Bell clinches and Hess looks for a guillotine but Bell pops his head free. Hess walks his legs up and locks in a triangle and he's got it! The submission is too tight and Bell taps out.

Round one: Arocho opens with a decent right hand. Both men stand in the center, looking to exchange. Mann lands a solid left hook and Arocho shoots in and scores a takedown. Mann uses a fantastic half guard sweep and completely reverses positions with Arocho. Mann postures up from full guard and drops some big elbows to Arocho's head. Mann throwing some really nice right hands from inside Arocho's guard. More ground and pound from Mann and he's opened up a small cut on Arocho's forehead. Mann not looking to pass Arocho's guard but he's doing plenty of damage inside it. Mann throws some big left elbows and right punches in combination. Arocho walks his legs up looking for a potential triangle but Mann shrugs it off and unloads with some more ground and pound. 10-9 Mann, maybe even 10-8

Round two: Both men stand early and Mann whiffs with a big head kick attempt. Arocho shoots for a double leg but Mann stuffs it easily and the American unwisely pulls guard. This is going to be three minutes of pain for Arocho I believe. Arocho if defending better this round on the ground and Mann tries to open up Arocho's defense with some strikes to the body. Mann lands some nice strikes to the head and Arocho's face is really busted up. His left and right eyes are swollen. This could be stopped between rounds. 10-9 Mann

Round three: Mann looks fresh while Arocho looks like he just got hit by a bus. Arocho shoots and Mann stuffs it, advancing to side control with a crucifix. Mann looks for a keylock but can't secure the submission. Mann steps over and looks like he's trying to score an inverted triangle on the ground but Arocho slips out. Mann traps an arm and drops some big strikes on Arocho's face. Nice left hands from Ronnie Mann from top and he's looking for another arm lock but gives up on it. Mann is content to pound away from half and full guard now. There's 30 seconds remaining and Arocho needs a miracle. Mann closes the fight with big ground and pound, fighting to the final bell. 10-8 Mann

Round one: Carpenter aggressive early, chasing M'Pumbu down. Nice inside thigh kicks from M'Pumbu as he backs away. Carpenter having a little trouble cutting off M'Pumbu along the cage. M'Pumbu lands a BIG right hand that buckles Carpenter and then follows it up with a tremendous right uppercut that drops Carpenter. The referee jumps in and saves Carpenter. Wow!

Final Result: Christian M'Pumbu defeats Tim Carpenter via TKO at 2:08 of Round 1

Round one: Both men cautiously feel each other out and Nogueira opens up with a quick flurry of punches but Spoon responds with a BIG right hands that wobbles him. Nogueira starts to lay into Spoon's leg with some outside and inside leg kicks and he follows up with a nice tight combination. Nogueira pins Spoon against the fence and lands a big combination and a flying knee, finishing it off with a big leg kick. Spoon trying to keep the distance with push kicks but he's mainly on defense. Nogueira shoots for a takedown and he gets it. Spoon turtles and gets back to his feet, avoiding a knee on the way up. Nogueira wades in with leg kicks and knocks Spoon down with a beautiful body kick. Spoon shoots for a takedown in the final 10 seconds and finally gets it with about two seconds left in the round. 10-9 Nogueira

Round two: Spoon opens up with a takedown attempt but Nogueira defends against the cage and punishes him with inside hooks. Spoon takes the center of the cage and throws a wild right hand that misses. Leg kick is caught by Nogueira and he presses forward aggressively. They clinch in the center of the cage and Spoon lands back to back solid left hand hands. Nogueira dropping his hands a bit now. Spoon lands another big right hand and Nogueira responds with an uppercut. Nogueira presses forward with a big combination and finishes it off with a kick. Nogueira clinches with Spoon, pressing the American against the cage. Spoon circles away and both men reset with two minutes left. Nogueira lands a solid left and Spoon flails wildly, missing with two big haymaker attempts. Another diving overhand right misses for Spoon and Nogueira answers with a 1-2 combination followed by a body kick. Both men trade in the center and Nogueira gets the better of it. Nogueira dives for a single leg and scores a takedown in the final 10 seconds and drops some nice ground and pound as the bell sounds. 10-9 Nogueira

Round three: Nogueira takes the center of the cage and stalks Spoon. Nogueira shoots for a single leg and Spoon initially stuffs it but Nogueira is relentless! He turns the corner and dumps Spoon on his back. Spoon works his way back to his feet but eats a big left hand in the clinch. Spoon dives forward with a right but Spoon answers with three straight punches and a big flying knee that grazes Spoon. For every punch Spoon throws, Nogueira is throwing four. Big leg kick from Nogueira. Nogueira pushes forward with a combination but Spoon shoots for a takedown. Spoon scores the takedown but Nogueira immediately explodes to his feet. Nogueira pins Spoon along the cage and presses the action. Takedown attempt from Spoon is stuffed. Nogueira shoots for a double leg and scores a takedown with 30 seconds left but Spoon turtles and gets back to his feet. Both men trade and Spoon lands a nice right hand before the final bell but it wasn't enough. 10-9 Nogueira.