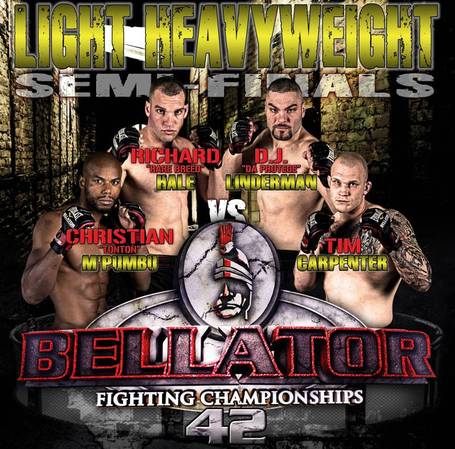 Bellator Fighting Championships will return to Oklahoma for the third time this year on Saturday night (April 23, 2011) at the Lucky Star Casino in Concho, OK, live on MTV2 for its forty-second event.

The main card will air live on the basic cable network beginning at 9 p.m. ET.

Recent Bellator acquisition, Ronnie Mann, the former Cage Rage and Shark Fights featherweight champion will be on display as he gets a tune-up fight against Josh Arocho before joining the next featherweight tournament.

The second round of the inaugural Bellator light heavyweight tournament will also be featured.

Christian M'Pumbu and Tim Carpenter as well as D.J. Linderman and Richard Hale will be competing to advance to the finals and potentially become Bellator's first 205-pound champion.

The event lost a bit of its luster when heavyweight champion Cole Konrad's opponent, Paul Buentello, backed out at the last minute with a back injury. Taking their place on the main card will be a special feature fight between some upstart bantamweight prospects.

Complete Bellator 42 preview and predictions after the jump

Christian M'Pumbu will be giving up some significant size once these men enter the cage but he wouldn't have it any other way. Despite practically being a weight class smaller than every other man in this tournament, he's been competitively fighting at light heavyweight for years.

M'Pumbu hails from France by way of the Republic of Congo in Africa and he is a well-rounded fighter. M'Pumbu went on a nice run in the M-1 Challenge and he's a finisher. All but three of his 16 career victories have been finished via submission or some form of knockout.

His opponent, Tim Carpenter is a fantastic grappler. You have to be one if you expect to defeat a Gracie on the ground, and that's exactly what Carpenter did in the opening round of the tournament. Carpenter even went for submissions against the much hyped Gracie, nearly finishing a few Kimura attempts.

In M'Pumbu's opening round fight, he was controlled by the bigger, stronger, Chris Davis but outlasted him and scored a TKO once Davis gassed in the final frame. Tim Carpenter will not gas and he is savvy enough on the ground to be able to control M'Pumbu and ride out a decision victory.

This tournament bout should be an entertaining scrap. Richard Hale grabbed everyone's attention nearly a month ago with his incredible inverted triangle choke finish against Xtreme Couture's Nik Fekete.

Hale is extremely well rounded, having a strong background in boxing and obviously, the submission acumen to even attempt something as ridiculous as an inverted triangle at light heavyweight and actually pull it off.

D.J. Linderman pulled the upset of the night in the first round when he put away tournament favorite Raphael Davis via TKO in round three. Linderman's game isn't very technical or flashy, he's a brawler with enough know-how to keep the fight standing.

He can take a punch too because Davis repeatedly crashed some Muay Thai knees into his skull and he kept coming forward.

Linderman wants to brawl but I have a gut feeling that we'll see another side of Richard Hale tomorrow night. He'll look to pick apart Linderman standing, especially when he lunges in with his wild hooks. I'm going with the "Rare Breed" on this one.

Make no bones about it, Bellator wants Ronnie Mann to not only win this fight, but to do it in highlight-reel fashion.

Ronnie Mann hails from England and he's fought all over the world. His only two losses were to British veteran Robbie Olivier and Japanese powerhouse Hatsu Hioki.

When looking at Mann's record, one would be shocked to find out he's only 24 years old. He's been fighting professionally for nearly eight years now and he's looking to add another title to his collection.

Mann is a very talented grappler with a strong Muay Thai base as well. He'll look to damage Arocho from the clinch or crush him on the canvas if the fight were to go to the ground.

Arocho enters the fight having lost four of his last six bouts. If he were to somehow pull off a victory, it would be a disaster for Bellator.

I'll stick with the common sense for this one.

This match between two bantamweight prospects was elevated to the main card after Cole Konrad's heavyweight "super-fight" with Paul Buentello was scrapped. Judging by the fan reaction to most of Konrad's fights, this was probably a benefit to the televised portion.

There's nothing more drastic than switching a bantamweight scrap in place of a heavyweight bout and these two young prospects might even be fighting for a chance to be in Bellator's next bantamweight tournament.

Neither Nogueira or Spoon have experience against top competition yet and this is a tremendous opportunity for both fighters.

Look for both of them to step it up and I'm actually picking this to be the most entertaining fight of the televised card. Both of these kids are finishers but Nogueira has faced a litany of Brazilians in his young career. I'm siding with the Brazilian scrapper on this one.

What are your picks for Saturday night's Bellator event?