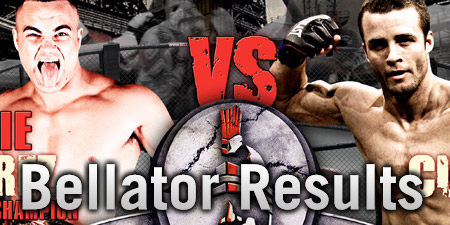 Bellator 39 marked the promotion's first season four trip to the northeast, as it returned to the Mohegun Sun resort and Casino in Uncasville, Connecticut last night (April 2, 2011).

Also on the card, Bellator's season four tournaments entered the semifinal stage as welterweights Rick Hawn and former champion Lyman Good squared off and in lightweight tournament action, veteran Toby Imada matched up against Patricky Freire for an opportunity to advance to the tournament finals and a shot at $100,000.

How did everyone fare?

Complete Bellator 39 results and play-by-play after the jump.

Round one: Curran takes the center of the cage and Alvarez throws out a pawing jab. Lightning quick right hand from Alvarez slips through Curran's defenses. Alvarez is circling Curran, moving quickly in and out, side to side. Curran finally throws a couple left hands and Alvarez loads up with a big left hook that misses. Curran connects with a leg kick and Alvarez drops down and takes Curran down with a single leg takedown. Curran immediately hops to his feet and Alvarez clinches him against the cage. Alvarez attempts another takedown and Curran lands a knee on the way out. Alvarez corners Curran and lets loose with his fists and both men throw a jumping knee simultaneously. Alvarez again catches a body kick from Curran and pushes him into the fence. Big right hand to the body connects from Alvarez and both men trade blows as the round ends. 10-9 Alvarez.

Round two: Curran stuffs an Alvarez takedown attempt early and throws a pushkick to create distance. Alvarez fakes a takedown attempt and lands a couple punches when Curran drops his defense. Alvarez pushes Curran into the fence and throws short knees into Curran's thigh. Alvarez throws a big combination as he backs away. After a brief exchange, Alvarez again clinches looking for an inside takedown but he can't get it. They separate and Alvarez connects two big body shots back to back. Curran keeps his defenses high and another 1-2 combination from Alvarez lands hard. Alvarez shoots for a takedown and eats a knee from Curran. Alvarez shakes it off and initiates a clinch against the cage until time expires. 10-9 Alvarez.

Round three: Alvarez opens aggressively, letting his hands go early. Curran side-steps an Alvarez takedown attempt and they reset in the center. Big right hook from Alvarez connects. Alvarez switches stances and sneaks a right jab through Curran's defense. Solid leg kicks from Curran dig deep into Alvarez's thigh. Alvarez changes levels and throws some big uppercuts that might have poked through Curran's high guard. Alvarez shoots for a takedown but Curran stuffs it. Big left uppercut from Alvarez connects hard on Curran's stomach. Alvarez opens up with more body shots and Curran finally lowers his guard enough for Alvarez to take him down. Curran fights his way back to his feet and Alvarez backs away. More body shots from Alvarez connect and he's really starting to hurt Curran's body. 10-9 Alvarez.

Round four: More uppercuts to the body from Alvarez to get things started and he follows it up with a right hook to Curran's head. Alvarez clinches and throws a combination on the way out. More big combinations from Alvarez and he tags Curran's body again. Alvarez turns up the heat and lunges in with more punches to the body. Curran's organs have to be jelly by now. Curran throws a couple body kicks and follows them up with a push kick. Alvarez dancing around Curran now and both men trade strikes. Alvarez triples up with left jabs to Curran's face and takes him down for the final ten seconds of the round. 10-9 Alvarez.

Round five: Alvarez scores a quick takedown early and Curran pops right back to his feet. Another big fight hook to the body from Alvarez and he keeps up the pressure going high. Alvarez resets and commands Curran to fight him. Curran seems content to play defense and let time expire. Alvarez toying with Curran now. Alvarez lets go with his hands and throws big left and right hooks from each hip. Curran is showing no sense of urgency here. Alvarez throws a flying knee and drops down for a single let takedown attempt but Curran shrugs it off. Alvarez wings a big punch and Curran responds with a 1-2 combo. Huge uppercut from Alvarez connects and he presses the action. Alvarez wants a finish. Alvarez hops in the center of the cage and shoots for a takedown but Curran reverses him and lands on top. Curran throws some ground and pound and Alvarez gets back to his feet as both men trade punches until the final bell. 10-9 Alvarez and I've got it scored 50-45 for Eddie Alvarez overall.

Round one: Both men feel each other out for nearly a minute and Hawn rushes forward, closing the distance and pressing Good against the fence in the clinch. Good throws a few knees and Hawn backs off. Good throws a snapping left jab that catches Hawn. A couple more jabs land and Good connects with a solid uppercut as Hawn drops his head. Hawn again clinches pressing Good against the cage and Hawn throws a short right hand followed by a knee. Good circles out and throws a head kick which Hawn blocks. Leg kick lands by Hawn and he whiffs with a big left head kick as time expires. 10-9 Good.

Round two: Good starts strong with a charging flurry of punches and Hawn clasps onto him and trips him to the canvas. Hawn is deep in Good's closed guard. Hawn stands and Good throws an up-kick which makes Hawn reconsider. Hawn dives back into Good's guard and Good isn't offering much from his back. Hawn isn't very active either, content to throw occasional punches from Good's full guard. Hawn starts to open up with a couple big punches to Good's body and head. Hawn remains on top until the round ends. 10-9 Hawn.

Round three: Hawn presses forward and Good circles away to his right. Leg kick lands for Hawn and Good responds with a short combination of punches. Hawn jumps in with a right hand that Good avoids. Good tags Hawn with a couple left jabs and Hawn, the Judo Olympian clinches Good against the cage. Hawn backs away and throws a leg kick and Good catches it, countering with a short combination. Head kick from Good is blocked by Hawn and Hawn clinches again against the cage. Good pushes him away and they reset in the center. Good continues to throw his jab and it's landing nearly every time. Hawn throws a leg kick/backfist combination that misses and then clinches Good against the fence. Hawn scores a takedown with ten seconds left and throws big punches to try to steal the round as Good retaliates with up-kicks. Very tough to call but I'm leaning 10-9 Good. It could go either way though.

Round one: Both men posture early and Pitbull throws two inside leg kicks. A leg kick by Imada is countered with a straight right hand from Pitbull that connects flush. Big snapping kick digs deep into Imada's leg. Freire closes the distance and throws a heavy body kick. Out of nowhere Pitbull throws a CRUSHING FLYING KNEE! Imada is out on his feet and a quick 1-2 punch combination followed by left hook from Freire drop Imada and he's out cold! WOW!

Round one: Saunders throws back to back body kicks and follows it up with a left head kick. Saunders counters a Lee straight right with a flurry pushing forward and a flying knee. Saunders puts Lee in the Muay Thai plum and starts throwing some crushing knees to the body. Big right hand lands for Saunders and he's got Lee in the clinch again throwing more knees to the body. Lee defends with a body-lock and they separate. Flying knee by Saunders and a lunging elbow connects along the fence as Saunders clinches. Saunders throws knees to the body and they separate. Saunders pushes forwards with a big flurry and he stuns Lee, landing big elbows and, you guessed it, more knees until the bell sounds. 10-9 Saunders.

Round two: Saunders opens up with a short elbow and a big head kick that connects. Credit Lee's toughness but he's just a glorified punching bag right now. Straight left hand lands for Saunders and Lee throws a low blow as he wades in. After the reset, Saunders clinches throwing more knees. Lee drops down for a takedown but Saunders blocks it and both men throw leather in the center of the cage. Saunders throws some massive elbows along the fence and Lee is bleeding all over the place. Saunders keeps the elbows going all the way to the bell. 10-9 Saunders.

Round three: Wow, Lee's corner talked the ringside officials into allowing him to continue. He's got a lot of heart. Saunders initiates a clinch and unleashes a barrage of short elbows to the head and knees to the body. An elbow from Saunders opens up a massive cut on Lee's face and this fight is going to be stopped for sure now. The cage-side physician calls a halt to the fight and Ben Saunders wins by TKO.