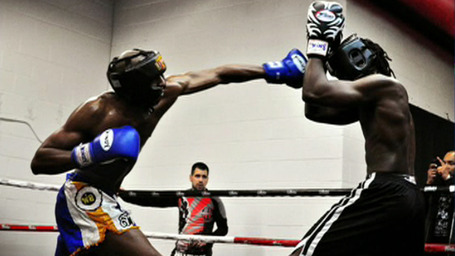 Amateur Canadian mixed martial artist, Kearn Nedd, was killed Saturday afternoon (April 16, 2011) while attempting to foil a robbery at a charity poker game at the Rozz Restaurant and Entertainment Complex in Brampton, Ontario.

According to published reports, two men burst into the banquet hall with guns. Nedd was fatally wounded while scuffling with one of the would-be robbers.

He would later succumb to his injuries at a local hospital.

Nedd trained with the Scott Lewis Brazilian Jiu-Jitsu Team as well as Kombat Arts in Mississauga and held a 1-1 record as an amateur. He fought as a welterweight and was slated to make his pro debut next month. His fight team, Kombat Arts, has a heartfelt blog posted in his memory.

A witness said there were 150 people at the hall for a charity poker game. The facility is located near the intersection of Highway 407 and Dixie Road.

The victim was reportedly shot after a scuffle with one of the gunmen. Three bullet holes could be seen on the banquet hall's doors.

The victim's distraught friends said that Nedd was a Good Samaritan who tried to help, but ended up having his life taken away.

Just over three weeks ago, UFC light heavyweight Jon Jones made headlines when he foiled a robbery attempt mere hours before winning the 205-pound title at UFC 128 in Newark, NJ.

Nedd's tale is a chilling reminder of the tragic side of being a Good Samaritan and our thoughts and prayers are with his family during this difficult time.