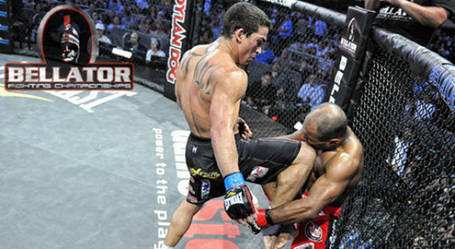 Bellator 41 has concluded from the Cocopah Resort and Casino in Yuma, AZ last night (April 16, 2011). A night that should have been celebrated for its fantastic last-minute finishes and entertaining scraps was sadly marred by a terrible decision in the main event.

All eyes were on MTV2 as Bellator was flying solo on Saturday night with no MMA alternatives.

Bellator Featherweight Champion Joe Warren was cutting down to 137-pounds for a major test. Warren had big aspirations of holding two titles in the promotion but he may have taken his opponent, WEC veteran Marcos Galvao, way too lightly.

Galvao stuffed all of Warren's takedowns in the first round, even landing on top during a few throw attempts and was competitive in the striking portion.

The Brazilian jiu-jitsu (BJJ) black belt dominated in the second, connecting with multiple flying knees to Warren's freakishly resilient skull but Galvao coasted in the third round and allowed the champ to take him down and pound from his guard for five straight minutes.

It was a decision that would cost Galvao the fight.

The judges inexplicably awarded Warren a unanimous decision. One incompetent judge even scored the bout 30-27 for the champ. How he saw the second round for Warren is beyond me. Regardless, Galvao not winning the fight on even one judge's scorecard is a travesty.

A takedown in the final 10 seconds of a round should NOT be scored higher than a takedown or dominant position earlier. I'm a firm believer that the criteria for scoring a fight needs to be more clearly defined.

Thankfully, the other three main card fights were fantastic, all of them ending with exciting third round finishes.

The "Fight of the Night" was definitely the flashy super-fight between Bellator Bantamweight Champion Zach Makovsky and undefeated Texan, Chad Robichaux.

Makovsky's pace, pressure and aggression were simply too much for "Robo." The bout featured multiple sweeps and fantastic reversals in one of the most entertaining ground battles of 2011.

The champion slickly passed Robichaux's guard during every takedown attempt in a brilliant bit of game-planning which helped him easily avoid the BJJ black belt's guillotine choke attempts. Robichaux, though, showed tremendous resilience, gutting his way out of multiple submission attempts from Makovsky.

By the third round, Makovsky had finally worn the Texan down and after repeated blows to the head from back mount, the referee awarded "Fun Size" the first technical knockout victory of his career.

Makovsky had decisioned his way through the Bellator season three bantamweight tournament to initially win the title and this was just the type of performance he needed to elevate him into the realm of Bellator's other stars.

After a very even first two rounds primarily spent in the clinch, Patricio "Pitbull" Freire began to connect repeatedly against three-time tournament semifinalist Wilson Reis. Reis began to falter and "Pitbull" turned up the heat, crushing Reis with precise technical power punches. WIlson couldn't weather the ferocious flurry and he slumped into a heap against the cage, the first time he'd ever been stopped in his career.

Patricio Freire will now join his brother, Patricky, as a finalist in a Bellator season four tournament. The "Pitbull" brothers are quickly becoming stars in the promotion, having scored four highlight-reel knockouts in the past five weeks.

Lastly, in the opening bout of the evening, Daniel Straus kept his torrid MMA streak alive. He thoroughly outworked Kenny Foster from the clinch, on the ground and standing.

Despite winning the first two rounds and being in a position to ride out a decision victory, Straus mounted Foster along the fence and forced "The Tooth Fairy" to tap out to a guillotine choke late in the third round.

It was a decision that likely earned the Cincinnati native a large contingent of new fans as he has now won 12 straight fights.

I'm very, very excited to see Straus step into the cage against Patricio "Pitbull" for the tournament finals. With Warren looking vulnerable against Galvao, the winner of this year's featherweight tournament has a very real chance of dethroning the champion.

For complete Bellator 41 results and detailed round-by-round commentary of all the televised fights click here.