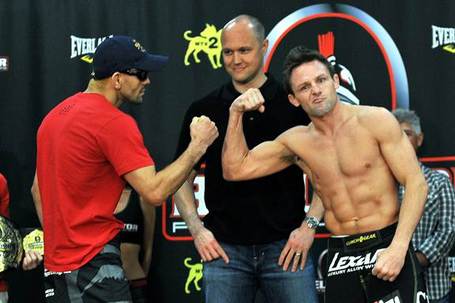 The official weigh-in event for Bellator 41 have concluded in advance of tomorrow night's card, which airs live on MTV2 at 9 p.m. ET, in Yuma, Arizona.

Of the 14 fighters who weighed in, 13 successfully made weight. Bellator featherweight semifinalist Patricio Freire came in 0.2-pounds overweight and will have two hours to sweat it off. Preliminary card fighters Michael Parker and Anthony Birchak were dealing with the commission and were not able to weigh in during the live stream.

Also on the card, Daniel Straus and Kenny Foster will square off in featherweight tournament semifinal action, as well as a rematch between Bellator veterans Patricio "Pitbull" Freire and Wilson Reis.

Complete Bellator 41 weigh in results after the jump.

*Freire eventually weighed in at 148.8 lbs.
**Birchak and Parker weighed in successfully after the Bellator live stream ended.

It's going to be a great night of fights so don't miss it, and remember to check us out for all the post-fight coverage after tomorrow night's card is wrapped up.