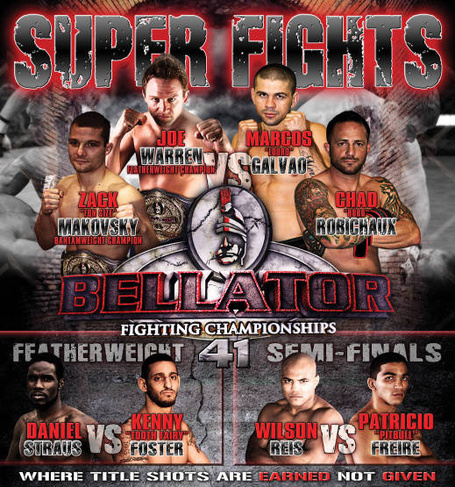 Bellator Fighting Championships will head to the Southwest this Saturday night (April 16, 2011) at the Cocopah Resort and Casino in Yuma, Arizona, live on MTV2 for its forty-first event.

The main card will air live on the basic cable network beginning at 9 p.m. ET.

Of course, Bellator is founded on a tournament structure and its featherweight tourney will continue as well. Patricio "Pitbull" Freire will rematch Wilson Reis and Kenny "The Tooth Fairy" Foster will battle Daniel Straus for an opportunity to advance to the finals.

Complete Bellator 41 preview and predictions after the jump.

On top of defending his featherweight title in 2011, Joe Warren plans on competing in the Bellator bantamweight tournament later this year and winning his second title in the promotion. Fighting in a 137 lbs. catchweight is simply a test to see how well the champion will adapt to the lower weight class.

Warren burst onto the scene in the 2009 Dream featherweight grand prix, defeating former WEC champion Chase Beebe and Japanese legend Kid Yamamoto in the first two rounds of the tournament.

Did I mention those were his first two professional fights?

The Olympic hopeful Greco-Roman wrestler had an incredible 2010, winning four consecutive Bellator fights and capping it off with a knockout victory over champion Joe Soto to win the featherweight title.

His opponent, Marcos Galvão, is a well respected Brazilian jiu-jitsu artist. The Vitor Ribeiro teammate was unsuccessful during his first stint in the big show, losing consecutive WEC fights by knockout to bantamweight powerhouses Brian Bowles and Demacio Page respectively.

Since leaving the WEC, the Brazilian has reeled off three straight wins over lesser competition. He's got a chip on his shoulder and despite being a huge underdog on Saturday night, he's ready to "shock a lot of people."

Obviously, Warren will have the wrestling edge in this fight.

He's adapted his Greco-Roman skills beautifully to MMA, throwing opponents like rag dolls all over the cage. The self-proclaimed "Baddest Man on the Planet" has shown improvement in his overall MMA skills in recent fights and after back-to-back improbably comeback victories, he can never be counted out of a fight when he's in trouble.

After the first stoppage victory of his career, don't be surprised if Warren stands a bit with Galvão. The Brazilian has been prone to the knockout in the past. Also, at 137-pounds, the American will expect to have a significant size and strength advantage over his opponent and he won't be hesitant to display it.

Oddly, though, despite holding a black belt in BJJ, the Brazilian has never submitted an opponent. Warren doesn't exactly possess technical escapes from submissions, but he's probably big and strong enough to power out of anything Galvão can throw at him.

"Fun Size" steamrolled his way through the Bellator season three bantamweight tournament with his dominant wrestling and top control. No one could hang with the Division 1 wrestler out of Drexel University when the fight went to the ground.

True to his nickname, Makovsky is a compact fighter with few weaknesses. He's been working with Bellator featherweight standout Wilson Reis to prepare for Robichaux's fluent submission skills.

Chad Robichaux has been fighting off and on in MMA since 1999. He won the first 10 fights of his career via submission, ending every bout within the first two rounds. He finally went the distance in his last fight, a split decision victory against Humberto DeLeon. "Robo" did not enjoy going the full 15 minutes and he's going to do everything in his power to end this fight within the allotted three rounds.

This match is almost guaranteed to go to the ground.

In my eyes, whoever can find their way on top will win the fight, either via submission or decision. In our interview with Robichaux, he mentioned preparing for Makovsky by grappling with NFL defensive lineman Brian Robison, a man more than twice his size. Robichaux will likely be the more composed man off his back and considerably more dangerous.

I feel Zach Makovsky is the most beatable of the Bellator champions and Chad Robichaux poses the most significant threat to them in a super-fight yet. "Fun Size" has lost two fights via submission, this could very well be the third.

This is my upset special.

Both Straus and Foster put on a hell of a show in the first round of the Bellator featherweight tournament. Straus scored a decision victory against 19-0 Nazareno Malegarie in a 2011 fight of the year candidate while Foster crushed tournament favorite and undefeated national champion wrestler Eric Larkin via first round guillotine choke.

On paper, Straus should hold the advantage.

Foster, nicknamed "The Tooth Fairy" for knocking out his opponent's teeth, showed excellent reflexes in his last fight with Eric Larkin. He timed the four-time All-American's first takedown attempt beautifully and crushed him in the face with a kick that opened up a large cut.

Foster even surprised the Arizona State standout with a takedown of his own before finishing the fight. He's tenacious and is heading into this fight with a lot of confidence.

Straus is a great fighter, but his biggest weakness is his lack of finishing ability. Nine of his fifteen career wins have come by way of decision. While Straus should be able to control Foster and wear him down over the course of three rounds, he's going to give "The Tooth Fairy" an opportunity to add a few incisors to his collection in the process.

I was actually very surprised when Bellator announced this match-up. Patricio Pitbull and Wilson Reis both met each other in the exact same round last year in the Bellator season two featherweight tournament.

Despite their excellent grappling credentials, Freire would go on to defeat Reis in what would primarily be a kickboxing match.

Wilson Reis has been a staple of the Bellator featherweight tournament. This is his third time making it to the semifinals but he has never advanced to the finals. The Philadelphia-based grappler showed a sense of urgency in the first round, rocking Zac George standing and finishing him via rear naked choke in just over two minutes.

He will need that same mind-set to defeat Pitbull tomorrow night.

Freire, like his brother Patricky, wants to advance to the finals of his tournament. Patricio was a finalist last year and despite crushing eventual champion Joe Warren in the first round, he faded and lost a decision. Pitbull is out for revenge this year and proved it by handing season two standout Georgi Karakhanyan the first TKO loss of his career in his quarterfinal match.

Both men are fantastic submission experts but they also love to stand and bang. Don't be surprised if this bout is almost exactly the same as their first fight last year.

What are your picks for Saturday night's Bellator event?