Share All sharing options for: Jon Jones and Rashad Evans 'aren't real training partners' like Nick Diaz and his boyz 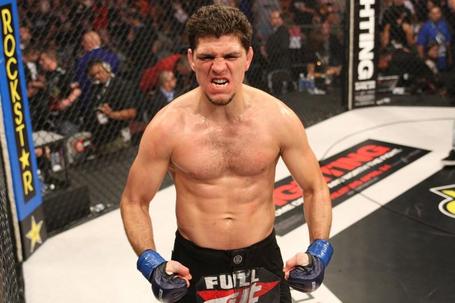 Don't ever try to come between him and his "family."

Diaz -- who recently dispatched of the dangerous Evangelista Santos via second round submission in his most recent performance earlier this year -- now faces probably the stiffest competition the promotion currently has to offer in its not-so-top-heavy welterweight division.

And if anyone has the power to stop Diaz, it's definitely "Semtex."

But if the foul-mouthed fight monger can get past the British bomber on fight night, will he be riding the bench until the UFC can send for reinforcements? Or will Strikeforce rush one of its 170-pound prospects onto the front lines to keep its top star satiated?

Wherever the talent comes from, it certainly won't be the "209," because Diaz isn't letting the precedent set by UFC light heavyweights Jon Jones and Rashad Evans change his position on fighting teammates.

"They're not real training partners," Diaz remarked during yesterday's media conference call. "They're like 10 years apart. They didn't grow up training together. And [Jones] is just brand new into this sport. They've got him so busy making photo shoots and press conference and conference calls and all that. It's more than training partners. We're a family. It's just not right. And if you're offering me $10 million to fight my boy, then I'm sure somebody's going to offer me $8 million to fight somebody else."

Diaz has been on an absolute tear the last five years, winning 13 of 15 fights, which includes a sensational submission win over Pride FC champion, Takanori Gomi, which was later ruled a "No Contest" because he was found to have marijuana coursing through his veins.

The fiery Stockton, Calif., native recently avenged his only loss during that span, a referee stoppage because of cuts caused by KJ Noons back in 2007, by beating the professional boxer at his own game en route to an impressive unanimous decision victory.

After cruising past "Cyborg" the only thing that stands between him and an empty division is Daley, who recently notched another brutal knockout by cold-cocking DEEP welterweight Yuya Shirai with a vicious left uppercut, hook combination in the BAMMA 5 main event on Feb. 26 in England.

It was supposed to be a five-round fight for the promotion's vacant welterweight belt, but Daley came in heavy at the weigh ins, relegating the contest to a three-round, non-title affair.

He made up for the transgression, which is one of many scale-related miscalculations throughout his exciting mixed martial arts career, with the early finish, but Scott Coker and Co. need to be concerned that the brash Brit hits his 170-pound mark on April 8.

"Semtex" is currently enjoying a four-fight win streak since his release from the UFC last year after landing a cheap shot after the bell in a frustrating loss to Josh Koscheck. He's cocky and confident now so more than ever, and he'll look to extend his knockout win streak to three when he locks horns with Diaz.

Rest assured that Diaz will likely give him every opportunity to land a big punch, or several, because he's not scared to throwdown with anyone, homie. How long a strategy like that will work against a power-punching knockout artist like Daley, however, is anyone's guess.

For more quotes and highlights from the Strikeforce: "Diaz vs. Daley" media conference call click here.