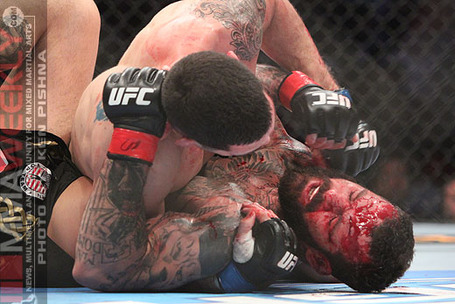 Last night (March 3) at UFC on Versus 3, American Top Team middleweight Alessio Sakara returned to action after a year long layoff, while Chris Weidman made his debut inside the Octagon.

Despite a strong start from "Legionarius," it was the former NCAA All-American wrestler who managed to bounce back to capture the next two rounds and win the unanimous decision.

The fight was essentially a grappling match turned bloodbath, as Weidman landed many a sharp elbow that opened up his foe and had him bleeding all over the canvas.

Sakara was in top form early, as he was landing devastating combination's to the body and head of his opponent. Weidman's takedowns in the opening round were predictable at best and Sakara was able to stuff every single one of them. However, Weidman did manage to do some damage, as he opened up a cut over Sakara's eye.

In the second round, the All-American finally found success with his shot and that was the turning point. A few elbows from top position and Sakara's face continued to get bloodier and bloodier. Weidman controlled the action the rest of the way, his coming out party complete.

The judges scored the fight a unanimous decision in favor of Weidman (30-27, 30-27, 30-27) apparently not looking so favorably on Sakara's early stand-up successes.

"I'm so happy," said Weidman. "I want to thank the UFC for the opportunity."

Is there finally some new blood in the middleweight division? Maybe, maybe not. But a 5-0 record and a win over a game veteran goes a long way in proving a young fighter's worth.

As for Sakara, that three-fight win streak is up in smoke and it drops him to just 6-5 in 11 career trips to the Octagon.

For complete UFC on Versus 3 results and blow-by-blow coverage of the main card action click here and here.