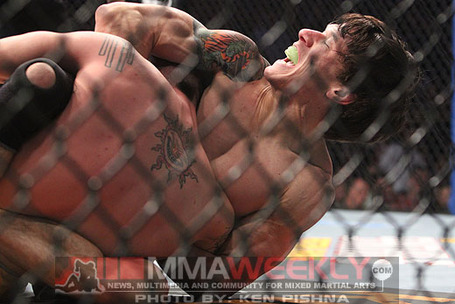 After almost a year away from the cage, former WEC Bantamweight Champion Brian Bowles met the hard-nosed Greg Jackson fighter Damacio Page in a rematch at UFC on Versus 3.

And as soon as the opening bell sounded, they wasted no time going to war.

But as the old saying goes, those that do not learn from the past are doomed to repeat it.

And so it went, as Bowles submitted Page with a guillotine choke at precisely the same time he did in their first meeting at WEC 35.

Page opened up like a house on fire, clearly out for revenge, throwing some hard leg kicks. Bowles would weather the storm however, eventually getting the fight to the mat where he was playing with a loaded deck. Sure enough, he wasted no time in submitting Page with another guillotine choke.

Bowles managed to submit Page precisely 3:30 into the first round, as noted previously, the same as the first meeting. That was enough to earn him "Submission of the Night" honors, which came with a hefty $40,000 bonus.

The WEC merger with the UFC is good, indeed.

"I fought him before, he hits hard," Bowles said after the bout. "I know he comes out aggressive, I was kind of expecting that from him. I was able to use my footwork last time and I tried to do the same this time."

According to Bowles, the guillotine choke is his go to move; something his future opponents would be smart to learn from, unlike Page.

"That's my signature move. I hit it all the time in the gym and I work on it a lot. He was out for a second. I didn't want to keep holding on and hurt him."

For complete UFC on Versus 3 results and blow-by-blow coverage of the main card action click here and here.