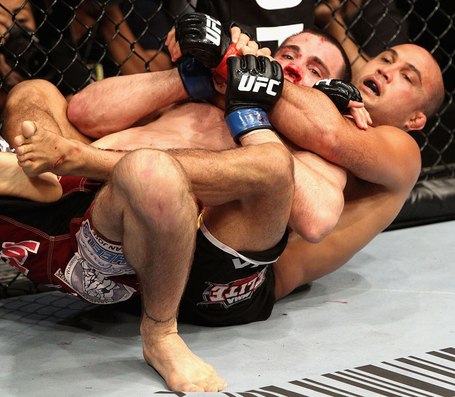 Lately there's been a tremendous amount of debate within the mixed martial arts (MMA) community as to whether the current unified rules favors wrestling over any other type of discipline. As a result, I started to pick my brain as to why fans are so quick to blame the fighter in top position when a fight hits the ground and the pace slows to a crawl without really faulting the fighter on the bottom.

Sure, the current rules seem to favor the takedown and top control, but that doesn’t mean that once you're on your back you've lost. In fact, that couldn’t be further from the truth.

The fight has only just begun.

I recognize that not a lot of casual fans are excited when a "stand-n-bang" fight suddenly hits the ground like it did this past Saturday night (March 26) in the co-main event between Anthony Johnson and Dan Hardy at UFC Fight Night 24, but it is our job as "hardcore" fans to further educate the masses when it comes to fully understanding the intricacies of the sport.

And it's the fighter’s responsibility to give us something to eductae them on.

When you're a very good wrestler with a clear advantage in size, strength and wrestling, it would be foolish of you not to work towards your advantages and take the fight to the ground. When game-planning against someone who has those advantages (and you don't), it is irresponsible of you not to incorporate takedown defense and offensive grappling in preparation for the inevitable takedowns.

Regardless of what's promised or what's said in pre-fight hype videos, especially in the instance of Hardy vs. Johnson, it would be silly to think that Johnson would be willing to stand in the pocket with a very good counter striker and not once think about a takedown.

With a wrestling background you instinctively have that on your mind and when facing someone who relies heavily on the 10th Planet Jiu Jitsu System, what better gameplan than to take the fight to the mat?

But getting taken down shouldn’t signify the end of the fight. The fighter on bottom is just as dangerous as the guy on top -- IF he knows how to attack offensively instead of conceding to working defensively.

Is it fair to blame Anthony Johnson for taking his fight to the ground?

When a smaller, weaker opponent attempts a standing kimura and you're able to easily use your weight and strength to put him on the mat, then why not do so? And once it hits the ground, Hardy concedes to Johnson any and all hope of getting back up.

One of the most important aspects of jiu-jitsu and grappling as a whole is leverage.

The next time you're tempted to start booing or become frustrated with a wrestler doing what he does best, start blaming the bottom guy a little more for little-to-no activity. Fighting in the big leagues means you will be fighting the best in the world and you won't get away with just knowing how to strike and work from top position.

The bottom game has seemingly being forgotten!

For all the talk of "Shogun" Rua having a world class guard, he failed to show it against Jon Jones at UFC 128 back on March 19. While I'll give him the benefit of the doubt from being rocked early in the fight, he did little to defend or attack his opponent from the bottom position.

In both clips (above) he is flat on his back and not looking for wrist control or for any sort of posture control with a closed guard or over/underhooks.

He allowed "Bones" to throw his leg over in what should have been an easy sweep or submission attempt.

The reason Rua was not able to capitalize is attributed to his cardio but also his lack of comfort on the ground. Being able to do such a transition is not an indicator as to how good Jones is, but more of how lazy the Brazilian's ground game was.

"Shogun" was very unimpressive from the bottom.

Notice above that Anderson Silva is not flat on his back while Rich Franklin attacks him from the top. He doesn’t roll for a kneebar and he doesn’t do anything to leave him too vulnerable. Instead, he makes it difficult for "Ace" to get too many shots in and when he gets comfortable, Anderson gives a subtle sweep of his foot and throws Franklin off balance which creates a scramble and allows the dominant striker to get back to where he performs best.

That is a very overlooked technique; as all Anderson does is keep his legs and arms active and never lays flat on his back. Instead, he is at an angle where he can fully use the strength of his hips and legs to do something as simple as trip Franklin down.

A powerhouse wrestler on top, controlling position. It must be the end right?

Carlos Eduardo Rocha, who is a very accomplished jiu-jitsu player, sees light in the darkness underneath an accomplished wrestler like Jake Ellenberger. Instead of allowing the stronger Ellenberger to hold position, Rocha attacks from a defensive position. Rocha uses the power in his hips through beautiful technique to lock in a Kimura from underneath to roll over Ellenberger and gain dominant top position.

Rocha also uses upper body strength to compliment his momentum and hip rotation in the sweep. Ellenberger, as a wrestler, may have gotten too comfortable on the ground and was thrown off his base and his wrestling talent was negated completely.

Before anyone laughs at the thought of Brock Lesnar completing sweeps and attacking from his back, let me just stop you there. Watch the GIFs above as he actually demonstrates very effective technique.

Notice a few things, like when Brock is sweeping in these clips. He has an awesome base where his hips are angled and he isn’t flat. He also has very active legs. He takes his brute strength and combines it with some very good technique.

The best wrestler in all of MMA has dominant position and Penn is able to work back towards full guard where he can attack more and defend easier. He does so by remaining active underneath a guy who has a near flawless base.

While Georges St. Pierre lays stationary across Penn’s body, "The Prodigy" works in the wiggle room he needs to secure his left leg in the crotch area of the champ. When he hooks his foot in the thigh area he pushes off, rotates his hips and slides his body underneath, placing him securely in full guard.

This sweep is known as the "jailbreak."

There are plenty of techniques to compliment a bottom grappler’s arsenal, but that's up to the fighter to learn and experiment with. But the next time you're watching a fight and a top positional wrestler is riding out a fight and securing top control, resist the urge to immediately bash him.

Don't forget there are two fighters in the cage and the bottom fighter has plenty of opportunities to attack.

Let’s hear it Maniacs, do you think the fighter on bottom needs to do more to prevent the top fighter from riding to a decision? Or will you boo the stalled action regardless?