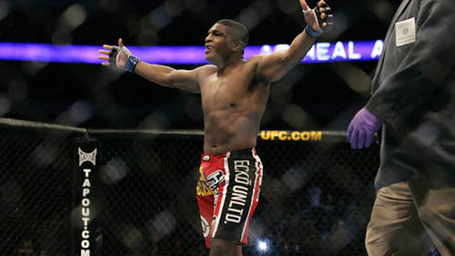 Strikeforce welterweight number one contender Paul Daley wants to earn a higher salary -- probably to make up for the money he keeps giving away in fines every time he misses weight.

It was supposed to be a five-round fight for the promotion's vacant welterweight belt, but Daley came in heavy at the weigh ins, relegating the contest to a three-round, non-title affair.

"Semtex" made up for the transgression, which is one of many scale-related miscalculations throughout his exciting mixed martial arts career, with the early finish, but Scott Coker and Co. need to be concerned that the brash Brit hits his 170-pound mark in April.

That's because he's been booked to challenge Nick Diaz for the promotion's 170-pound title at the upcoming Strikeforce: "Diaz vs. Daley" event at the Valley View Casino Center in San Diego, Calif., on April 9.

And Daley hopes that stopping Diaz in front of a Showtime audience will put him in line for bigger and better opportunities.

From his pre-fight blog (via This is Nottingham):

"Diaz says he doesn't fear my striking. He's an awkward boxer and he can punch but he's never been hit by anyone like me. He says he's got a granite chin. I hope he has, because he's going to need it. I've been trying to wind Diaz up ahead of the fight in San Diego on April 9 but he's not biting. So I'll probably leave it now until we come face-to-face at the press conference. People keep asking me what I think about Strikeforce being taken over by the UFC and my old mate Dana White. To be honest, I don't care about Dana white. But I am disappointed because Strikeforce were the main competition to the UFC on the international stage. Having said that, it doesn't affect me all that much because I've got a contract and they have to honor it. And, after I stop Diaz in his tracks, I'll have even more bargaining power. He got 150k for his last fight which means I can ask for more money when I beat him – but that doesn't mean I'll get it!"

"Semtex" is currently enjoying a four-fight win streak since his release from the UFC last year after landing a cheap shot after the bell in a frustrating loss to Josh Koscheck. He's cocky and confident now so more than ever, and he'll look to extend his knockout win streak to three when he locks horns with Diaz.

Rest assured that Diaz will likely give him every opportunity to land a big punch, or several, because he's not scared to throwdown with anyone, homie. How long a strategy like that will work against a power-punching knockout artist like Daley, however, is anyone's guess.

Nick Diaz vs. Paul Daley on April 9 in San Diego.