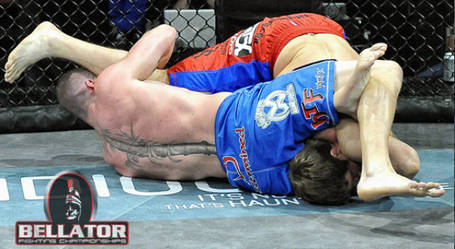 Kicking off the evening was former Marine Chris "The Professional" Davis and Christian "Tonton" M'Pumbu. Both fighters put their technical ability on display in the back and forth fight, but it was M'Pumbu who was able to turn it up late in the third round. M'Pumbu trapped Davis between his knees, landing crushing unanswered hooks to Davis' head, forcing the referee to step in and award M'Pumbu a TKO victory.

The second quarterfinal of the evening saw Richard Hale taking on Nik Fekete. Fekete looked to rely on his wrestling skills early with a double leg takedown, but quickly found himself in a compromised position as the 6'4" Hale hung off his opponent's back, locking in an inverted triangle choke with Fekete still standing.

In a déjà vu moment that would make Toby Imada proud, Fekete dropped to his stomach, losing consciousness from Hale's Submission of the Year candidate inverted triangle choke. Check it out here.

D.J Linderman took on submission specialist Raphael Davis in quarterfinal action at Bellator 38. In a fight that moved from both the feet to the ground, it was Linderman who won the stand up battle, frequently finding a home for his heavy left hand. Late in the third round it was apparent that the damage to Davis had accumulated as Linderman forced him to his knees with a jarring left hook, the referee had seen enough, awarding Linderman an amazing third round TKO upset victory.

Jiu-Jitsu legend Daniel Gracie met an undefeated Tim Carpenter in the final Light Heavyweight quarterfinal fight of the evening. Carpenter surprisingly dominated both the Jiu-Jitsu and standup battle throughout the fight. Gracie found his legs late in the second round but his efforts were not enough as the fight went to the judge's cards, whom ultimately awarded Carpenter a split decision victory and a spot in the Season 4 Light Heavyweight Tournament semifinals.

"I was hugely impressed with our Light Heavyweights tonight, I never would have imagined that we would see another inverted triangle, from a 6'4" Light Heavyweight," said Bellator Chairman and CEO Bjorn Rebney. "We're on a roll - I'm proud to say that we've strung together three back to back world-class, spectacular events, I couldn't be happier."