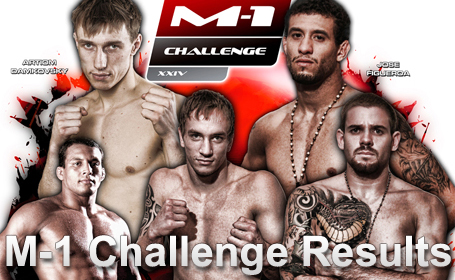 M-1 Challenge made its Showtime debut TONIGHT (March 25, 2011) when it bought "Damkovsky vs. Figueroa" to the cable television network from the Constant Center in Norfolk, VA.

And how did they all fare?

Complete M-1 Challenge results and play-by-play after the jump.

Round one:  Figueroa takes command of the center of the cage and Damkovsky opens with a solid leg kick to get things started. Body kick from Damkovsky followed by a leg kick. He's really working his kicks early. Damkovsky starts working his punches and Figueroa shoots for a takedown but is stuffed. Leg kick from Damkovsky is countered by a Figueroa punch. Figueroa shoots for a takedown and lands in top position with Damkovsky turtled up. Damvosky uses an underhook to get back to his feet and eats a big low kick from Figueroa. Damkovsky responds with a 1-2 combination and some leg kicks. Damkovsky leaps forward with a flying knee and both men exchange in the center of the ring. Big head kick from Figueroa and Damkovsky catches the end of it. Damkovsky closes the distance with a superman punch but Figueroa takes him down and lands in his guard with a minute to work. Figueroa postures up and drops some nice left hands and Damkovsky is bloodied up. Nice ground and pound from Figueroa to finish the round and it was enough to take the round in my eyes. 10-9 Figueroa

Round two: Damkovsky opens with a beautiful straight left that snaps Figueroa's head back. Big flying knee from Figueroa and Damkovsky chops his leg out from under him.  Figueroa dives for a takedown and he gets it.  Figueroa is using his reach advantage to land some big ground and pound from full guard. Figueroa passes to side control and proceeds to full mount easily. Damkovsky attempts to escape but gives up his back as Figueroa has the hooks in. Figueroa goes back to full mount and starts unleashing some serious ground and pound on the champion. Damkovsky is only defending with some elbows over his face. Damkovsky has been opened up again and the ref steps in and stops the fight. Slightly early stoppage but I don't think Damkovsky could have improved his position. Figueroa does a little victory shimmy after the fight is stopped.  Excellent performance by Jose Figueroa. Pure domination once the fight went to the ground.

Round one: Magalhaes blitzes Doerr with a big takedown to get things started and passes to side control. Doerr retains half guard but Magalhaes immediately passes to mount. Beautiful guard pass from Magalhaes. Magalhaes glides to Doerr's back and latches on a body triangle. Doerr turtles up and Magalhaes drops big bombs to both sides of his head. The ref asks if Doerr is ok and Doerr doesn't have anything here and the ref steps in and stops the fight. Very impressive showing from Vinny Magalhaes.

Round two: Both men trade short blows inside and Norwood shoots for a takedown but eats a big knee from Horne. Horne takes top position temporarily but Norwood reverses him quickly and passes to half guard. Horne gets to his feet and lunges at Norwood with a big knee but Norwood takes him down with ease. Norwood takes side control and after some hesitation, finally opens up with some big strikes to the body. Norwood searching for a possible kimura but the referee stands them up. Horne throws a knee to the body and stuffs Norwood 's first takedown. Norwood shoots against the ropes and Horne attempts a guillotine, pulling guard in the process. Norwood easily slips out and takes top control. Not the best decision by Horne there. Norwood rises to his feet and eats two big upkicks from Horne.  Norwood dives back into Horne's guard and finishes the round in side control.  More positional domination from Norwood. 10-9 Norwood

Round three: Norwood immediately takes Horne down to start the round as Norwood is content to lay on top of him. The referee separates them and Norwood shoots in, slamming Horne to the canvas yet again, this time passing to side control. Norwood passes to full mount with 2:30 left in the fight but Horne is holding him close with both hands wrapped around his back. Norwood briefly postures up but goes back down and actually gives up the mount for some reason. After riding Horne for 30 seconds, Norwood passes to mount. He postures up with some decent strikes but a Horne hip bump pushes him forward throwing him off balance. The fight ends with Norwood opening up with decent strikes from mount. 10-9 Norwood and he should easily take a 30-27 decision here.

Round two: Flying knee from Sarnavskiy to open the round and Baker clinches him against the ropes, pushing him into the corner. Baker really working for the takedown and he almost has it but Sarnavskiy immediately pops back to his feet as both men trade knees in the clinch. Sarnavskiy corners Baker now and lands a big uppercut. Baker responds with a knee and Sarnavskiy responds with another uppercut. Takedown attempt by Baker is stuffed and he gives up his back as he tries to create distance. Sarnavskiy leaps on Baker's back. Baker falls and Sarnavskiy has the hooks in searching for the rear naked choke and he gets it!